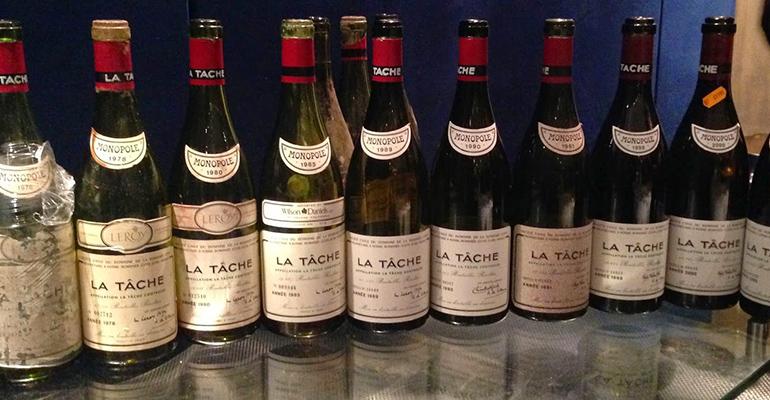 As wine crime rises, an expert samples a questionable bottle of 1962 La Tâche.

(Bloomberg) --What emotions do you experience when you’re about to open a bottle of 1962 La Tâche? Disbelief, unworthiness, reverence, awe, elation—the flip side of the famed Kübler-Ross five stages of grief. After all, the wine approximates the price tag of a Porsche 911.

Related: When an Empty Wine Bottle Is Worth $300

But there’s a sixth factor at play, as well: uncertainty. The collector sharing the bottle, acquired from a high-profile auction house, belatedly learned it was consigned by Rudy Kurniawan, the perpetrator of the world’s largest wine fraud, who’s currently serving 10 years in federal prison after counterfeiting more than $30 million worth of coveted wines. And he did it well enough to fool some extremely well-honed palates.

The 1962 La Tâche is a fabled vintage from Domaine de la Romanée-Conti and a strong contender for the title of Burgundy’s greatest red wine. A single bottle of the 1962 is all but impossible to locate, and the one before me was a 6-liter behemoth—the equivalent of eight 750-milliliter bottles—called a Methuselah.

Related: Fidelity Owes No Damages to Wine Mogul but Gets Finra Scolding

To make things more complicated, being a so-called Rudy wine didn’t guarantee the La Tâche would be a fake. Kurniawan—whose nickname was Dr. Conti because of his penchant for the fabled Burgundy—sold real bottles, too, which prolonged the con. As did buyers’ penchants for believing they were drinking an authentic treasure.

The Booming Business of Wine Crime

The uninitiated might be surprised to learn how often fine wine scams occur. In 2016 a retailer in Berkeley, Calif., was sentenced to more than six years in prison for running a wine Ponzi scheme—9,000 customers never received the bottles they paid for. In 2012 wine-storage warehouse owner Mark Anderson, also in Northern California, received a 27-year sentence—and was ordered to pay $70.3 million to clients—after selling their bottles and then setting the facility ablaze, ruining tens of thousands of additional bottles, including cases of the 2002 Whitehall Lane Napa Valley cabernet sauvignon. There’s also the French ex-con who in 2010 threatened to poison Romanée-Conti’s fabled vineyards if the owner refused to pay a $1 million-plus ransom. Even Bernard Madoff is associated with wine crime; some of the premium bottles in his collection were allegedly earmarked to entertain potential victims.

But no wine crime is more extensive than counterfeiting. Mostly it’s done with fine and rare wines; now, less remarkable wines are being targeted. In 2016, $400,000 worth of spurious Moët & Chandon Champagne were seized in Italy. A year earlier, fake bottles of Brad Pitt and Angelina Jolie’s inexpensive Miraval rosé were uncovered in China.

In the past decade, films and books have increasingly chronicled the intersection of wine and crime. The titles are colorful: Sour Grapes (a 2016 documentary about Kurniawan), Tangled Vines (a 2015 book covering the wine-storage arson), and Shadows in the Vineyard (another 2015 book, this one about the threat to Romanée-Conti). The latest is In Vino Duplicitas, from veteran wine writer Peter Hellman, which chronicles Kurniawan’s steep rise and fall. What I learned from Hellman’s book, coupled with my own experience of drinking Dr. Rudy’s handiwork, helps reveal why wine lovers are particularly easy marks.

As In Vino Duplicitas emphasizes, people are prone to “fooling ourselves into believing.” There is something about the proximity to a rare old bottle that induces a kind of dizzying frisson that suspends critical judgment. The late American poet William Matthews alluded to this feeling in his poem “La Tâche, 1962,” inspired by the very wine we opened: “Pulling the long cork, I shiver with a greed so pure it is curiosity. … I feel as if I were about to seduce somebody famous.”

There’s also a strong impulse against spoiling the fun. Those who are tempted to doubt a wine’s legitimacy often refrain from doing so because they don’t want to kill the buzz. Impassioned winos relish moments of bonhomie; interrupting them to whine about the wine would be tantamount to a needle scratch on a DJ’s prized vinyl selection.

Of all the “tells” in detecting a counterfeit, wine’s raison d’être—the taste—can ironically be an unreliable indicator of fraud. An authentic treasure may taste spoiled because of a bottling fault or improper storage. Even if it’s in good condition, the character of collectible wine can be off-putting to palates accustomed to conventional smells and tastes. Some of the world’s most coveted wines, especially after decades of aging, can be funky with undertones of mushrooms and dirt, or even something dogs leave behind.

When concocting counterfeits purporting to be fine, old Burgundy, Kurniawan would mix a bit of undistinguished, old Burgundy with excellent versions of young, California pinot noir, creating a believable blend that showed both youthful fruit and Burgundian funk. The result, when successful, could be highly seductive.

Even celebrated experts can’t always identify a bogus bottle by taste. British wine authority Michael Broadbent, whose nose has hovered over more auction-grade wine than anyone, once declared a 1787 bottle of Bordeaux thought to have been owned by Thomas Jefferson “sensationally good.” A brace of bottles from the same cache, sold to billionaire industrialist Bill Koch, were revealed to be a hoax. (Koch was also one of Kurniawan’s victims.)

As any interrogator knows, the most effective lies are spiked with some truth. Being seen at auctions, bidding on lots alongside the world’s whale collectors, widened Kurniawan’s smokescreen: Who would suspect a fellow collector of selling hoax wines? Especially because he mixed in legitimate bottles.

Kurniawan also gained traction by hosting wine dinners at which he treated fellow collectors to an endless array of special bottles. In the wee hours of a particularly Bacchic feast at the now shuttered New York wine destination Cru, Kurniawan’s posse allegedly ordered bacon-wrapped hot dogs to pair with their five-figure bottles.

Lubricating buyers at wine auctions helps, too. The house most closely associated with Kurniawan, Acker Merrall & Condit, plied bidders with liberal pours of collectible wine during its auctions, fostering a rollicking atmosphere compared with the more sedate sales run by old-line auction houses. If anyone doubted the authenticity of the bottles being sold, those concerns often evaporated after the second glass of Montrachet.

The Kurniawan affair was not the first wine counterfeiting case to make headlines, but it did mark the first time the U.S. Department of Justice pursued a wine counterfeiter. The details, outlined in In Vino Duplicitas, shine a revealing light on the growing scourge of wine fraud. Wineries are now experimenting with a variety of anti-counterfeiting techniques, including microprinted labels, high-tech etching on bottles, and embedded microchips that digitally authenticate the wine’s provenance. And experts have cropped up to help scrutinize ancient trophy bottles with the kind of detail normally reserved for celebrity autopsies.

Yet despite such efforts, high-end wine cellars continue to be compromised with questionable rarities. Given the inconsistencies inherent in rare wine, and the tendency for collectors to view their glass as half-full, the con threatens to thrive so long as the most coveted bottles continue to fetch sports car prices.

We prepared to open the ’62 La Tâche.

The label looked authentic. But it was sealed with the type of wax covering that could indicate a Kurniawan counterfeit, its color pinkish rather than a deeper red. Once the wax was removed, however, the cork showed correct branding—Domaine Romanée Conti, La Tâche, and 1962—printed on the cork. It also revealed age-appropriate decay (after decades in the bottle, a cork will show some deterioration, especially at the top, where the cork isn’t in contact with the wine and has a tendency to dry out; sometimes counterfeiters will insert a relatively fresh-looking cork in an “old” wine).

As we poured the wine into glasses, its color revealed itself to be a faded brickish hue consistent with mature Burgundy. We swirled, sniffed, and sipped: Was this an immortal wine or the gustatory equivalent of Al Capone’s vault?

To my surprise, the wine displayed no trace of the dull or shrill character one might expect of a sham bottle. It lacked some concentration, but that’s not unusual for a wine that has existed for more than a half-century. The wine did not taste fake.

In fact, the red showed a pleasing degree of the distinctive spice for which La Tâche is famous. At the risk of trying to describe the indescribable, this scent and taste—which I’ve found only in certain bottles of La Tâche—translate to an amalgam of licorice, soy sauce, beet, and tilled soil.

Another factor in the wine’s favor was its silky texture. One of the hallmarks of great Burgundy—or any special pinot noir for that matter—is a smooth, powdery feel that coats the mouth. The sensation did not linger here as long as it has in some epic wines, but there was an unmistakable satiny mouthfeel at play.

Had a La Tâche of a lesser vintage been substituted for the mythic 1962? Maybe the wine’s taste was helped by the fact that we wine lovers are optimistic. If a bottle fails to live up to our initial expectations, we hope that an odd aroma will blow off and that the bottle will “come around.” We happily drained the La Tâche, not totally convinced it was a fabrication.


To contact the editor responsible for this story: Kate Krader at [email protected]