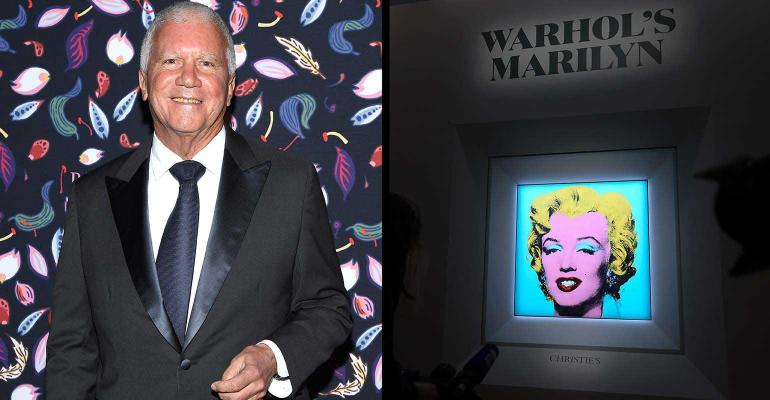 What you need to know about the businessman who managed to secure the most expensive work by an American artist sold at auction.

(Bloomberg) -- The sale of a vividly-colored Marilyn Monroe portrait by Andy Warhol for a record $195 million has drawn attention to Larry Gagosian, the winning bidder and art world mega-dealer. He has not revealed on whose behalf he bought the work.

Here’s what you need to know about the businessman who managed to secure the most expensive work by an American artist sold at auction.

Who is Larry Gagosian?

The owner of one of the largest art galleries in the world, Gagosian is often described as the world’s most important art dealer. The 77-year-old manages an art empire with 19 exhibition spaces spanning the world, from New York’s Madison Avenue to the heart of Hong Kong’s financial district.

Gagosian’s “mega gallery” business model has been a major force driving the art market’s worldwide expansion for the past two decades. His galleries have often put up major shows rivaling those of major museums, including a 2017 exhibition in London featuring Pablo Picasso’s works.

The grandson of Armenian immigrants, he studied English literature and swam competitively at UCLA. He then rose from selling posters in a parking lot in Los Angeles in the 1970s to becoming one of the art world’s most powerful figures.

“I didn’t have family in the business. I never worked for another gallery,” he told Bloomberg News in a 2020 profile. “So by nature, I’ve been a survivor and a scrappy businessman.”

He has represented Warhol, and sold the silk-screen Monroe image to Swiss art collector Thomas Ammann in 1986. Gagosian’s stable of artists has also included Damien Hirst, Jeff Koons, Takashi Murakami, Richard Prince and Cy Twombly, many of them poached from rivals.

Who does he deal with?

He has declined to comment on the sale of Warhol’s Shot Sage Blue Marilyn, after beating out bidders at Christie’s in New York. While Gagosian has not revealed details of his business or wealth, he is estimated to clear $1 billion in sales annually.

A guest takes a photo during Christie's announcement that they will offer Andy Warhol’s Shot Sage Blue Marilyn painting of Marilyn Monroe at Christie’s on March 21, 2022 in New York City. The work comes to Christie’s from the Thomas and Doris Ammann Foundation Zurich and all proceeds of the sale will benefit the foundation. (Photo by Dia Dipasupil/Getty Images)

What are his controversies?

Gagosian’s dealings with rich clientele has often put him in the middle of heated disputes, including a legal drama between New York billionaire Leon Black and a member of Qatar’s royal family over ownership of Picasso’s plaster “Bust of a Woman.” While Gagosian claimed to have bought the sculpture for Black for $106 million, an agent for Sheikh Jassim bin Abdul Aziz Al-Thani and the Qatar Museums Authority countered that they had struck an earlier deal for the artwork for $47.4 million. The two sides eventually reached a settlement in 2017, with Black getting the sculpture.

He has also acknowledged the high-brow nature of his dealings. “I believe in the popularizing of art. But when you get right down to it, it’s a bit of an elitist world,” he told the Wall Street Journal Magazine in 2016. “Not just economically elitist — how many people read poetry?”

--With assistance from James Tarmy.