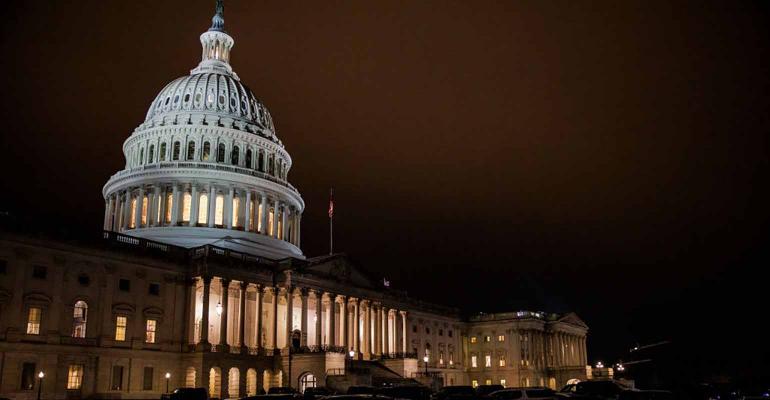 Here's where the bill stands before the Senate starts making changes.

(Bloomberg) -- The House on Friday passed a roughly $2 trillion bill incorporating the core of President Joe Biden’s economic agenda -- ramping up funding for the social safety net and increasing taxes on corporations and the wealthy -- sending it on to the Senate, where it’s likely to be significantly reshaped.

The legislation will likely undergo several more changes, both to get all 50 members of the Senate Democratic caucus on board with it, and to comply with the chamber’s complicated rules to avert a filibuster, in face of Republican opposition.

Here’s where the bill, which passed the House without any GOP support, stands and what is likely to change:

The bill imposes a 15% minimum corporate levy on companies that have traditionally been able to pay little-to-no taxes because they were eligible for a long list of credits and deductions. It also includes a 1% excise tax on companies when they buy back their own stock. The 21% corporate rate is left untouched, maintaining a key part of President Donald Trump’s 2017 tax law.

Related: Latest Update on the Build Back Better Act for Estate Planners

A 15% global minimum tax on corporations’ foreign profits is set -- implementing a key portion of a deal made with approximately 140 countries earlier this year. There’s also a series of changes that would increase taxes on companies that shift their profits offshore.

A millionaire surtax would place a 5% levy on individual incomes in excess of $10 million and an additional 3% tax on those over $25 million. There’s a 3.8% investment income tax for high earners who own businesses and a limit on how business owners can use losses to reduce their taxes. The plan puts a $10 million cap on individual retirement accounts, after concerns that some wealthy individuals were using these tax-advantaged vehicles to skirt IRS bills.

This is likely to undergo changes in the Senate, where key members, including Bernie Sanders of Vermont and Bob Menendez of New Jersey, said they prefer to focus on limiting the universe of people able to claim the SALT deduction to those earning under a certain amount -- potentially around $400,000 a year.

The bill would give the Internal Revenue Service an additional $80 billion to hire more auditors, improve customer service and modernize technology. Democrats hoped to pull in an additional $400 billion in new revenue from cracking down on tax cheats and increasing compliance. But CBO concluded IRS enforcement would raise $207.2 billion over a decade, or $127.2 billion after subtracting the $80 billion in additional funding for the agency, according to a footnote in the estimate. However, it is not included in the official tally because of certain budget estimating rules.

The bill would extend through 2022 the extra $250-to-$300 monthly payments per child that parents earning up to $150,000 are now getting. The legislation also makes the tax credit permanently refundable. Democrats are hoping the popularity of the enlarged benefit means they can extend it further in the future.

The plan approves funding for children under five, as well as increases in wages for childcare workers. The amount parents pay for child care would be capped, to ensure that no family pays more than 7% of their household income.

The plan includes funding for states to start or grow universal pre-kindergarten for three- and four-year-old children. States would be directed to begin rolling out the programs in high-need and low-income areas first before expanding to other areas.

A last-minute addition to the House package provides four weeks of paid parental and medical leave, starting in 2024, for workers who don’t receive such a benefit from their employers. The House had dropped the measure last month, but reinstated it after pressure from lawmakers and the public. The idea is likely to continue being debated in the Senate, where Senator Joe Manchin, a West Virginia Democrat and crucial swing vote, has said he is concerned about the cost.

Some $300 billion -- by far the largest component of the climate spending in the package -- would go to expanding a slew of tax credits for renewable power, electric vehicles, biofuels and energy efficiency. The credits could accelerate investments in both utility-scale and residential clean energy as well as electricity transmission, power storage and clean-energy manufacturing.

Plans would block oil drilling in most U.S. offshore waters and Alaska’s Arctic National Wildlife Refuge. Oil and gas companies would be forced to pay for excess methane leaking from wells, storage sites and pipelines for the first time. That methane provision could be watered down in the Senate, however, according to analysts.

Under the bill a $7,500 consumer tax credit would be made refundable and expanded by $4,500 for cars assembled domestically by plants represented by unions. An additional $500 bonus would be added for vehicles that use batteries made in the U.S for a total of $12,500. The legislation also creates a new $4,000 tax credit for the purchase of used electric vehicles.

The bill would empower the government to negotiate with pharmaceutical companies on drugs that have been on the market for at least seven years, or longer for more complex medicines. Drugmakers would be required to rebate the government for raising the price of their product above the pace of inflation, starting in 2023.

The package represents a massive investment in bolstering the Affordable Care Act to make good on the health law’s promise of reasonably priced insurance coverage. It would extend boosted premium subsidies into 2025 and offer a new tier of low-cost plans to people in the 12 states that have declined to expand their Medicaid programs under the ACA.

One of the largest investments the package makes is in Medicaid’s home- and community-care programs. Democrats are proposing to inject states with $150 billion to give more elderly and disabled Americans the opportunity to get long-term care at home as well as to boost pay for home care workers.

For the first time, Medicare would cover hearing services for seniors if the bill were enacted into law. Progressive Democrats had pushed for a much wider expansion of Medicare benefits, including dental and vision services, but were blocked by party moderates like Manchin. Sanders has said he still wants dental and vision benefits to be added back.

The House measure would offer parole status to an estimated 6.5 million undocumented immigrants who entered the U.S. before 2011, offering deportation protections and work permits if they meet certain requirements. It’s a big step away from the pathway to citizenship initially sought by Democrats in both chambers, but the Senate parliamentarian has twice rejected proposals in that chamber that would do that -- arguing that they aren’t budget-oriented enough to qualify for the so-called reconciliation process that bypasses a Senate filibuster.

--With assistance from Laura Litvan.