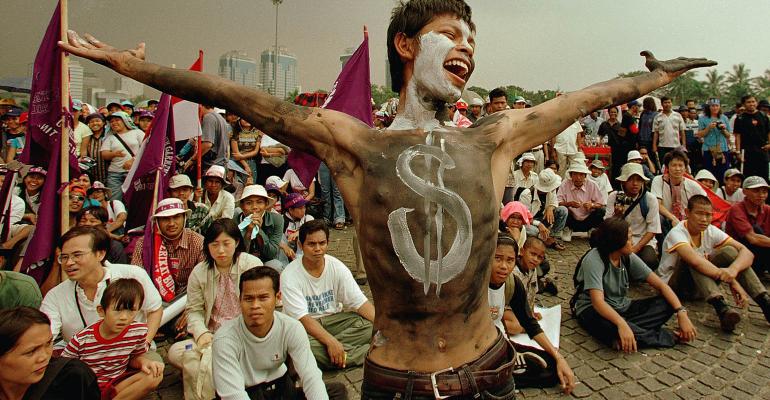 Things are looking rosy for American billionaires and millionaires as wealth accumulation goes into overdrive.

(Bloomberg) --It’s an excellent time to be rich, especially in the U.S.

Around the world, the number of millionaires and billionaires is surging right along with the value of their holdings. Even as economic growth has slowed, the rich have managed to gain a larger slice of the world’s wealth.

Rising inequality is of course no surprise. Reams of data have shown that in recent decades the rich have been taking ever-larger shares of wealth and income—especially in the U.S., where corporate profits are nearing records while wages for the workforce remain stagnant.

In fact, while global inequality is simply accelerating, in America it’s gone into overdrive. The share of income going to the top 1 percent in the U.S. has more than doubled in the last 35 years, after dropping in the decades after World War II (when the rich were taxed at high double-digit rates). The tide shifted in the 1980s under Republican President Ronald Reagan, a decade when “trickle-down economics” saw tax rates for the rich fall, union membership shrink, and stock markets spike.

Now, those policies and their progeny have helped put 63 percent of America’s private wealth in the hands of U.S. millionaires and billionaires, BCG said. By 2021, their share of the nation’s wealth will rise to an estimated 70 percent.

The world’s wealth “gained momentum” last year, BCG concluded, rising 5.3 percent globally from 2015 to 2016. The firm expects growth to accelerate to about 6 percent annually for the next five years, in both the U.S. and globally. But a lot of that can again be attributed to the rich. The wealth held by everyone else is just barely growing.

Where is all this wealth coming from? The sources are slightly different in the U.S. compared with the rest of the world. Globally, about half of new wealth comes from existing financial assets—rising stock prices or yields on bonds and bank deposits—held predominately by the already well-off. The rest of the world’s new wealth comes from what BCG classifies as “new wealth creation,” from people saving money they’ve earned through labor or entrepreneurship.

In the U.S., the creation of “new” wealth is a minor factor, making up just 28 percent of the nation’s wealth increase last year. It’s even lower in Japan, at 21 percent. In the rest of the Asia Pacific region, meanwhile, two-thirds of the rise is driven by new wealth creation.

Political changes could boost the riches of American millionaires even further. After the 2016 election, U.S. stocks rose as investors hoped Republican President Donald Trump and a Republican Congress would agree to eliminate regulations and lower corporate tax rates. The wealthy may also get a tax cut as part of the bargain. For example, the American Health Care Act, passed by the U.S. House of Representatives to repeal and replace Obamacare, includes the elimination of taxes paid almost exclusively by the top 1 percent.

“No one knows” what kind of tax changes will become law, said BCG senior partner Bruce Holley. However, “this could buoy the [growth in U.S. wealth] that we are predicting.” Unsurprisingly, for a country where almost a quarter of income goes to the rich and where they hold the highest concentration of wealth, a big chunk of the world’s richest call America home. Two out of five millionaires and billionaires live there, and their ranks are growing fast. There are now about 7 million Americans with more than $1 million, and BCG expects 10.4 million millionaires and billionaires in the U.S. by 2021. That’s an annual growth rate of 8 percent, or about 670,000 new millionaires each year.

Millionaires are far rarer in the rest of the world than in the U.S., where 5.7 percent of all households own more than $1 million in assets. The only countries with a higher concentration of millionaires are much smaller nations, such as Bahrain, Liechtenstein, and Switzerland, most with a reputations as havens for the wealthy. China has the second most millionaires and billionaires, at 2.1 million, though its population is four times the size of America.