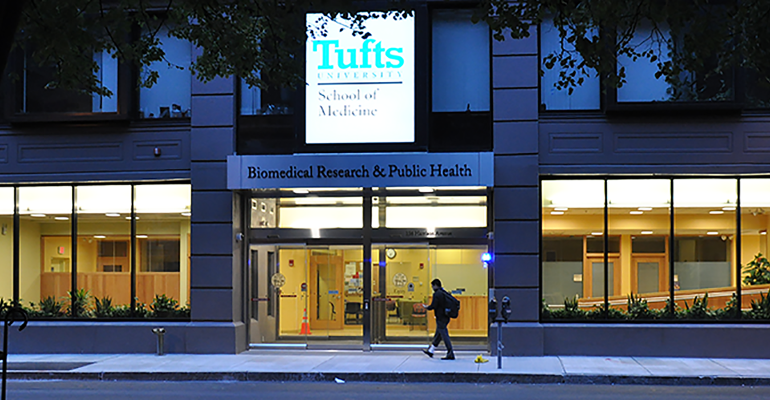 The latest development in the growing trend of rejecting gifts from 'tainted' donors.

The president and chairman of the Board of Trustees of Tufts University in Medford, Mass., issued a letter on Dec. 5 announcing their decision to remove the Sackler name from Tufts’ graduate/medical schools.

The open letter specifically noted that the decision to remove the Sackler name wasn’t meant to erase the involvement with Arthur M. Sackler, who died in 1987, a decade before Purdue Pharma introduced OxyContin, the drug at the center of the opioid crisis. “Our students, faculty, staff, alumni, and others have shared with us the negative impact the Sackler name has on them each day, noting the human toll of the opioid epidemic in which members of the Sackler family and their company, Purdue Pharma, are associated,” the letter stated. The letter also described Tufts’ plan to create an educational exhibit within the medical school to explain the Sackler family’s involvement with Tufts and to educate the community about the opioid epidemic.

The letter also shared the findings of Donald K. Stern, former U.S. attorney for Massachusetts and attorney Sandy Remz, both of whom were commissioned in February 2019 to conduct a review of Tufts’ relationships with Purdue Pharma and the Sackler family. The report issued by Stern and Remz found no wrongdoing by Tufts or its personnel and no evidence of any material impact on instruction or research.

The report also issued recommendations for Tufts to implement in the future to avoid the appearance of influence, including adopting stronger screening procedures for donors, enhancing its gift policies, developing more stringent conflict-of-interest policies, strengthening compliance practices and leadership and developing publicly available guiding principles for gift acceptance. Tufts will implement these recommendations as soon as possible.

The open letter further noted the establishment of a $3 million endowment to support education, research and civic engagement programs designed to prevent and treat addiction and substance abuse.

The president’s open letter and the U.S Attorney’s “Report and Recommendations Concerning the Relationship of the Sackler Family and Purdue Pharma with Tufts University” can be found at https://president.tufts.edu/news/2019/12/05/important-announcement/ and https://president.tufts.edu/wp-content/uploads/Final-Report-Tufts-Sackler-and-Purdue-Pharma-December-2019.pdf, respectively.

The announcement is part of a larger trend of sending back gifts from so called “tainted” donors.

Charities are under intense scrutiny to examine the source of their donations to ensure they aren’t coming, directly or indirectly, from what some in the public sphere may consider undesirable donors. And in some cases, they need to return those donations or, like Tufts did, remove the names of those donors from their buildings/programs.