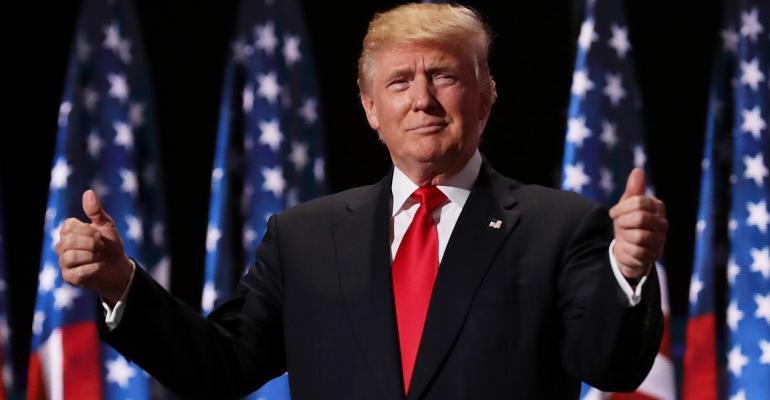 (Bloomberg) -- A new question surrounding Republican presidential nominee Donald Trump’s business empire emerged recently, thanks to the publication of a 1995 New York state tax document: How could he have had a $916 million personal loss from troubled ventures that burned his creditors?

Now tax-law practitioners and academics have put forth a possible answer: Trump may have used a strategy that allowed struggling real-estate investors to turn unpaid debts into personal tax breaks.

Congress ended that controversial practice in 2002. Back in 1995, though, Trump could have used it to account for more than 90 percent of the loss described on the form, according to three tax specialists. Lenders forgave more than $800 million in bank debt that Trump had personally guaranteed in the early 1990s.

“All we’ve seen is one piece of his 1995 return, but it is exceedingly likely this is what happened,” said Richard Lipton, a tax lawyer who specializes in partnerships and real-estate transactions at Baker & McKenzie LLP in Chicago. Two other tax attorneys agreed with Lipton’s analysis. They asked not to be named because the issue is politically sensitive.

Most taxpayers have to treat debt forgiveness as taxable income -- as though their lender simply gave them money. But under the now-defunct rules, certain troubled investors could not only avoid paying taxes on forgiven debt, they could also turn it into a loss they could use to reduce their taxes further.

However, without more information -- such as Trump’s actual federal return for 1995 or other years -- it’s impossible to say for sure that he used that method. Trump’s campaign didn’t respond to a request for comment for this story.

Trump, a billionaire businessman whose foray into the casino business in the 1980s and ’90s ended in a string of bankruptcies, has departed from 40 years of tradition for presidential candidates by not releasing any of his tax returns or tax information. He says he’s under an audit by the Internal Revenue Service and will release returns once the audit is over.

His campaign has neither confirmed nor disavowed state tax documents that the New York Times published on Oct. 1, which showed Trump recording the $916 million loss in 1995. But Trump’s accountant at the time has said they appear to be authentic.

Trump has said he used tax laws “brilliantly” to recover from difficult times in the early 1990s. He has also said his knowledge of the U.S. tax code puts him in position to overhaul it to make it fairer.

“The unfairness of the tax laws is unbelievable,” Trump said during a campaign appearance in Colorado this week. “It’s something I’ve been talking about for a long time, despite frankly being a big beneficiary of the laws. But I’m working for you now.”

However, Trump’s former accountant has called the candidate’s tax expertise into question. In an interview with CNN, Jack Mitnick, a retired tax lawyer and CPA, said Trump had “virtually zero” involvement in creating his 1995 tax returns. Asked if Trump had displayed brilliance regarding the tax code, Mitnick responded: “Not when I dealt with him.”

Democratic nominee Hillary Clinton, who has posted nine years’ worth of tax returns online, has suggested that Trump’s decision not to release his returns is aimed at hiding information that might damage him politically. She has speculated that he hasn’t paid any federal taxes in several years.

One of the 1995 state tax documents offered support for that theory. Assuming the document’s validity, the loss reflected on it would have allowed Trump to avoid taxes on as much as $916 million in income over an 18-year period, under provisions that were in effect in 1995. Taxpayers are allowed to deduct losses against their income.

The question that has fascinated tax specialists has been: What might have produced a loss that large? The theory that Lipton and others have described involves two steps.

It begins with the forgiveness of outstanding debt. Typically, borrowers must declare such forgiveness as taxable income -- but there are exceptions, including for canceled debts related to real-estate development. The logic behind it is that certain businesses that come close to financial ruin need a fresh start and shouldn’t be burdened with new tax liabilities when they’re already struggling.

A second step transforms the forgiven debt into a usable loss for tax purposes. Before 2002, owners of a certain type of real-estate business could add the value of their forgiven debts to the “basis” of those entities. Basis is a tax term that refers to what an investor has paid for an asset -- a key determiner of how gains and losses are counted for taxes. Increasing an investor’s basis in a troubled entity makes it possible for the investor to claim deductible against the new, higher value.

Real-estate investors who used certain business entities called “S corporations” could use their higher basis from forgiven debts to realize net operating losses -- which would then be deductible on their personal income tax returns. Unlike so-called “C corporations,” which typically are large, publicly traded firms that pay their own income taxes, S corporations pass their earnings through to their owners, who then pay tax at their individual rates.

The U.S. Supreme Court upheld that benefit in a controversial 2001 case known as the Gitlitz decision. For real estate developers, it meant “a result that seemed too good to be true,” Lipton said. Congress reacted by shutting down the benefit the next year; earlier transactions were grandfathered.

“What happened to the taxpayer in Gitlitz helps explain what probably happened to Trump,” wrote Lee Sheppard, a tax columnist for Tax Analysts, a trade publication, on Oct. 4.

It’s not clear whether Trump used S corporations in the 1990s, though he testified in a 2013 deposition that he had used the structure to develop later real-estate projects in Las Vegas and Chicago.

But it is clear that Trump’s real estate and casino businesses went through bad times in the early 1990s. Casinos he developed -- the Trump Taj Mahal, Trump Castle and Trump Plaza and Casino -- declared bankruptcy in 1991 and 1992. Trump also sought bankruptcy protection on the Plaza Hotel in Manhattan, which he’d bought in 1988.

He worked out arrangements with lenders to forgive debt. In his 1997 book, “The Art of the Comeback,” Trump wrote that “by 1993 … my personal debt of $975 million had been reduced to $115 million, and I had two years to finish cleaning it up. There was no way to deny that things were going really great.”

While he seems to have been able to use that forgiveness to generate a tax benefit, the precise method remains unclear, said Edward Kleinbard, a law professor at the University of Southern California in Los Angeles.

“Here’s a guy who lost a lot of money that wasn’t his and flipped it back into a tax asset for himself,” said Kleinbard, a former chief of staff of the congressional Joint Committee on Taxation. There’s only one way to know how he did it, Kleinbard said. “He should release his tax returns.”