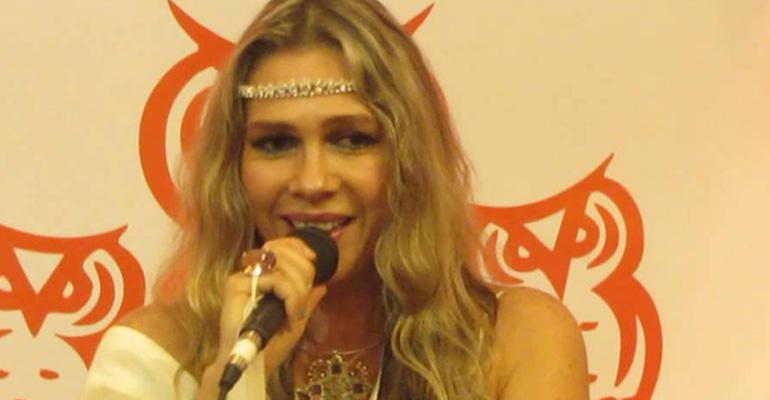 Lorena Tassinari, a former Mexican soap opera star, has been rebuffed at every attempt to claim some of her late husband's estate.

(Bloomberg) --When Lorena Tassinari walked into a Dallas courtroom to claim a share of Mexico’s largest tortilla fortune, she had all the charm and fame of a former telenovela star on her side.

She still walked out with nothing. Tassinari says she married the late tortilla king, Roberto Gonzalez Barrera, aboard his luxury yacht and shared his final three years. But the Texas judge, like predecessors in Mexico, ruled in favor of Gonzalez’s wife of half a century, Graciela Moreno Hernandez.

The legal saga isn’t quite over: Tassinari has appealed the latest verdict. Still, after five years and multiple lawsuits on both sides of the border, it’s the matriarch who has emerged victorious at every point. She has control of Gruma SAB de CV, the world’s largest tortilla maker -- and a net worth of $2.6 billion, according to the Bloomberg Billionaires Index.

Tassinari, a singer and actress in early 1990s Mexican soap operas “Muchachitas” and “Balada por un Amor,” said she married Gonzalez in the Caribbean in the summer of 2009. After his death at the age of 81 from pancreatic cancer in August 2012, she claimed she was entitled, as his surviving spouse, to a piece of the fortune he left his family.

In her telling, Gonzalez enjoyed a second lease on life in his final years, when they were together. Tassinari said she wasn’t after the money. “I’m only looking for dignity, honesty, and to defend my morals,” she said in a phone interview. “I know how to live with nothing, and with everything.”

The singer’s courtroom defeat has confirmed Graciela Moreno as the main owner of Gruma, which has a market value of about $6.1 billion. She’s the head of the family that controls 52 percent of outstanding shares, according to the company’s 2016 annual report. Her son, Juan Antonio Gonzalez Moreno, serves as chairman and chief executive. He’s the only member of the family’s younger generation to take an active executive role, and controls a 10.9 percent stake. The family declined to comment on the net worth calculation, and Graciela Moreno declined via Gruma representatives to be interviewed.

Gonzalez married Graciela in 1949, the same year that he and his father founded Gruma’s precursor, a small corn mill.

The company’s brands like Mission tortillas and Maseca flour are now staples for shoppers in America as well as Mexico. But it struggled initially -- partly because Gonzalez was trying to persuade Mexicans to embrace a new type of dehydrated corn tortilla. Most preferred the fresh ones they could get from street vendors.

The innovation began to catch on, and the business grew. By the 1980s, a sign of Gruma’s success was the friendship that had blossomed between the Gonzalez family and that of Carlos Salinas de Gortari, who became Mexico’s president in 1988.

The friends helped each other out. Favorable legislation for companies in the tortilla business from the Salinas government helped take Gruma to another level, and led to claims of favoritism that lingered long after the Salinas government left office in 1994. Subsidies for tortilla production made up 43 percent of the company’s net revenue that year, according to a New York Times report two years later. The Times said then that Gruma didn’t respond to requests for comment on the relationship, and its role in the company’s growth; nor did it do so when contacted by Bloomberg last month.

When Salinas -- engulfed by allegations of corruption and fraud -- left Mexico shortly after his term ended, he did so aboard a corporate jet belonging to the tortilla baron whose fortune he had helped build.

A 16-passenger jet belonging to Roberto Gonzalez was among the assets that lawyers haggled over. Others included a home in Texas, and the yacht where Tassinari and Gonzalez held their wedding ceremony.

It was named Xilonen V -- after one of Tassinari’s songs, released in 2012, which she said had been Roberto Gonzalez’s favorite. In the video, Tassinari appears as Xilonen, an Aztec goddess of corn, wandering through a field. The vessel now belongs to the Moreno family, and has been renamed the Aquavita, according to Tassinari’s lawyers.

Central to her Dallas lawsuit was the claim that Graciela and her husband were divorced. But documents submitted during the case showed that a Mexican court had declared the divorce null and void, because Moreno “was never served, did not appear, and was not represented in the proceeding.”

Both parties in the case struggled to establish other basic facts, such as where Gonzalez was resident when he died; one side said Texas, the other Mexico. While the case ground on, Gruma’s shares were delisted from the New York Stock Exchange in 2015. They’re now traded only in Mexico.

In March 2017, Judge Brenda Thompson dismissed the case. Tassinari made another attempt, alleging that Graciela had used a fake birth certificate to get her divorce annulled. She failed again. It looked like the legal marathon might be over. “At this moment there is no case on this matter in any court in Mexico or the U.S,” Gruma corporate communications director Fernando Solis Camara said by email last month.

And then, on July 7, Tassinari filed an appeal, one that may represent her last chance.

Regardless of the outcome, Tassinari said she’d be happy. She’s working on more music and a book.

“It was an incredible relationship and I loved him with all my heart,” she said. “I haven’t received one call from the family saying, ‘Thank you for taking care of my father in his last four years.’ That’s all that I want.”