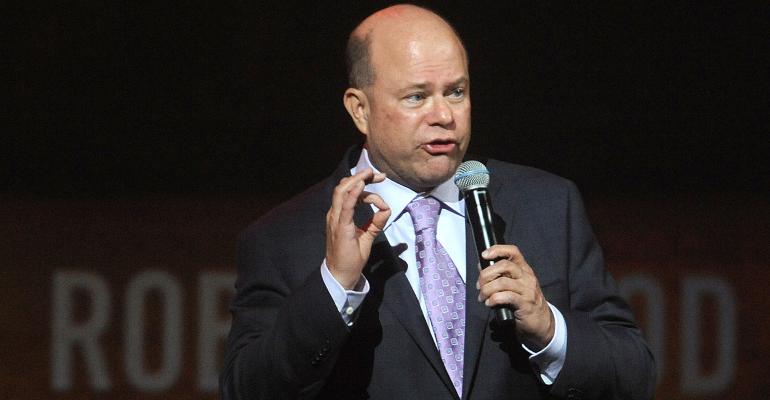 With the Republican tax overhaul, hedge fund titan David Tepper can write off his $2.3 billion purchase of the NFL's Carolina Panthers over 15 years.

(Bloomberg) --As David Tepper can attest, buying a professional sports team is getting expensive. The hedge fund titan paid $2.3 billion to become the new owner of the Carolina Panthers, a record price for a National Football League franchise.

Ownership has its privileges, though. You get to hang out with the league’s best athletes. Everyone wants to be your friend when the season rolls around. And then there’s the tax perks.

The Republican tax overhaul, signed by President Donald Trump in December, tweaks some provisions affecting sports franchises, while leaving in place the most important one. Because of quirky rules, even profitable teams can generate paper losses that erase the tax bills on an owner’s other business interests.

Tepper, 60, founder of Appaloosa Management, will be able to write off his purchase over 15 years, giving him about $150 million annually to offset any team profits or his other business income.

Effectively, “he’ll get to own the team tax-free as long as he wants to hold it,” said Rodney Fort, a sports management professor at the University of Michigan. The windfall is based on a “wacky” provision in the tax code, Fort said, which treats the intangible assets of a sports team -- like the player roster and TV deals -- similarly to the tangible assets of other businesses. The Internal Revenue Service treats a player contract much like a piece of factory equipment that gradually wears out over time.

The new tax law does limit the amount of losses from one business that can be used to offset a wealthy taxpayers’ salary or investment income. The tax revamp also changes the rules on how losses can be carried over from year to year.

Overall, the tax law is “favorable for paying up for a sports team,” said James Cundiff, a partner at McDermott Will & Emery LLP in Chicago. “But some of these changes at the edges can be painful.”

The tax benefits are rarely the main motivation of someone buying a sports franchise, according to advisers who work with team owners. For one thing, teams often operate at a loss, Cundiff said, requiring regular cash infusions to pay for star players, for example.

Even with the best tax planning, most sports franchises don’t make sense as an investment based on traditional valuation metrics, said Eric Nemeth, a partner at law firm Varnum LLP in Detroit. Still, values of professional teams keep climbing, as an increasing number of wealthy people want to own a limited number of them.

Tepper, who moved his firm and residency to Florida from New Jersey, has a net worth of $10.2 billion, according to the Bloomberg Billionaires Index, a ranking of the world’s 500 richest people. Institutional Investor estimates he earned $1.5 billion in 2017. He also owns a minority stake in the NFL’s Pittsburgh Steelers, which league rules require him to sell.

If he really wants to make money on the Carolina Panthers, Tepper should hope the value of NFL franchises keep rising. “You’ve got to find the next buyer who is willing to pay more,” Cundiff said.