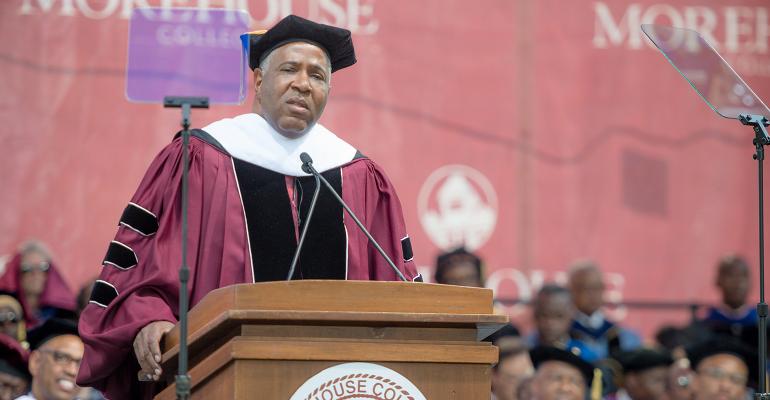 Marcus Ingram/Getty Images Entertainment/Getty Images
Billionaire investor Robert Smith announced in his commencement address he would pay off all of the student loan debt of the entire graduating class at Morehouse College.
Wealth Planning>High Net Worth

No good deed goes untaxed, so who has to pay?

Search on the web  “best commencement speech,” and you might find yourself (re)listening to U.S. investor Robert F. Smith’s pledge to the 396-member class of 2019 graduates at Morehouse College: “We are going to put a little fuel in your bus ... My family is making a grant to eliminate their student loans.” I imagined donning a commencement cap there and thinking, “Wow.”  As I switched back to my tax attorney hat, my reaction was: “What are the transfer and income tax consequences here?” Some estimate this gift to be $40 million. Here are some initial thoughts on potential tax consequences to relevant parties.

If Robert and his spouse, Hope Dworaczyk, make a one-time gift to each student to wipe out all their debts, the two would be able to gift up to $22.8 million gift tax-free. Assuming no prior taxable gifts have been made, each individual currently has up to $11.4 million of lifetime estate and gift tax exemption. The remaining $17 million of the $40 million, however, would be subject to a 40% gift tax rate.  Given the large tax consequences to Robert and Hope, this is unlikely the strategy for them.

Alternatively, if the gifts are spread out over multiple years, each gift to a student may be given gift tax-free. Robert and Hope can take advantage of the IRC Section 2503(b) annual gift tax exclusion such that each individual can currently gift up to $15,000 per individual, per year, without incurring gift tax or using the lifetime exemption. Structured this way, each payment (Robert and Hope, together) can be up to $30,000 per student per year to be used to pay off the student’s debt. The downside is that the debt for some students won’t be cleared off in just one year if their debt is greater than $30,000. And of course, the downside for Robert and Hope is the lack of a charitable deduction.

Tax Issues for the Students?

Picking up from above, if the students received amounts from Morehouse or another charity, there may be an inclination to call it a scholarship and not classify the amounts as income to the students. However, IRC Section 117 states that only  “qualified scholarships” are exempt from gross income. To be a qualified scholarship, amounts received have to be used for qualified tuition and related expenses (for example, tuition required for enrollment and fees, books and supplies). Furthermore, the recipient has to be a candidate for a degree. Since the students have graduated, they don’t appear to satisfy any of these conditions. Absent another exclusion, a student may have to pay income tax on such amounts received.

If, instead, Robert and Hope gift directly to the students, there may be no tax effect on the students. Under IRC Section 102, gross income doesn’t include amounts received by gift. This is because tax, if any, is incurred by the donor through the gift tax. As mentioned above, if Robert and Hope distribute annual exclusion amounts across multiple years, the amounts won’t likely generate any gift tax.

School or Other Charitable Vehicle

A donor like Robert, who wishes to take a charitable deduction, must obtain a written acknowledgement from the charity for any single cash contribution of $250 or more. As a routine matter, the nonprofit should provide Robert with an acknowledgment letter for the year of the gift. Under Treasury Regulations Section 1.170A-13(f), the written acknowledgment from the charity to the donor should consist of: name of organization, amount of cash contribution, description of any noncash contribution and statement on whether any goods or services were provided by the organization to the donor in return for the contribution.

Under IRC Section 501(c)(3) and its governance documents, a public charity may make grants to individuals that further the charity’s charitable purposes, such as scholarships. As Morehouse is a college institution, awarding grants to students who’ve graduated doesn’t appear to further its charitable purpose of education.

For a PF, distributions to individuals may be scrutinized as a taxable expenditure under IRC Section 4945(g). Generally, unless a grant is for one of the following, it may be a taxable expenditure to the PF: (1) a scholarship grant under IRC Section 117 (described generally above), (2) a prize or award made in recognition of religious, charitable, scientific, educational, artistic, literary or civic achievement and recipient is selected from the general public, or (3) “[t]he grant's purpose is to achieve a specific objective, produce a report or similar product, or improve or enhance a literary, artistic, musical, scientific, teaching, or similar capacity, skill or talent of the grantee.” It may be difficult to fit the facts within these definitions. If there’s a taxable expenditure, there’s a penalty tax of 20% imposed on the expenditure amount on the PF and, if the transaction isn’t corrected, a tax of 100% imposed on such amount.

“I know my class will make sure they pay this forward.” The gift pledged by Robert to Morehouse class of 2019 is a worthy cause (and certainly pulls the “wow factor”) but that, by itself, doesn’t necessarily result in a charitable deduction or tax-free gift. As described above, the details and structures matter and may create different tax outcomes. Presumably, someone as financially savvy as Robert has considered this carefully with advisors instead of making this remark off the cuff. It’s the ingenuity in structuring that’s the interesting part to those who advise wealthy philanthropists. For the students—it will be the generosity that’s the part that understandably grabs their attention.

Lawton C. Leung is an associate with Withers Worldwide. His practice focuses on domestic and international tax, trust and estate planning for high-net-worth individuals and their families.