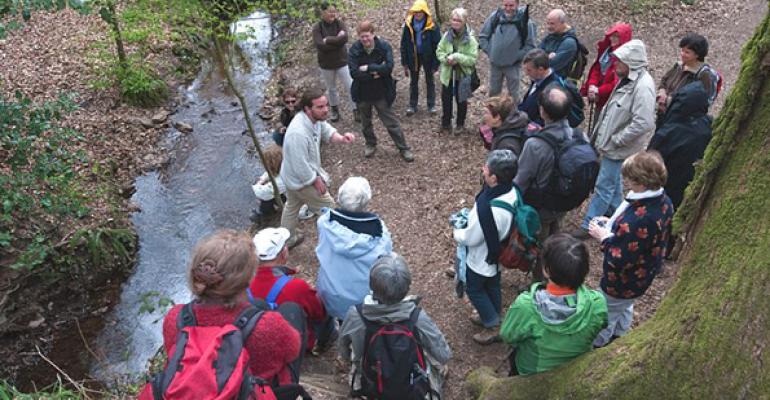 Since ancient times, storytellers have passed along wisdom, engaged the imagination and fostered community.  And Spellbinders, a non-profit network of volunteer storytellers, has brought back this age-old tradition in classrooms around Colorado and a handful of other states.

Recently, Kendall Haven—who is both a scientist and a professional storyteller—addressed the Spellbinders annual meeting in Denver.  According to Haven, the established use of stories and storytelling goes back somewhere between 100,000 and 300,000 years.  And some anthropologists argue that language evolved because of the need to tell stories.

For millennia, day after day, humans sat around flickering campfires telling stories.  That’s how members of the tribe learned about their history, the nature of the world and…you name it.  Today, we sit in front of flickering screens of one sort or another passively soaking up stories told (or performed) by others.

When’s the last time a member of your tribe told a family story?  Maybe at Christmas or Thanksgiving?  Or in a birthday toast?

I thought about this the other day while preparing to address 50 or so members of a remarkable family over dinner.  Those attending would range in age from 93 years to four months, representing four generations.  For 150 years, this family has sought to live up to the Biblical passage:  “From everyone who has been given much, much will be demanded; and from the one who has been entrusted with much, much more will be asked.”

As the dinner plates were cleared, I decided to put on my own “scientist hat," and tossed my prepared comments.  Why not get this multi-generation gathering to carry out an "experiment" to bring home the power of story?

The tale of the founder of this family’s wealth is a familiar one.  You could look it up in Wikipedia—the stuff that legends are made of, as they say.  But what about the scores of “little stories” that this, and every other family, has? The ones that describe events that happen when no one is looking?

Every member of the family was paired up with a relative from a different generation.  Each shared with the other a positive story—an account of a tangible moment in time when the storyteller was at his best.

As stories were told, the energy in the room soared.  Excited voices. Occasional laughter.  Here and there, tears flowed.

At the end of the exercise, a senior member of the family took the mike. “These are our family’s stories.  Each by itself is a brightly colored thread. Together, they weave a beautiful tapestry.”  And then, on the spur of the moment, he announced creation of the family’s Tapestry Project to collect and archive all the “small” stories.

Since storytelling is how we communicate best, learn best and remember best— “tapestry”-type projects make a lot of sense.  And who’s better positioned to spearhead the project than a family office principal or a family trustee?  Maybe with a little help from you, the trusted advisor?

Family mission statements are all the rage.  And, they’re often accompanied by bigger-than-life stories centered on the founder.  But, in the absence of flesh-and-blood stories told by “ordinary” folk, mission statements begin to look like slogans you see on the coats of arms that museums house behind glass.

Tapestry projects have another benefit.  Founder’s stories often are told with heroic stature.  Inspiring, perhaps, but too often bereft of life’s lessons for those struggling with more modest, although no less challenging, problems. Like the seven-year-old who’s mortified and doesn’t have a ready response when a classmate taunts, “I hear your family is rich.”  Or the co-ed who has trouble knowing whether a boy is more interested in her or in her family’s wealth.

A closing bit of advice suggested by Kendall Haven: When the little ones (and even the big ones) have gathered round, don’t read stories to them.  Tell the stories.  And watch both the circle of listeners and their smiles grow.