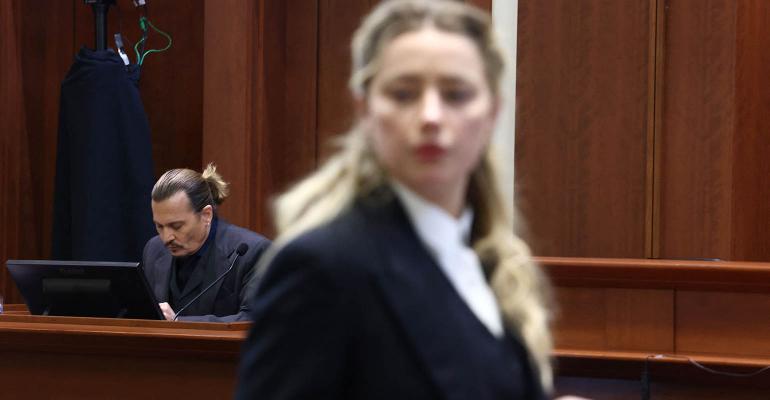 When dirty personal laundry is aired in public court proceedings, both parties will lose.

What's eating Johnny Depp? Defamation litigation, that's what. The Hollywood heartthrob is set in a bitter battle of wills and words with his former wife Amber Heard in his libel case against her in Virginia over an op-ed she wrote for The Washington Post.

With the trial nearing closing arguments, let's take a quick intermission to remind ourselves of the plotlines, and to query whether there can be a reputational happy ending for either of them.

The Virginia case is part rerun, part sequel and part remake: The plotlines have largely been run out before in England; some characters feature in both the original and Depp Rehabilitation Part 2; unusually for a remake, however, here there is the possibility of a different ending.

Johnny Depp sued News Group Newspapers (NGN), publishers of the British tabloid The Sun, over an article that labeled him a "wife beater." His former wife was not a party, but she was the newspaper’s star witness. In the Royal Courts of Justice in London, the former Mr. and Mrs. Depp found themselves locked in a fight to the reputational death during weeks of trial featuring vicious barbs and the exposure of private information, brought to light and dissected during intense and robust cross-examination, all the while under the intense scrutiny of an enthralled public through the focus of the media lens.

To Sue or Not to Sue

Depp could have turned the other cheek when slapped in the face with the damaging and defamatory allegation that he was abusive toward his wife. But many claimants feel they have no option but to vindicate their reputation from highly offensive, highly publicized and hotly denied accusations, by way of a court verdict.

That a claimant would sue at all is, therefore, understandable, but why in the U.K.? Depp was entitled to bring proceedings in the courts of England and Wales because the defendants, The Sun and NGN, are based there, and Depp has a worldwide reputation to protect there. Moreover, London might have appeared to be an attractive jurisdiction for a claimant. Historically, celebrities flocked to London, referred to as “The Libel Capital of the World” to seek worldwide reputation remedy with the imprimatur of an English jury verdict.

But for Depp, the gilt had somewhat already rubbed off this otherwise golden ticket to brand protection. Traditionally, defamation cases in the English courts were tried with a judge and a jury, the former deciding questions of law, the latter questions of fact. But now, unless the case deals with issues that are considerably complex or involve voluminous documents, cases are tried by judge alone without a jury. Thus, a star of the silver screen might once have been able to count on a certain amount of “celebrity effect” with a star-struck jury, but today they are invariably met with the steely gaze and cool judgment of a professional judge.

Doubling Down With Defamation

Defamation proceedings anywhere are a risky game of reputation roulette; and in London, Depp gambled and lost. When the judge found “substantially true” the allegation that he had been violent toward his former wife, it left The Sun newspaper able to label him a "wife beater" with impunity. And it left his reputation in ruins.

Suffering a major reputational loss such as this for a star with worldwide renown, or indeed for anyone with a reputation to protect, from head of state, to head of business, to head of a family, leaves the unsuccessful individual with a dilemma: slink away to lick their wounds or double down and come out fighting. Accusing Hollywood of boycotting him and asserting he is a victim of “cancel culture,” Depp did the latter. In the swashbuckling style of which Jack Sparrow would be proud, Depp crossed the Atlantic to Virginia to seek his reputation fortune there.

According to Albert Einstein, insanity is doing the same thing over and over again and expecting a different result. Is life imitating art for the Mad Hatter actor? Will he obtain a different result, or will his reputation be damned twice over?

The two legal actions have similar accusations of assault at their heart, but the court in Virginia is, effectively, hearing a claim that is part rerun, part sequel and part remake. It is a rerun of sorts, in that the plotlines have largely been run out before in England. The Virginia case is somewhat of a sequel, where characters from the original reappear, Depp and Heard most notably, but where new characters take to the stage. And the American case will be a remake of the English case if the ending is different, with Depp emerging victorious.

A Tale of Two Defamation actions

If the role of the media is, in the immortal words of Lord John Reith, the 1920s director-general of the BBC, to educate, entertain and inform, then with both actions the public may to a certain extent be educated about the law, they are certainly being informed as to the couple's relationship, and, undoubtedly, vast swaths of the population on both sides of the pond are being entertained by this very public, private life fallout.

The Divorce Case That Never Was

There is no doubt that living a married life under the public gaze through constant media attention adds a dimension that most of us cannot entirely comprehend, putting under additional pressure the private life of even the most extroverted individual. But, ironically, having a marital breakdown and its alleged causes dissected in court, pored over by the public and commented upon in the media, may be one of the reasons that the former couple could not avoid legal action as readily as others. Their very public, and diametrically opposed, positions meant that they had nowhere to go, no golden bridge over which, rationally and respectfully, to retreat.

It is possible for parties quietly to extricate themselves from legal proceedings before “curtain up” on the trial. Dispute resolution is an option—that does not necessarily have to be with a fully fledged trial, but through negotiation and compromise. But for this high-profile couple, with their positions so firmly and publicly entrenched, when the trial bell rang, they would have felt they had no alternative but to come out fighting. The result is that whatever acrimony was stored up, whatever allegations could or would have come out in a contested divorce case, has instead rushed into the defamation courtrooms like a burst dam.

Despite whatever evidence we hear in the courtroom, none of us will know what actually happened in the marital bedroom. At its heart, this appears to be a relationship gone wrong inside the goldfish bowl of celebrity. If this was a movie, we might be hoping the couple would meet in the wings of the court and, in hushed voices, both or either admit that they both made mistakes, to hug a little, cry a little, agree to differ and to move on each to a better and brighter future.

When watching “the show,” many of us will think that Gwyneth Paltrow and Chris Martin got it right with their amicable, quiet and respectful conscious uncoupling. But being locked in litigation, in a divorce or libel proceedings, played out for the world to see, is hardly likely to bring about the happy ending that Depp or Heard presumably want to achieve.

With these two libel actions, the original and the sequel will have led to audiences in England and America, and around the world, hearing similar accusations and wondering who is telling the truth.

Who will win? The truth is, neither party can win and both parties will lose. If Depp wins in Virginia, Heard loses credibility in the U.S., despite having won it in the U.K., while Depp would emerge with his reputation cleared in one jurisdiction but hung still with the cloud of his defeat in another. A win for Heard in the U.S. would damn Depp in both courts while adding to Heard’s bank of integrity, but at what price after weeks of heated arguments and fiery accusations, with some perhaps still believing that there is no smoke without fire?

The couple's relationship is well and truly over, but the onslaught of their reputations continues. It’s doubtful that either plaintiff or defendant will exit this second round of litigation with their reputations intact. Whether we the public are winners either, in watching this rather unedifying spectacle, is a question that we should, perhaps, ask ourselves.