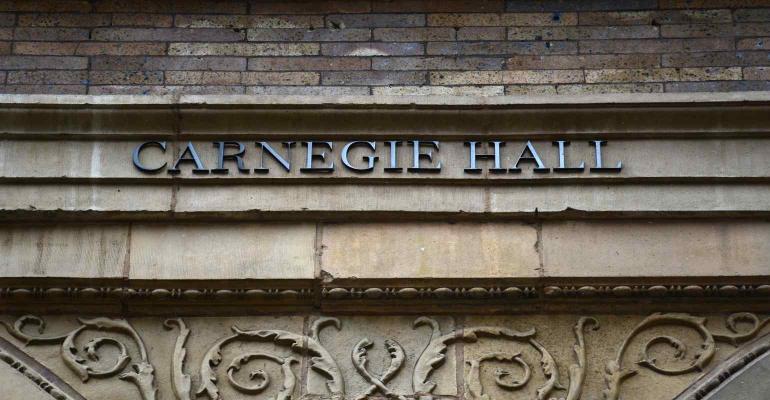 Of course, that wasn’t how Andrew Carnegie got there. Philanthropy was his ticket; he paid for Carnegie Hall’s construction and for much of its upkeep until his death in 1919, and because his name is on the building, he’ll be remembered long after most of the musicians who have played there are forgotten. Others have had their names emblazoned on Carnegie Hall as well; more recently Sanford Weill and the Weill Family Foundation topped the $100 million mark for combined contributions to Carnegie Hall. As a result of that massive gift, much of which came from the Weill Family Foundation, there’s now a Joan and Sanford I. Weill Recital Hall, the Weill Music Institute, the Weill Terrace and the Weill Terrace Room.

How could Sanford use his private foundation (PF) for this purpose? The first rule of PF operation that most donors and PF managers learn is: “Thou shalt not personally profit from your relationship with the PF.” Because of the strict self-dealing rules of Internal Revenue Code Section 4941, almost any financial benefit to a donor or insider from a PF’s activities, whether that benefit is direct or indirect, is forbidden. So how is it that the Weill Family Foundation apparently benefited Sanford very significantly—cementing his legacy for many years to come—by making grants to Carnegie Hall in exchange for these naming rights? And why do it through a PF at all, rather than from Sanford’s own resources?

While it’s certainly true that PFs generally aren’t allowed to provide benefits to donors, the tax rules generally treat public recognition, including naming rights, as a benefit that’s “merely incidental” to the charitable purposes served by the grant. This seems counterintuitive. Staples paid almost $120 million in 1999 to have its name on the Los Angeles arena now known as the Staples Center for a 20-year period. Surely, naming rights have real monetary value, and having a PF pay for those naming rights to benefit an individual or corporation affiliated with the PF certainly seems like a self-dealing transaction. However, perhaps out of recognition of the importance of facilitating naming gifts for public charities that generate a lot of revenue this way, Internal Revenue Service rulings have generally blessed the use of PFs to make grants in exchange for naming rights.

This doesn’t mean that there’s no risk, and much may depend on how the distribution is framed. The rulings blessing this sort of arrangement involve transactions framed as charitable grants, with naming rights as incidental aspects of a fundamentally charitable transaction, rather than as commercial-like contracts. One could construct a “Staples-like” naming rights contract with a grantee that might indeed be treated as providing a more than incidental benefit if framed more like a commercial contract. Or a tax could be triggered if a grant (whether connected with naming rights or otherwise), is made from a PF in satisfaction of an insider’s legally binding pledge or if there’s some other sort of financial benefit beyond name recognition. However, if done correctly, using a PF to secure naming rights has a long-accepted track record of success and shouldn’t present tax risks.

Furthermore, using a PF to make such a gift may have some benefits when compared with making gifts individually. Many donors use their PFs for this purpose in part to help ensure that there’s a party to the contract that will endure beyond the donor’s death. In general, the law regarding who has standing to enforce a naming rights agreement is very unclear and can differ based on the facts of a particular situation and the laws of the various states. However, the law is generally consistent in denying heirs the right to enforce naming rights agreements entered into by individuals. A PF, however, can endure indefinitely, ensuring that there’s a party in existence to monitor the grantee’s compliance with the agreement and to try to enforce it if necessary. In addition, it’s much easier to negotiate for return of funds in the event of breach of a naming agreement when the donor is a PF rather than an individual.

There may also be tax benefits to using a PF. Although in some situations the donor may be better off from a tax perspective making some or all of the gift directly, the preferred method from a tax perspective depends on a host of factors, including the identity of the donee, the donor’s adjusted gross income, the assets used to make the gift, the timing of gift installments and the donor’s other charitable gifts. For example, if the charity isn’t a U.S. charity, the donor will almost certainly be better off using a PF, as an individual can’t get a tax deduction for a gift to a non-U.S. charity. For tax and other reasons, many donors find a PF to be a much stronger base from which to make naming gifts.

Naming Through a PF

Let’s say your client is a donor who has a PF. Once your client decides how to make the gift, he or she will need to negotiate an agreement with the chosen charity to secure the desired naming rights. Many charities have policies that will set out the level of naming rights that can be obtained for a grant of a particular size. In a capital campaign, for instance, an organization will often provide a “price list” that can tell a prospective donor that naming a building will cost, say, several million, while naming a single room may cost a few thousand dollars. Further, an institution may have different policies and guidelines depending on what will be named—physical spaces, programs, faculty positions, endowments, scholarship funds and so forth. For major gifts, of course, almost everything is negotiable.

The substance of the negotiation will include many or all of the following elements, which ultimately should be included in a written gift agreement between the PF and the charity:

A naming rights agreement isn’t, by its nature, a commercial contract. A certain amount of trust and faith goes into a charitable grant, including one involving naming rights, and many donors are comfortable providing more flexibility to the institutions that they love and generally making the process as seamless as possible. However, naming rights arrangements inevitably involve a lot of money, and circumstances may change. Accordingly, it’s appropriate for a donor to want to ensure that the terms of the donation or grant are clear and to seek to impose some reasonable restrictions and accountability on such a transformative gift. When all parties to a naming agreement respect the needs and imperatives of the other, with appreciation for both the donor and the mission of the charity, naming rights agreements can align both sets of goals, providing much needed resources to the charity and cementing the donor’s philanthropic legacy for many years to come.

Jeffrey Haskell, J.D., LL.M. is chief legal officer and Jennifer E. Bruckman is deputy legal officer for Foundation Source, which provides comprehensive support services for private foundations. The firm works in partnership with financial and legal advisors as well as directly with individuals and families.