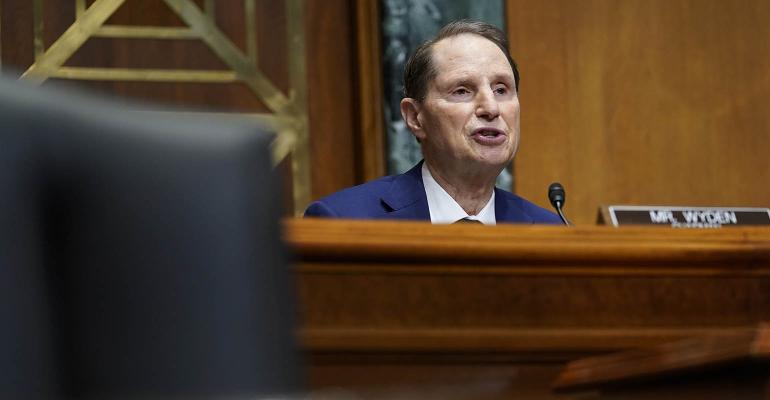 A push to expand eligibility, simplify calculations and include a phaseout for the pass-through deduction.

U.S. Senate Finance Committee Chair Ron Wyden (D-Ore.) recently introduced a bill, known as the Small Business Tax Fairness Act, which takes aim at the 2017 Tax Cuts and Jobs Act’s (TCJA’s) 20% deduction for certain income from pass-through businesses, like sole proprietorships, S corporations and partnerships. Originally marketed as a “Main Street” business tax cut, the deduction is meant to lower the marginal income tax rate on qualifying pass-through business income. But, complicated calculations, carveouts and limitations often end up excluding the smallest businesses that might need it the most.

In fact, according to the Joint Committee on Taxation, the top 1% of households will receive about 61% of the monetary benefit of the pass-through deduction in 2024, while the lowest two-thirds of households will receive only 4% of the benefit. This discrepancy happens because wealthy households often receive a much larger percentage of their income from pass-through entities when compared with middle-class households. Because the wealthy are in the top income brackets, they can receive larger tax breaks per dollar of income deducted.

Wealthy small-business owners also have a significant opportunity to take advantage of the system because often, similar income is treated differently under the current policy. By restructuring their income, they can see significant tax savings. For example, two individuals who receive the same income and do the same work could be either an employee of a company or a partner in a partnership. The partner’s income would be considered business profits that could qualify for the pass-through deduction. The partner’s total top rate could be 33.4%, which is the top rate of 37% reduced by the 20% deduction but increased by the 3.8% Medicare tax on high-income households. There’s also the opportunity for the partner to avoid the Medicare tax and be subject to only a 29.6% tax. The employee, on the other hand, would be stuck with a top tax rate of 40.8%, which is the top rate of 37% percent plus the 3.8% Medicare tax.

To combat this disproportionate benefit, the bill makes three big changes. It: (1) simplifies the calculations needed to determine the deduction, (2) expands eligibility for middle income business owners, and (3) phases out the deduction for individuals earning more than $400,000. Chair Wyden calls his bill a “win-win” for middle-class business owners because it makes the policy less complicated and more applicable to real “Main Street” businesses. At the same time, it has the potential to raise significant funds for community investments like education, child care and health care.

The current policy makes it difficult to understand which industries qualify for the deduction and which don’t. It also includes complex caps and thresholds, which make calculating the deduction particularly cumbersome. Proponents of the bill argue that it takes a team of sophisticated lawyers and accountants to wade through the existing policy’s many formulas and limitations based on paid W-2 wages and qualified investments. The bill proposes one threshold for deciding whether the taxpayer can receive the deduction. There’s also one simplified definition of “qualified business” income that applies to all taxpayers. If the bill passes, small business owners will have a much better chance of understanding how to take advantage of the deduction.

Studies show that through 2025, the 20% deduction will cost about $50 billion a year. Phasing out the deduction for taxpayers with more than $400,000 in income is another way to create a significant impact, and Chair Wyden wasn’t the only one thinking about it. The phase out was also included in President Biden’s corporate tax proposals. Because the majority of taxpayers taking the deduction are wealthy, the Tax Policy Center estimated that the phaseout would raise about $143 billion over 10 years.

This fact, combined with the fact that a high-earning individual taxed at 37% could see a 4.7% rate reduction on their pass-through business income further demonstrates the imbalance. While the 20% deduction along with other parts of the TCJA are scheduled to expire after 2025, supporters of the TCJA have indicated their intention to push for its extension. Given the potential impact on high-net-worth individuals, the bill is certainly one worth tracking.