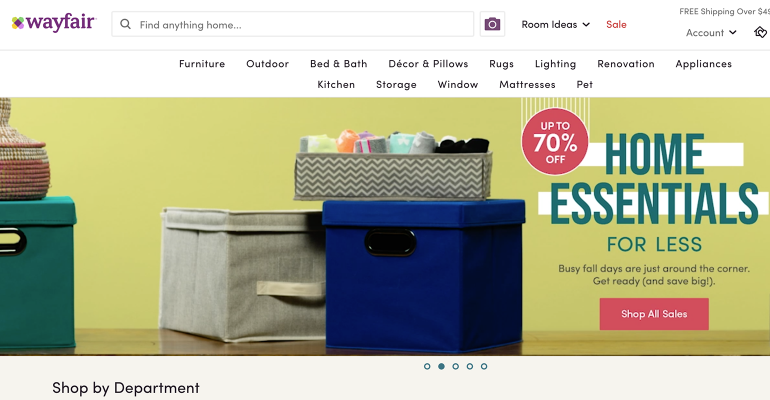 Is the Wayfair decision way fair or way unfair?

The days of dodging sales tax by shopping online came to an end in America, with a few minor exceptions, recently when the U.S. Supreme Court issued its 5-4 decision in South Dakota v. Wayfair Inc.

Twenty years ago, such a change in e-commerce tax rules would have sent shockwaves across the still-nascent internet. Yet the June 2018 ruling was met by almost as many yawns as screams, largely because many companies have been anticipating and preparing for the change for years.

Nevertheless, as the new internet sales tax collection and reporting rules take effect over the next year or two, state governments, consumers and smaller businesses without in-house tax compliance teams will feel some impact. To understand what the change really means, it’s helpful to take a look back at the history behind the decision.

Although the World Wide Web was officially launched in 1991, it would be hard to find enough people who shopped online that year to fill a college basketball arena. Most people didn’t even know what the internet was. Still, states recognized immediately that the looming reality of e-commerce posed a major threat to their tax revenues, especially since several early online merchants touted sales tax avoidance as a major benefit of online shopping. By 1992, the Supreme Court had already been called on to rule on internet sales tax rules in Quill Corporation v. North Dakota.

In that case, the Court ruled that a company only had to collect sales tax (and file appropriate sales tax returns) for transactions within a particular state if it had a physical presence there—a brick-and-mortar store or an office building, for example. The majority opinion spoke of a nexus between collection of taxes and provision of services. In other words, if a company doesn’t operate a facility or dispatch employees to a state, then it’s not benefiting from the infrastructure and other state services that sales taxes fund, so it shouldn’t be burdened with the responsibility of collecting those taxes.

What the South Dakota v. Wayfair Ruling Changed, and Why

If the Quill ruling initially seems fair and reasonable, consider this problem: Suppose Company A primarily conducts business online but rents a small office in Nebraska for two months a year. The office is staffed by a traveling representative (ironically, a wayfarer on behalf of the business) to service seasonal needs of clients. Sales at the office total a few hundred thousand dollars per year, while the company has an additional $1 million annually in revenues from online sales to Nebraska customers.

Meanwhile, Company B does over $10 million in online sales in Nebraska, all requiring delivery of items via Nebraska highways, but none of its more than 20,000 employees ever set foot in the state. Under Quill, Company A would have been required to collect and report sales tax on all of its Nebraska sales, including online sales, while Company B would have no sales tax obligations in Nebraska whatsoever. It’s easy to see why a number of companies viewed the rules established in 1992 as “way unfair.”

When Wayfair takes effect, almost all companies that conduct business online will need to comply with the sales tax collection and reporting laws of every state where they transact internet sales. There are a few exceptions, mostly for businesses with very few customers or very low revenues within a particular state, but for the most part, everyone is now playing by the same rules. So that must be “way fair,” right? Not necessarily, at least in the opinion of a number of smaller online retailers.

Why Is Sales Tax Compliance Difficult for Small Businesses?

Many large e-tailers received the Wayfair ruling with a shrug. Their tax compliance departments had already hedged their bets by putting in place the tracking infrastructure necessary for compliance long before the case reached the highest court. In fact, a number of major online sellers started collecting sales tax on most or all taxable sales several years ago, regardless of whether they were legally required to do so.

For a small business, however, sales tax compliance poses a real challenge. Sales tax is assessed at the state, county and municipal levels, at varying percentages and with exemptions such as food and/or clothing purchases that differ from one state to the next. Not surprisingly, most of the cries that Wayfair is unfair have come from small online vendors worried about the time and costs associated with collecting and reporting sales taxes. Time has a funny way of balancing things out, however. The same advancements in computing power and speed that fueled the explosive growth of e-commerce will also make tracking transactions and assessing appropriate sales taxes far more feasible than anyone could have dreamed in the days of Quill.

How Will the Supreme Court Sales Tax Ruling Affect States and Consumers?

On paper at least, state, county and local governments will be the clear winners as the new internet sales tax rules take effect. If the estimates put forth by those who argued the Supreme Court case are anywhere near accurate, the increased tax revenues these governments have coming their way could total well into the billions of dollars each year.

As for consumers, there is good reason to believe that most of them will never give much thought to the fairness or unfairness of Wayfair at all. E-tailers who began collecting sales tax in every state in advance of the ruling have not seen any resulting decrease in sales. In the early 1990s, shoppers might have purchased online to save a few bucks in taxes, but these days, people shop online for convenience above all else.

As with any change in the interpretation of a law, there will never be universal agreement on whether the Supreme Court’s 2018 internet sales tax ruling was “way fair” or “way unfair.” If small businesses can weather the change successfully, the ruling will likely be largely forgotten in just a few years from now. Given how bitterly businesses and states have fought over taxing internet sales during the 26 years since Quill, that reality may be the most surprising outcome of all.