/sites/all/themes/penton_subtheme_wealthmanagement/images/logos/footer.png
Recent
Recent
Hilton CEO Thanks Fed, Says Hotel Rates Can Rise with Inflation
Oct 28, 2021
Mindy Diamond on Independence: Stifel’s $400B Success Story
Oct 28, 2021
Picking Winners Is a Losing Game – Lessons Learned From Moneyball
Oct 28, 2021
How to Implement Best Practices After a Conference
Oct 28, 2021
Featured
The 10 Best and 10 Worst States in Which to Retire in 2021
Jul 15, 2021
Poll: 15 Classic Books on Investing and the Markets
Apr 03, 2020
25 U.S. Markets Adding the Most Multifamily Units This Year
Feb 03, 2021
Fifteen Must-Listen Business Podcasts for Advisors
Aug 14, 2020 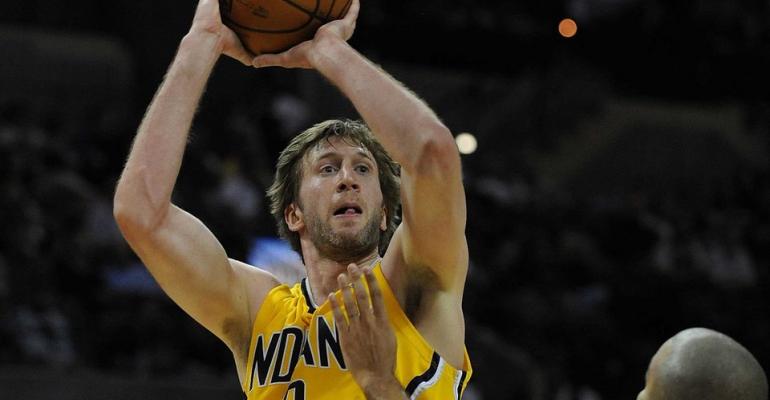 The former NBA star turned RIA is launching his own firm.

After a successful 12-year career in the NBA with the Golden State Warriors, Los Angeles Lakers and Dallas Mavericks, Troy Murphy is now looking to take on the issue of sudden wealth management, and show clients how not to lose it all.

Thursday morning, Murphy, now a registered investment advisor, announced the launch of his own firm, Sweven Wealth Advisors, that will focus specifically on sudden wealth recipients and donate 100 percent of its profits to non-profits focused on financial literacy.

“I always had [the idea] in the back of my mind.” Murphy explains. “I worked for a year at the NBA in the basketball operations department, and as I traveled around to work with different teams and players and thought back to my own experiences, I got more and more motivated to do it. I feel there’s a void there I can help fill.”

“I left Notre Dame at 20 to go play in the NBA, and I was thrust into a situation that I simply wasn’t prepared to be in. I really didn’t know what to do or who to trust, and it was a circuitous process of finding the right advice—and I got a lot of bad advice along the way. What I’m trying to do is go people in a similar circumstance a more direct route to figuring this thing out.”

Murphy, who went on to Columbia University after retiring from the NBA to receive his degree in sociology before becoming an RIA, is quick to point out that Sweven Wealth will focus on not only helping athletes manage their money, but all types of sudden wealth recipients, such as inheritance recipients, divorcees and entertainers.

According to Murphy, the common factor that unites these divergent groups is the unexpectedness of their windfalls. Be it through a large contract or sudden inheritance, they simply haven’t been in that situation before and they don’t know what’s coming. That’s where he thinks he can help. “I’ve been through this process.” He explains. “I know what’s coming. I’ve acclimated to a new financial situation, I’ve been able to manage expectations of family and friends, put together a plan and now monitor that plan.”

As far as the charitable element, Murphy says “The most difficult aspect of putting this together was finding organizations that fit with the values that I was trying to implement in the firm.” He continues, “It all goes back to me as a 20-year old. I went to some fantastic schools, I went to a fantastic high school, a top college and I learned so many things there, but all those subjects combined didn’t prepare me for the new personal finance situation I found myself in. [Managing your finances] is a necessary skill, but one that many people don’t have.”

And it’s that sentiment that produced the firm’s unusual name. “Sweven is an old English word that means vision or dream,” says Murphy, “so I was thinking of what I would have wanted available to me as a 20-year old coming into the windfall I was coming into.”