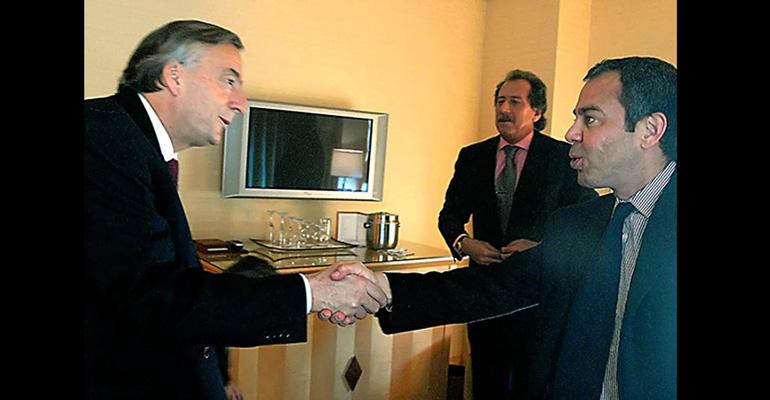 A peek inside the investments and finances of the "friendly vulture," David Martinez

By Pablo Gonzalez and Blake Schmidt

(Bloomberg) --As Wall Street billionaires go, David Martinez might not be the richest, but he is one of the most mysterious.

In Mexico, where he was born and raised, and in Italy, where his  Fintech Advisory Inc. earlier this year bought a stake in the world’s oldest bank, he’s known as a “ghost investor.” He’s very active but frustratingly opaque. His hedge fund, with an office on Manhattan’s Park Avenue, doesn’t have a website.

“He’s a black box,” said Jose Maria Cao, an analyst for TPCG Capital SA in Buenos Aires, where Martinez got the okay from the government in March to acquire a controlling stake in Argentina’s biggest telecommunications company.

The would-be priest-turned-distressed-debt-man has bought into just about every basket case over the past 30 years, from Greece to Pakistan, and has invested heavily in Argentina, where they call him the “friendly vulture,” an affable take on the scavenger-bird invoked by former President Nestor Kirchner to describe those looking to profit off the country’s financial woes.

Now Martinez’s Argentine bet has pulled back the curtain a bit. Investors in utilities there must disclose ownership particulars, and the filing for Telecom Argentina SA revealed he’s the sole shareholder in Fintech, which controls the telecommunications giant through Fintech Telecom LLC. By that measure, his net worth is valued by the Bloomberg Billionaires Index at $2.4 billion.

This would make Martinez, 59, among the wealthiest people in Mexico, though he holds dual Mexican-British citizenship and seems to spend much of his time in New York, visiting his native Monterrey only to see family.

In keeping with his dislike of publicity, Martinez declined to comment. He rarely gives interviews. Acquaintances of his who agreed to talk on condition they not be identified described him as loathe to discuss his personal life -- and had little else to say about him.

“He is an obscure investor, and nobody knows whose money he’s been handling,” said Julio Barbaro, who headed the agency that regulated media companies under the administration of Cristina Fernandez de Kirchner and that of Nestor, her late husband, who preceded her as president.

Over the years there have been glimpses. In 2003, Martinez made headlines when he spent a then-record $42.3 million for a condo in Manhattan’s Time Warner Center (he later added to the unit, to occupy both the 76th and 77th floors). In 2006, he purchased a Jackson Pollock drip painting from David Geffen for about $140 million, according to experts quoted in a New York Times article that set the art world on fire.

Martinez was again thrust into the spotlight in 2012, when he crossed swords with hedge-fund billionaire Paul Singer during the contentious debt-restructuring orchestrated by Mexican glassmaker Vitro SAB. The two had been on opposite ends of a spat before: Singer was in the camp that demanded full repayment of Argentina’s defaulted debt while Martinez took the other side.

Raised in Monterrey in northern Mexico, Martinez joined Regnum Christi, a group affiliated with the Legionaries of Christ, a scandal-plagued Roman Catholic order that once counted Carlos Slim, Mexico’s richest person, among its benefactors. Martinez explored becoming a priest during a sixth-month stint in Rome, studying philosophy at Pontifical Gregorian University.

But he chose Wall Street, earning an engineering degree at Tecnologico de Monterrey before heading to Harvard University for an MBA. He went to work for Citigroup Inc. on the emerging markets desk in New York and later founded Fintech, using a $300,000 loan from his family that he promptly paid back with interest. He wrote in a 2013 Financial Times column that his firm participated in almost every sovereign debt restructuring of the past quarter century, from Latin America in the 80s to Greece four years ago.

The bulk of his investments appear to be in Argentina. He bought sovereign debt there more than a decade ago and made millions repurchasing discounted bonds. Fintech in 2007 became a 40-percent owner of Cablevision SA, whose parent Grupo Clarin SA is the country’s most powerful media group.

Barbaro, the former regulator, said Martinez really knows how to work politicians. The media-industry oversight agency had opposed Cablevision’s acquisition of TV and internet provider Multicanal, on grounds it would give Cablevision a too-hefty market share. But then-President Fernandez signed off on the deal after meeting with Martinez. One of the few photos to be found on the web of Martinez is from that event: he and Fernandez shaking hands, flanked by billionaire banker Jorge Brito, who’s an investor with Martinez in the energy company Genneia SA.

The question now is whether President Mauricio Macri’s regulatory reforms have opened the way for Martinez to pull off the biggest deal in the Argentine telecom industry. Martinez and Macri met during the presidential election and again after Macri’s inauguration.

Soon after, Fintech had the green light for the Telecom Argentina acquisition that had been blocked under Fernandez. Then Grupo Clarin shareholders approved a spinoff of Cablevision that could pave the way for a merger, putting the billionaire in a position to cash out on two of his biggest holdings. Argentina’s friendly vulture appears to have made more friends in high places.

Life Insurance Triage in the Age of Coronavirus
Apr 03, 2020