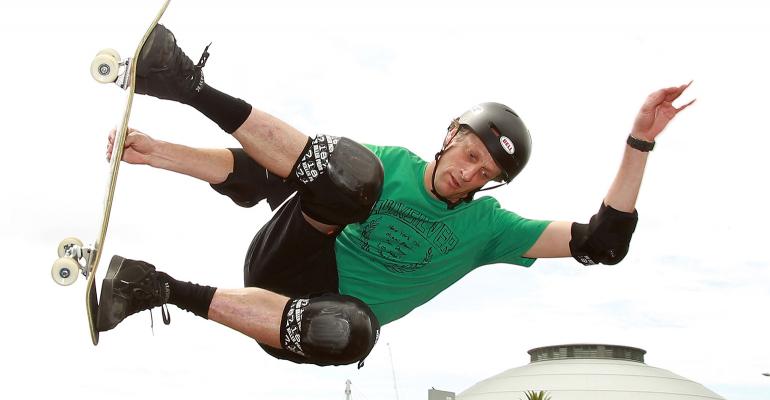 My Life as a Client: Tony Hawk

The skateboarding legend opens up about his experiences with advisors throughout his long career.

At just 14, Tony Hawk defied the odds by becoming the first pro skateboarder. He’s been a thriving entrepreneur ever since. He founded Birdhouse Skateboards and Hawk Clothing, not to mention the success of his signature video game, Tony Hawk’s Pro Skater. Additionally, the Tony Hawk Foundation has given away more than $5.8 million to 588 skate park projects. Along the way, he’s accrued a team of trusted financial professionals, but it hasn’t always been smooth skating. Wealthmanagement.com recently caught up with Tony after he delivered a keynote address (in cooperation with Chase Ink) at the AICPA Engage Conference in Las Vegas for a chat about his money journey and experiences with advisors.

Wealthmanagement.com: When did you first decide you needed a professional advisor?

Tony Hawk: When I first turned pro, in the early 90s, my dad mostly helped me out early on. We definitely made some mistakes dealing with declining revenues and such, but it wasn’t until skating sort of had a boom in the late 90s that I really sought professional guidance—largely because of tax questions. My income was mostly endorsements—so 1099—and I didn’t really know what that meant, so I was pretty shocked when one day I got this huge tax bill.

It was a pretty rough lesson, because I don’t speak the language of accountants at all, and they would try to explain to me what this means and how risk averse something was, etc. It was all so foreign to me and I quickly realized that all people managing money aren’t the same, and I found people I was more in tune with to manage my money, because I found that the first group I hired was more antiquated in their approach.

WM: How did you find that first advisor?

TH: It was a friend of a friend’s recommendation, but that friend was much older, so their path was a lot different than mine was. They were more trying to manage their wealth and live off their life savings instead of just being at the beginning of setting things up.

WM: When did you realize things weren’t working out?

TH: From the get-go, I thought that our meeting was really boring [laughs]. And in some ways, I thought, “well, maybe that’s just how it is.” But at the second meeting, I realized we were running over a lot of the same old ground and not trying anything new or pushing forward with ideas, and it was more like he was stuck in this time capsule of how he did things and there was no new way of approaching it. So, I started to look for other people willing to do that and found a group that I was very comfortable with.

WM: How did you find them? Recommendation? Advisor shopping? What was different?

TH: A little bit of both. They were a group that was more in tune with younger high-net-worth people and willing to be a little more risky with their investments. The first meeting was a little bit better than with the other guy. I won’t say it was the most exciting thing ever. But they also didn’t speak down to me, and that was key. They weren’t talking to me like I was an idiot, and I felt like there was a bit of that with the other guy in that he was a bit of a know-it-all, and I didn’t have his background, so I should just listen to everything he says and automatically heed his advice. (At this point in time, Tony was in his late 20s with two kids.)

WM: Were your kids a major contributing factor in seeking advisors?

TH: Absolutely, and mostly to set up a living trust because you don’t normally think of that stuff in your 20s, you know, a will and estate planning. I think it’s hugely important, especially if you have any substantial financial success or savings that you don’t want it left to arbitration or just to the court’s decision. You want to already be structured and provide for your family as best you can. I learned a lot in those days in terms of, if you’re incapacitated, not giving all of the money at once to your kids once they reach a certain age and instead dividing it up based on certain markers or successes in their lives, so they can be functioning members of society and productive and not just lottery winners.

WM: How aware of your wealth are your kids?

TH: That’s a good question. I think they know we live comfortably and that we’re not excessive, and I have actually told them that they don’t have to worry, necessarily about their big financial futures because there will be money allocated to them. (Tony now has four children aged 9 to 25.)

For instance, my son—he’s 25—and I had put away money for college for him, but he followed a similar career path to mine, turning pro as a skater at an early age and was making a living doing that, so when it came time for him to buy a house, I had this “college fund,” and he was obviously not going to college at that point, so he used that money for a down payment on his first house, which I was comfortable with. I feel it was put to good use. In cases like that they understand that I’m providing for them, but only in cases of their true living expenses, not just money to blow on cars and whatnot.

WM: Do your kids know your advisors?