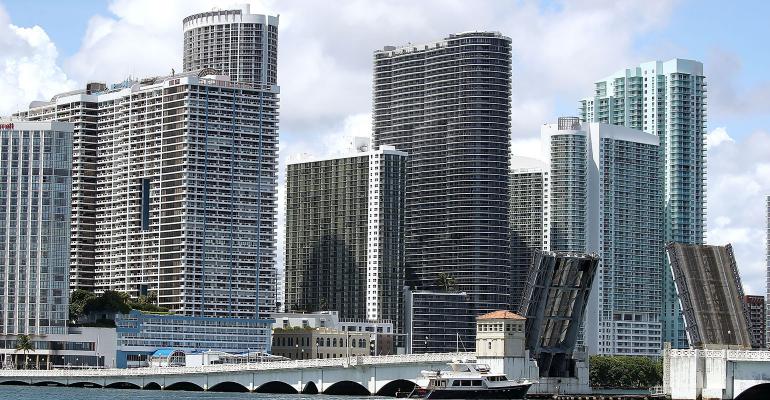 ‘You’ve secured everything and now you can only pray’

By Michael Smith and Katya Kazakina

(Bloomberg) --Beyond the bar and the palm-fringed pool, past the gold-leafed columns and floor-to-ceiling murals, workers at the grand Faena Hotel Miami Beach prepared for Hurricane Irma’s fury.

Their unusual assignment: fortify the four layers of bullet-proof glass encasing a gilded, 24-karat mammoth skeleton sculpture that cost a cool $17 million. Like the fantasy-world Faena, the life-size Damien Hirst work, now sheathed in a protective cocoon of materials including steel pylons, is a monument to the wealth that enveloped Miami as it grew into what someone once dubbed New York’s sixth borough.

As thousands streamed northward along Interstate 95 Thursday to escape Irma, the city was confronting a reckoning after an era of rapid development that transformed it into an international center of business and culture. The massive flow of money that first began to pour in during the 1990s, the Madonna era of South Beach, came with a dearth of proper drainage and storm-hardened power grids, roads and bridges.

Since 2011, more than 400 luxury condo towers have gone up across an area perched precariously between beach and swamp. Next to the hotel on the water, Faena House has lured financiers including Lloyd Blankfein of Goldman Sachs Group Inc. and Kenneth Griffin of Citadel LLC into plowing tens of millions of dollars into trophy condominiums.

Now comes Irma, the mightiest storm to hit the area since Andrew in 1992, which left dozens dead in the state and caused it $23.5 billion of damage. Irma’s human and economic toll in Florida is as yet incalculable. But damage estimates run as high as $130 billion.

The last major hurricane to strike the region was Wilma in 2005, and the Miami area’s population has grown 10 percent since 2010, so many residents are unfamiliar with the often convulsive weather. Under brilliant sunny skies Thursday, people across the region filled sandbags, mobbed service stations until they ran out of gas and boarded up homes.

“We are denser, and a lot of people have never been through a hurricane, which poses complications,” said Miami Chief Resilience Officer Jane Gilbert, who’s tasked with adapting the city to a future of mega storms and rising sea levels wrought by climate change. “Yet we’ve had such a renaissance. It’s just an exciting place to live.”

Miami has gone through a whiplash of evolution, from the Rat Pack at the Fontainebleau and waves of New York retirees in the 1960s to the Cocaine Cowboys and flood of Cuban refugees during the 1980 Mariel Boatlift. Then there was the avalanche of money from an unprecedented economic boom in Latin America during the 2000s that drove an explosion in apartment towers and mansions with Maseratis parked out front.

“It has long been an ever-changing city,” said Paul George, a Miami Dade College professor who’s written 15 books about local history. “But the changes over the last 10 years have been just earth shaking.”

The latest makeover has been driven largely by art and culture. Art Basel Miami Beach, which draws collectors from New York to Beijing, arrived in 2002, along with celebrity chefs such as Jean-Georges Vongerichten.

The biggest contemporary art event in America, with about $3 billion of art on display by a slew of international galleries, it attracted 77,000 people last year. Attendees have included hedge-fund managers Dan Loeb and James Chanos and casino magnate Steve Wynn. Rich newbies flock there, too, lured by rooftop parties, tours of trend-setting private collections and a dozen satellite fairs.

Some of the biggest market-makers in contemporary art have set up private foundations in Miami’s Wynwood district, which the late New York native Tony Goldman created from a wasteland of abandoned warehouses. Martin Margulies’ 45,000-square foot collection at the Warehouse is known for its ambitious sculptures and sprawling installations. New York’s Mana Contemporary, an urban arts organization founded by Israeli billionaire Moishe Mana, opened a 30-acre campus last year where artists work and live.

“It’s not just a place to party anymore,” said Dennis Scholl, president and chief executive officer of ArtCenter/South Florida. “Miami is now being talked about in the same breath as Singapore. We are seeing external validation.”

Len Blavatnik, the billionaire owner of Warner Music Group and a partner in the Faena project, said Miami has grown up. “It’s much more cultured than in the past,” he said. “Why do people go to the South of France? It’s the same. Sun, fun, good food and a little bit of culture.”

Now it’s faced with bearing the brunt of Irma, a storm the size of France. At Miami Beach’s Bass Museum, which was scheduled to reopen next month following a $12 million renovation, workers removed the Sylvie Fleury “Eternity Now” neon installation from the facade. Across Biscayne Bay, at the Perez Museum, sand bags and plastic blocked the entrance and workers planned how to fortify a collection of outdoor sculptures.

Two miles north in Miami Design District, sculptures by artists Kenny Scharf and Xavier Veilhan have been taken indoors, said Craig Robins, a real estate developer who’s been the driving force behind the neighborhood’s recent transformation into a $2.2 billion oasis of luxury.

“It’s always scary and dangerous. You can’t take any chances,” said Robins, whose company Dacra Development Corp. is one of three investors in developing the district. “At this point there isn’t much you can do. You’ve secured everything and now you can only pray. You pray it goes out to sea or gets weaker.”