/sites/all/themes/penton_subtheme_wealthmanagement/images/logos/footer.png
Recent
Recent
Time for Growth: How and when you can reinvest in your business to take your firm to the next level
Oct 15, 2021
Everything You Always Wanted to Know About Social Media* (But Were Afraid to Ask)
Oct 15, 2021
Act Analytics Team to Join Sustainalytics
Oct 15, 2021
Eight Must Reads for the CRE Industry Today (Oct. 15, 2021)
Oct 14, 2021
Featured
The 10 Best and 10 Worst States in Which to Retire in 2021
Jul 15, 2021
Poll: 15 Classic Books on Investing and the Markets
Apr 03, 2020
25 U.S. Markets Adding the Most Multifamily Units This Year
Feb 03, 2021
Fifteen Must-Listen Business Podcasts for Advisors
Aug 14, 2020
The Daily Brief
brought to you by 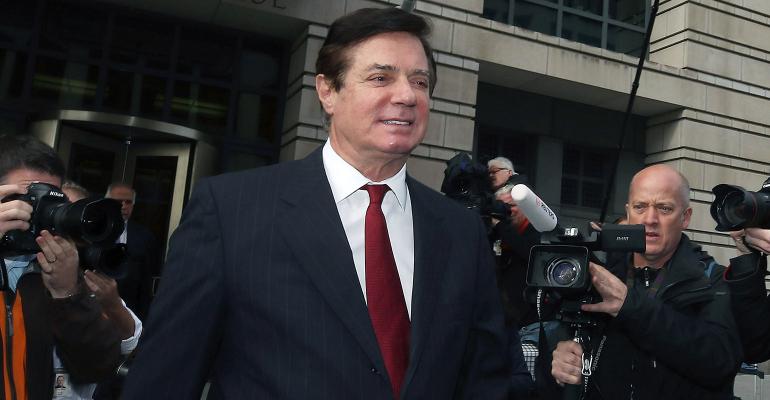 Testimony in the former Trump campaign chairman’s trial today centered about purchases Paul Manafort made at “the world’s most expensive store.”

It came out in testimony today at his trial for bank and tax fraud charges that President Trump’s former campaign chairman Paul Manafort had an expensive suit habit (not that we hadn’t already noticed). Turns out, according to a witness at the proceedings, Maximillian Katzman, 29, the manager of a luxury menswear store, Alan Couture, in New York City, Manafort spent more than $929,000 on suits between 2010 and 2014. The kicker: Manafort was the store’s only customer to pay for suits using wire transfers from foreign accounts.

Maximillian Katzman, 29, the manager of a luxury menwear store in New York City, testifies that Paul Manafort spent more than $929,000 on suits between 2010 and 2014. He was the store's only customer to pay using wire transfers from foreign accounts.

That was not the only place Manafort used this type of purchase mechanism, he also used wire transfers from foreign accounts at the House of Bijian in Beverly Hills. The luxury clothier boasts at being “the world’s most expensive store,” according to the Washington Post. Its CFO, Ronald Wall, testified that wire transfer was an unusual way for its clients to pay, but Manafort used regularly.

All this focus on Manafort’s lavish spending drew the irritation of Judge T.S. Ellis III, who questioned how it proved the government’s case that Manafort filed false tax returns. The judge also managed to inject his own brand of humor, intentional or not, at being unable to pronounce “Bijian” without some help, adding: “I can’t recognize these names … If it doesn’t say ‘Men’s Wearhouse,’ I don’t know it.”

Judge Ellis tells lawyers to stop rolling their eyes, asks what "House of Bijan" is -- "If it doesn't say 'Men's Wearhouse,' I don't know it" https://t.co/EiNurGsH7S