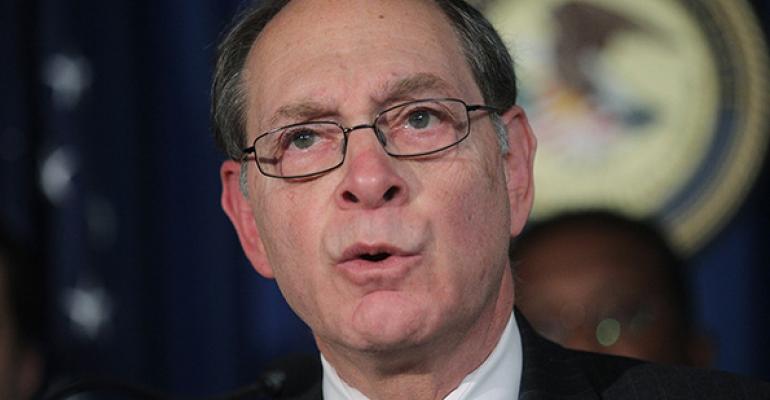 Madoff Sons' Fight Over Cash Persists Years After Their Deaths

(Bloomberg) -- The trustee unwinding Bernard Madoff’s Ponzi scheme is losing patience with the estates of the con man’s dead sons.

Mark and Andrew Madoff died without resolving a 2009 lawsuit accusing them of squandering $150 million of investors’ money and recent settlement talks with the estates have hit dead ends. Their ex-wives and other relations cut deals years ago. The brothers, who held senior roles at their father’s now-defunct securities business, had to have known about the fraud, trustee Irving Picard claims as he readies another bid to get the estates’ cash.

"Almost eight years since Madoff’s arrest, the Madoff brothers have not returned a dime from the millions of ill-gotten gains that funded their extravagant lifestyles, desperately clinging to illicit proceeds taken from the victims of the fraud," Picard told the court last month.

The claims against the Madoff clan are part of Picard’s effort to recoup cash for thousands of victims who lost $17.5 billion in principal. So far, he’s recovered $11.1 billion, or nearly 64 cents on the dollar, by suing the banks and offshore funds that funneled cash into the scam as well as investors who profited from the fraud by withdrawing more money than they deposited.

While he got money and assets from many of Madoff’s relatives, Picard is intent on making sure none benefit from the con man’s fraud by pursuing a new lawsuit. He seeks to recover tens of millions of dollars worth of property from the brothers’ estates, including a Manhattan apartment.

Madoff’s sons said they went to the authorities immediately after being told about the Ponzi scheme. Madoff was arrested Dec. 11, 2008. The brothers had led Madoff’s market-making and proprietary-trading businesses for years, overseeing real trading activity that lent legitimacy to their father’s bogus investment advisory unit. Their lawyer says they earned their money through their work and they denied knowing about the fraud until his confession.

Picard, a lawyer with Baker & Hostetler LLP in New York, never bought that.

"The Madoff brothers knew, saw and were simply too intelligent to plausibly feign ignorance about the fraud," the trustee said in court papers. "Even the market-making and proprietary trading business units they ran were fraudulently propped up” with stolen money.

On the two-year anniversary of his father’s arrest, Mark Madoff used a dog leash to hang himself from a pipe in the living room of his Manhattan apartment. His brother, Andrew, died of cancer in 2014. Mark’s ex-wife, Susan Elkin, and his widow, Stephanie Mack, were dropped from Picard’s lawsuit under confidential terms, as was Andrew’s ex-wife, Deborah West.

Other defendants settled over the years, including Bernard Madoff’s brother and former compliance officer Peter Madoff, who paid Picard $90 million after pleading guilty in a related criminal case. He’s serving a 10-year term. Peter Madoff’s daughter Shana Madoff, another compliance officer, was also dropped from the suit. Picard had accused the group of spending customer cash on credit card bills, vacations and to finance their own business ventures.

A separate suit against Madoff’s wife seeking more than $40 million has also been pending for years. Picard hasn’t rushed that case because Ruth Madoff turned over most of her assets to the government years ago. The trustee is nevertheless seeking a judgment in the full amount as part of any deal "in the event that any additional assets are ever uncovered or discovered in the future," Picard’s spokeswoman Amanda Remus said in an e-mail.

The revised complaint against the brothers will be "focused exclusively on their wrongdoing," including alleged fake trades and sham loans. Picard told the court and he’ll formally ask permission to file it in June.

Martin Flumenbaum represents the brothers’ estates. In court papers, he says they were already exonerated in a 2013 U.K. trial involving their father’s London-based subsidiary and that Picard is seeking "a second bite at the apple" by attempting to breathe new life into the U.S. case.

"The trustee had a full opportunity to litigate, in the U.K., the exact same factual allegations that he asserts here," Flumenbaum told the court last month. "The forum was fair, and he lost. He should not be permitted a do-over in this case."

The Madoff brothers, who were directors of a U.K. unit, were sued in London by the company’s British liquidator over their alleged liability related to transactions set up by their father.

The U.S. suit can go forward, Picard says, because he wasn’t part of the U.K. trial and his claims are different and far broader.

The father pleaded guilty to fraud and is serving a 150-year term. His claim that he had acted alone was challenged in a 2014 trial in New York where five of his closest employees were convicted of helping in the fraud for decades. His longtime finance chief, Frank DiPascali, pleaded guilty and testified that Mark and Andrew Madoff were complicit in the fraud, though they weren’t among the defendants. DiPascali died last year.

Picard is going after millions of dollars that were left to the brothers’ beneficiaries, as well as a multimillion-dollar apartment on 74th Street on Manhattan’s Upper East Side and a home in Greenwich, Connecticut. Andrew Madoff left more than $15 million in property to his children, ex-wife and fiancee in his will, court records show. Mark Madoff’s will listed assets of $18.6 million, including almost $9 million in stocks and bonds.

The trustee likely wants to "deprive every Madoff -- or Madoff relation -- of any possible fruit of the fraud," said Richard Scheff, a former federal prosecutor who’s chairman of Montgomery McCracken Walker & Rhoads LLP in Philadelphia. The new complaint, if it’s approved, will also "send a message to Bernie Madoff that his crimes will plague his family for the rest of his life and beyond."