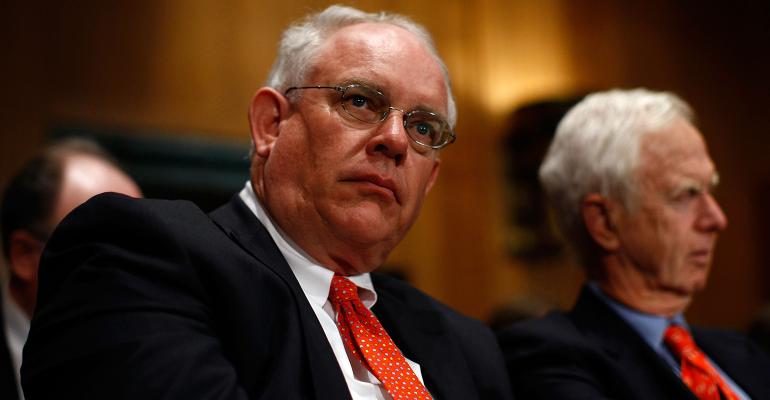 Richard Breeden, the Madoff Victim Fund administrator, racked up $38.8 million in billings while investors are still waiting for their checks.

(Bloomberg) --A firm hired by the U.S. to distribute $4 billion to victims of  Bernard Madoff’s Ponzi scheme has racked up $38.8 million in billings over four years. The investors are still waiting for their first checks, though.

The Justice Department disclosed its payments to Richard Breeden, the Madoff Victim Fund administrator, in response to a Freedom of Information Act request by Bloomberg News. Breeden’s fees, which are being paid from cash in the fund, cover his work through 2016.

The delay highlights how 8 1/2 years after Madoff’s arrest investors are still scrambling to recover money from a U.S. fund that was announced with great fanfare. Victims have recovered billions of dollars from another fund, but they have yet to be made whole.

"It’s very frustrating that people are making money off us like this, using money that was recovered for victims," said Daphne Brogdon, a Food Network personality, whose family lost about $5 million in the Madoff scam. "They’re eating away at whatever percentage we could possibly get."

A message left with a representative of Breeden’s firm, RCB Fund Services LLC, wasn’t returned. Justice Department spokeswoman Dawn Dearden declined to comment on the fees or claims process but pointed to information on the fund’s website.

"We now expect that the initial distribution will take place sometime in 2017 and will be larger than we originally had anticipated," Breeden, a former chairman of the U.S. Securities and Exchange Commission, wrote on the website.

The compensation fund was created in December 2012 to repay thousands of Madoff’s victims after the U.S. seized $2.4 billion from the estate of one of his biggest investors, the late Jeffry Picower. The fund grew by $1.7 billion following a 2014 forfeiture deal with Madoff’s bank, JPMorgan Chase & Co., which was accused of turning a blind eye to the scam.

Breeden estimated in February 2016 that as many as 40,000 victims would get initial payments by the end of that year. They didn’t. An update on the website in January cited the time-consuming claims process and issues with inadequate paperwork from some victims.

The Justice Department is “notoriously slow” making decisions on forfeited assets, said Jon Barooshian, a white-collar defense lawyer at Bowditch & Dewey in Boston who has dealt with forfeiture issues.

"I’m surprised it’s taking so long, but I don’t know if the fault will fall at Richard Breeden’s feet. It might be more of an internal DOJ issue," said Barooshian, who isn’t involved in the Madoff case.

By comparison, Irving Picard, who is overseeing the liquidation of Madoff’s firm, has paid out more than $9 billion since 2009. Picard, a lawyer at Baker & Hostetler LLP, brought numerous lawsuits to recover assets, and his fund is administered separately from Breeden’s under different U.S. laws.

Picard has racked up considerable fees himself, telling ABC News in 2015 that his firm might collect as much as $1 billion when all is done. He called it a “very good return on an investment.” His fees are paid by the industry-financed Securities Investor Protection Corp. rather than from money recovered for victims.

Heather Wlodek, a spokeswoman for Baker & Hostetler, declined to comment.

Madoff, 79, pleaded guilty to fraud in 2009 and is serving a 150-year sentence. His victims lost a combined $17.5 billion in principal, though their final account statements totaled about $64 billion including profit from bogus trades.

Picard accepted claims only from Madoff’s direct account holders. That meant customers of so-called feeder funds, which directed cash to Madoff’s firm for years, weren’t eligible. Feeder funds could, however, file claims with Picard and repay their investors if they received payments from the trustee.

Breeden accepted claims from all Madoff investors, including feeder funds. That increased the amount of work, particularly because Madoff’s records don’t have any information about feeder-fund customers that could be used to verify claims.

In 2013, the fund’s website said the process "is moving forward toward necessary decisions in the relatively near term.” A year ago, Breeden said he was preparing to recommend approval of more than 25,000 claims covering almost $4 billion in losses, but he didn’t say when checks might go out. He also said he fund would recommend denial of more than 7,500 claims covering more than $25 billion of claimed losses that didn’t satisfy requirements of the plan.

Breeden was hired months after distributing more than $728 million to about 8,500 Adelphia Communications Inc. victims, which he described as "the largest single distribution of forfeited assets to victims in Department of Justice history." He served in similar roles after the collapses of Enron Corp. and WorldCom Inc.