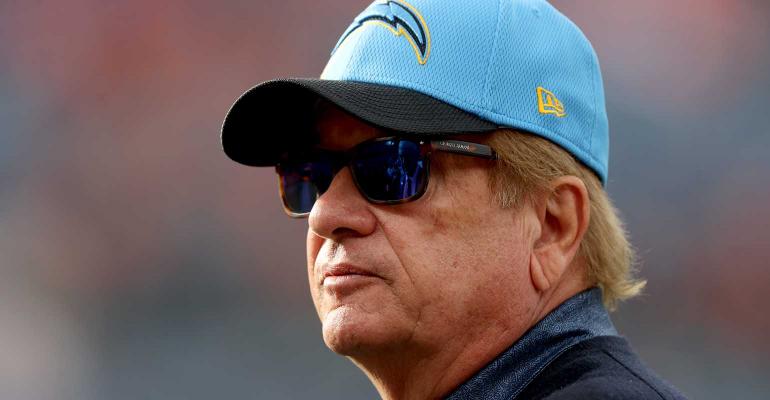 The LA Chargers’ Owners Are Disputing Their Tax Bill

Dean Spanos, the current owner of the NFL’s Los Angeles Chargers, and sister Dea Spanos Berberian, both executors of the estates of Alexander Spanos, the former billionaire owner of the Chargers, and his wife Faye Spanos, are challenging $5.8 million in tax deficiencies and penalties assessed against the estates. Specifically, the couple’s children are protesting $4 million in tax deficiencies, $994,819 in penalties and $798,183 in accuracy-related penalties assessed against the Spanos Family Trust (SFT) for the 2017 tax year.

The trust became an irrevocable nongrantor trust after the couple’s death in 2018, with the couple’s four children as the primary beneficiaries. This isn’t Berberian’s first lawsuit involving the trust; last year she filed suit asking that the Los Angeles County Superior Court force the sale of the team, citing the trust’s mounting debts and dire financial situation, out of fears that the trust might not be able to pay out the more than $22 million that it had pledged to various charities.

According to Berberian and Spanos, the Internal Revenue Service erred in making several adjustments to the trust’s 2017 return, which was timely filed by the executors in 2019. In a petition filed in Tax Court, the two children claim that the IRS’ audit of the trust’s 2017 returns was initiated without informing the executors or their representatives. As a result, the executors were unable to provide the IRS with any documents or records and didn’t learn of the audit until they received a notice of deficiency on Oct. 12, 2021.

Based on the petition, on the 2017 return, deductions were carried over for charitable contributions in the amount of $2,721,600, from the 2015 and 2016 tax years, both tax years that are currently under IRS audit. Because the 2015 and 2016 audits aren’t yet resolved, it continues, “the contributions haven’t been absorbed by prior tax years and are presently wholly available for carryover to the 2017 tax year.”

The petition also alleges that the trust was incorrectly assigned $14 million in cancellation of indebtedness income based on a flawed Schedule K-1 issued to the trust by Trinity Capital Development LLC, a real estate investment company of which the SFT owns 76%.

Lastly, the petition claims that the IRS wrongly disallowed $2.8 million in losses, which the petitioners claimed on the basis that they were “at risk” within the meaning of Internal Revenue Code Section 465. “Trinity's Amended K-1 shows that for the tax year ending Sept. 30, 2018: (1) the SFT had a beginning tax basis capital account of negative $57,131,676, (2) the SFT’s share of Trinity's ordinary losses and nondeductible expenses was $2,846,795 and $309, respectively, resulting in an ending tax basis capital account balance of negative $59,978,780, and (3) the SFT’s share of Trinity's recourse liabilities was $100,571,250,” which demonstrates that the trust was sufficiently at risk for the claimed losses.

As a result, Spanos and Berberian are asking that the court find that the listed adjustments were made in error and that the trust owes no income tax for the 2017 tax year. Furthermore, they also contest the IRC Section 6551(a) penalty, as they claim the 2017 return was timely filed. To the extent that any tax is owed, the petition argues that the executors had reasonable cause for underpayment and acted in good faith.

“The taxpayers seem confident that penalties assessed pursuant to IRC Section 6651(a)(1), Failure to File Penalty, and Section 6662, Accuracy Related Penalty, should be abated,” says Harvey I. Bezozi, a tax expert based in Boca Raton, Fla. “Both penalties are quite severe, maxing out at 25% and 20% respectively.”

However, he continues, “Getting the IRS to agree to Reasonable Cause abatements is doable and involves a combination of techniques including a thorough presentation of the facts and circumstances, coupled with a polished delivery using both negotiating and interpersonal skills.”