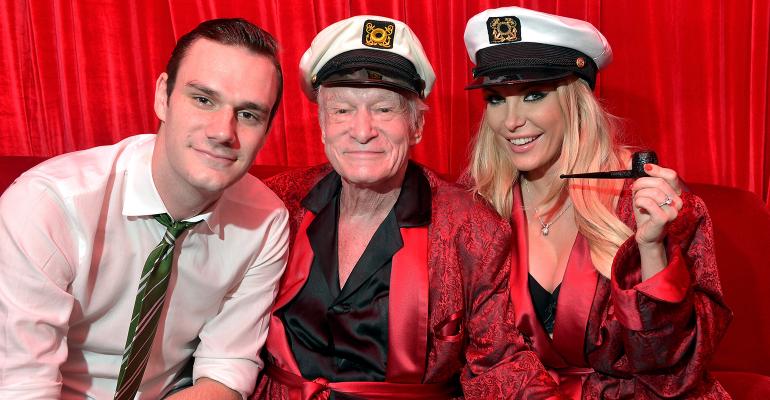 It also makes sure to disinherit any posthumously conceived children.

Hugh Hefner, the late founder of Playboy, has always been vocal about his distaste for drugs and alcohol. It’s now been revealed that Hefner’s trust stays true to those views—by including a substance abuse clause that requires his heirs (third wife Crystal Harris and his four children) to stay sober or risk missing out on their inheritance.

According to new details that emerged thanks to a petition filed in Los Angeles by the trustee, the clause specifically provides that “if the trustees reasonably believe that a beneficiary of any trust routinely or frequently uses or consumes any illegal substance so as to be physically or psychologically dependent upon that substance, or is clinically dependent upon the use or consumption of alcohol or any other legal drug or chemical substance that is not prescribed by a board certified medical doctor or psychiatrist in a current program of treatment supervised by such doctor or psychiatrist,” any distributions to the beneficiary will be suspended. Hefner, however, is clearly a believer in second chances, as the trust instructs that distributions can resume after indication that a beneficiary has been clean for 12 months. Determining sobriety, and whether the beneficiary is able to care for himself or herself, is left in the discretion of the trustee, who’s allowed to request a drug test on suspicion of any substance abuse.

Placing restrictions on an inheritance is common practice. "While some restrictions may appear to be unfounded and are perhaps included solely as a means to control from the grave, drug and alcohol testing provisions are more often included out of genuine love and concern, especially when a beneficiary suffers from an addiction" says Kevin L. Johns, partner at Wyatt, Tarrant & Combs, LLP in Lexington, Ky. He went on to say that he has seen a significant increase in clients’ desires to require drug and alcohol testing, such as in Mr. Hefner’s plan, to protect beneficiaries and promote healthy behavior. Johns believes that we will continue to see such restrictions put in place in estate plans given the epidemic of addiction in this country.

Notorious for his sexual lifestyle, Hefner also went to great lengths to take posthumously conceived children into consideration (or at least his extra savvy estate planner certainly did). His trust makes sure to disinherit “any person who claims to be a child of mine, including any child of mine conceived after my death, unless such child lived with me in my household and was acknowledged by me in writing to be my child.”

Also notably, Hefner allowed for his sons, Marston and Cooper Hefner, to be appointed as co-trustees after they turn 30 years old, acknowledging they may have “existing or potential conflicts of interest in the administration, management and distribution” of the estate, but explaining that this was his desire given their “special knowledge and skills and relationship” to him. Such appointment certainly must have been a point of contention for the estate planner, who likely advised Hefner of the risks of family tension and disputes that may arise as a result, but it’s a great reminder that a client’s wishes are the driving force of an estate plan.

For more information on effectively advising clients with a family member suffering from addiction and some language to include in a trust when dealing with a known addict, see Kevin L. Johns’ recent article on the topic.