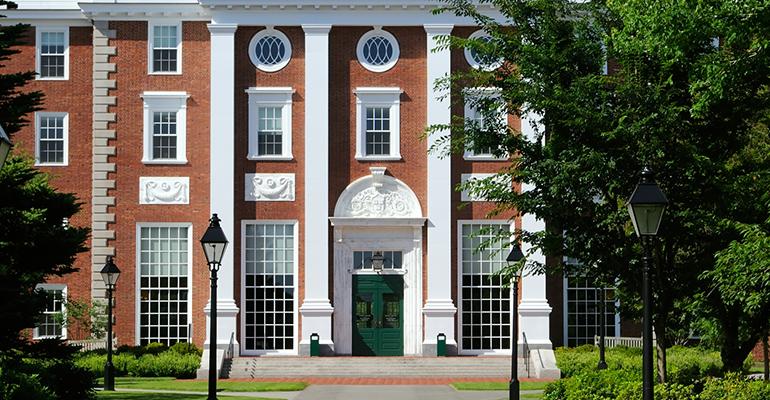 Harvard Does a Trade You Should Never Make

(Bloomberg View) -- The Harvard Management Co., which oversees Harvard University’s endowment and other investments, just released its 2016 annual report. Its grim reading: the fund had a negative return of 2 percent and was worth about $2 billion less than a year a year earlier, underperforming its benchmarks by a pretty significant margin.

At $35.7 billion, the university's endowment is the biggest in the world. And let's get it out of the way quickly -- anyone can have a bad year. But here's what should be of greater concern to alums and donors: the processes that the university and the management company use to look after this huge pile of money.

First, a little history. Harvard’s endowment wasn’t always a problem student. It once was one of the best in the land. But the combination of academic hubris and political correctness led to a series of terrible -- and expensive -- decisions.

Let's start with Dr. Terry M. Bennett and alums like him. He is Harvard Medical School, class of 1964, and at one time a regular and generous donor to the medical school. He also was one of the alums quoted by the New York Times in 2004 who was threatening to withhold future gifts if Harvard didn’t cut the compensation for money managers who at the time were delivering above-benchmark returns. “The managers of the endowment took home enough money last year to send more than 4,000 students to Harvard for a year,” Bennett told the Times.

Eventually, Harvard bent to the wishes of its alums and faculty, which also objected to management-company pay levels. Harvard then went ahead and replaced the outperforming team of active money managers with another team of active managers. Investment performance has never recovered. After years of reliable returns and management stability, both are lacking; the in-house management arm is now looking for its fourth chief executive officer in a decade. That sort of turmoil is never good for performance.

Yet through it all, Harvard has continued to have the highest-paid endowment management team of any university.

The issue now should be over the investment process, especially how much Harvard is overpaying to achieve subpar results. According to the annual report released by the management company, the endowment is festooned with expensive private equity, hedge funds and commodities holdings.

Consider two of the three biggest portfolio components: Private equity made up 20 percent of the endowment's investments -- the biggest of any sector -- and delivered a 2.6 percent return (and a 0.3 percent annual loss during the past five years). Meanwhile, hedge funds, which made up 14 percent of the endowment's holdings, returned negative 1.2 percent (and a 2.2 percent annual gain during the past five years). But what seems to be missing here is information on the fees and charges for these notoriously expensive investments. For all we know, returns were significantly worse after fees.

Among some pension funds and university endowments, investments in these areas were all the rage during much of the early and mid-2000s. But high costs and a decade of underperformance have taken much of the shine off these so-called alternatives. That is why the California Public Employees' Retirement System, or CalPERS, abandoned hedge funds in 2014.

Perhaps most surprising has been the dismal returns of the equity portion of Harvard's portfolio: 400 basis points worse than the benchmark. If ever there was an argument for endowments to turn to passive indexing, Harvard is it.

There's an important lesson here, and maybe Harvard is learning it. Investment management that outperforms benchmarks, as Harvard's once did on a fairly consistent basis, is a rare and delicate thing in a world where so much can go wrong. So when that balance is upset because of interference (for all the wrong reasons) by those who lack an understanding of this or are ill-informed, it shouldn't be surprising that returns suffer. Investing luminaries such as Charlie Ellis, Jack Bogle and Burton Malkiel have argued for ages that simpler and cheaper is better -- and maybe less subject to the second-guessing of outsiders who think they know better. This is true even for $36 billion endowments like Harvard’s.

Here's how I see it: Harvard saved about $50 million in pay for money managers. On the other hand, it looks like it may have sacrificed billions of dollars in investment returns by hiring less-capable asset managers. It almost doesn't need saying that this is a trade you should never make.