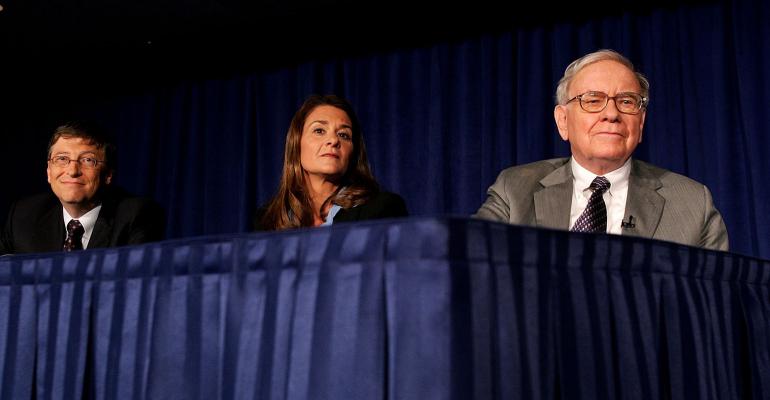 Warren Buffett pledged most of his wealth to charity in 2006, with the Gates Foundation as the largest beneficiary.

(Bloomberg) --Bill and Melinda Gates used their charity’s annual letter to thank Warren Buffett for his contributions, highlighting beneficiaries of his generosity to assure the billionaire that the donations have been well spent.

“If Melinda and I could take you anywhere in the world so you could see your investment at work, we probably would take you to meet sex workers,” Bill Gates wrote in a letter released Tuesday. “I met with a group in Bangalore, and when they talked about their lives, they had me in tears.”

The Microsoft Corp. co-founder spoke of one woman who felt like she had no other job prospects after being left by her husband. When members of the community found out, her daughter was forced out of school and contemplated suicide, Gates wrote. The Bill & Melinda Gates Foundation backs community groups in the region where women can learn about HIV prevention and support one another.

“The women who emerged as leaders in that community were just tough as hell, and all the women benefited from that,” Bill Gates wrote.

Buffett pledged most of his wealth to charity in 2006, with the Gates Foundation as the largest beneficiary. He’s since given more than $19 billion to the group, leaving it to the couple to distribute the funds while he focuses on his work as chairman of Berkshire Hathaway Inc.

“I made the deal I usually make,” Buffett said in 2015 of his pledge to the charity. “They did the work, and I sort of sat around and watched.”

The foundation works to combat disease and poverty globally and backs education initiatives in the U.S. Its leaders have sought to dismiss skepticism about charity’s impact, saying that it has helped extend lifespans and reduce extreme poverty by half in the past quarter century. Melinda Gates said the foundation appreciates Buffett for both his remarkable competitiveness and generosity, and must be worthy of his trust.

“That responsibility weighs on us. To make sure your investment keeps paying higher returns, the world has to save more lives in the future than we’ve saved in the past,” she wrote. “That’s why we have not used your money just to send a grant here and a grant there. We’ve been using it to build an ecosystem of partners that shares its genius to improve lives and end disease.”