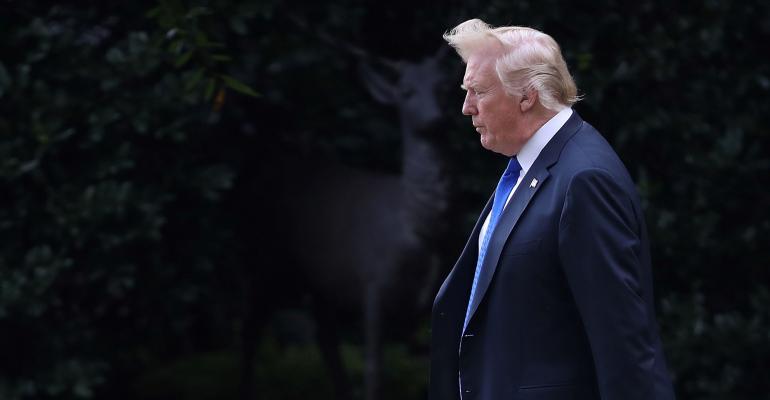 President Donald Trump’s approval ratings have famously sat south of 50 percent since his election. At times, dropping into the mid-30s at its lowest point. It turns out his standing among wealth management professionals isn’t much better.

When asked about what administration policies or proposed policies have been the most influential for financial planning, many pointed to tax reform and deregulation.

“The new tax code has changed many aspects of my business,” one respondent wrote. “The estate tax is so far above most of my client's net worth that it doesn't need to be planned for except for a very small number who have the chance to appreciate their assets closer to the limit. The code rewards self-employed and business income over wages, so I have steered many client's towards incorporating if the arrangement is possible for them. This has led to more small business retirement plans to be opened.”

Another added, “Charitable giving has changed due to the new standard deduction and the financial advisory fee deduction ending has been unpopular with clients.”

But not everyone was happy with these measures.

“While I believe the tax reform and the rollback of environmental, banking, and business legislation and rules has been a boon to the big corporations, big banks, and to the wealthier segment of society, it is an unsustainable magic show,” a respondent wrote. “Does anyone believe that our supposedly high taxes were keeping pace with the need for infrastructure upgrade and repair? Cutting taxes pleases people today but the piper must be paid. You don't cut taxes at economic and market highs only to leave taxes to be raised later when the bills need to be paid and the economy and markets are at a low. This is an unsustainable ply for short-term political gains.”

Overall, more than 2,100 Wealthmanagement.com readers responded to the poll, which was conducted earlier this month. The following gallery highlights the opinions of respondents that were identified as financial advisors, family offices and estate attorneys, as well as the overall response rates.