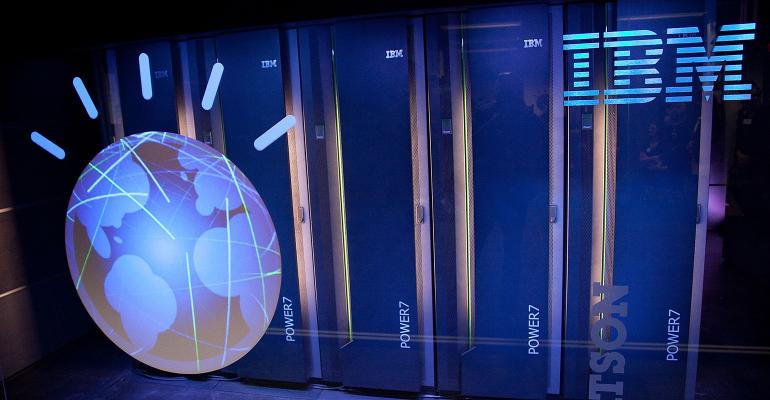 A Famous Robot Wants to Ease Your Tax Pain

H&R Block is enlisting IBM's supercomputer Watson to change how your clients do their taxes.

(Bloomberg) --H&R Block is out to wrest back market share from its online tax-prep rivals with such aggressive measures as free services and interest-free advances on refunds—oh, and plunking a supercomputing Jeopardy star down on the desks of its 70,000 tax preparers.

For this tax season, H&R Block has put an additional computer screen on each preparer's desk, facing the customer, and hired IBM's famous Watson computer to control what's on it. Watson's goal is to solve a problem that plagues all tax preparers, both in person and online: human error.

The calculations done by tax-prep software are flawless, but its users make mistakes—forgetting to mention a source of income, say, or misunderstanding what the Internal Revenue Service is asking. What's a capital loss carryover, anyway? Does a political donation count as a charitable contribution? Mess up the answer, and the IRS may notice. In 2015, it sent taxpayers 1.7 million notices about mathematical and clerical errors on returns.

A skilled tax preparer, or well-designed software, can minimize these errors by asking taxpayers the right questions and explaining the process. H&R Block is hoping Watson can make its human preparers better at their jobs, not to mention offer a 62-year-old company some high-tech bragging rights.

H&R Block has been fighting the rise of do-it-yourself tax software for decades. It has its own online service, but in the U.S., its 12,000 storefronts still bring in almost two-thirds of its customers and 89 percent of its tax prep fees. And last year, its arch-rival, Intuit Inc.'s TurboTax, scored a decisive victory: TurboTax filings soared 12 percent from the previous year, while the number of customers who showed up at H&R Block storefronts was down almost 6 percent.

So H&R Block teamed up with International Business Machines Corp. Six years after Watson first appeared on Alex Trebek's quiz show, Jon Hamm announced in H&R Block’s Super Bowl ad this month that the supercomputer was being “unleashed on your taxes.”

Both H&R Block and IBM insist Watson is all about helping tax preparers do a better job, not replacing them. “The tax professional is still always in control,” said Meg Sutton, H&R Block’s director of retail client experience. Preparers still manually enter your W-2s, 1099s, and other information into the company's in-office software, BlockWorks, and they still ultimately decide which credits and deductions you’re eligible for.

So what is Watson doing?

When you arrive at an H&R Block office, the preparer asks about your tax situation and how it might have changed over the past year. The graphics on the Watson screen facing you suggest more than a dozen topics to cover, including homeownership, medical issues, debt forgiveness, charity, investments. Your preparer takes notes on your conversation, and Watson analyzes them.

Bought a cow? Farm lights up on the screen. Mention tuition payments, and Education blinks on. Sold some stocks? Investments. Deployed to Iraq? Military, with a gold star.

There's a faint air of gimmickry about all this. As if you wouldn't have mentioned to your tax preparer at some point that you're a farmer?

Still, while it may seem obvious you'd tell a preparer you're in the army or have some investments, not everyone understands the tax implications of investing or military service. (Come to think, not everyone who buys a cow is a farmer.) The idea is to make sure you and your preparer don’t miss anything. The second screen also lets you watch in real time as the preparer goes through the filing process.

The new setup, Sutton said, “enhances the relationship between the tax professional and the client." Customers are often in a rush to get in and out of the tax prep office. Watson tries to slow things down, “sparking conversation along the way,” she said. In the end, the humans remain in charge. If your preparer decides you don’t qualify for an education tax credit, the lit-up Education logo on your screen turns off.

Watson is essentially creating a set of “yellow stickies on a wall” to guide taxpayers through the filing process, said Ed Harbour, IBM’s vice president of Watson implementations. (IBM and H&R Block considered adding further information to the second screen but decided too much data could confuse or overwhelm customers.)

To do its job, Watson deploys two capabilities behind the scenes: analyzing natural language and connecting related concepts. These are the same Watson software packages being used to help petroleum engineers keep track of valves on a drilling rig, and oncologists wade through reams of research and clinical notes.

The U.S. tax code presents unique challenges, however. If you mention that cow, Watson needs to understand what cow means and how it might relate, in tax terms, to a farming expense.

It took about three months last year to make Watson a tax expert and sync it up with H&R Block’s systems, Harbour said. The supercomputer absorbed decades of transcripts of conversations between H&R Block preparers and customers and then worked with about 250 tax professionals to refine its understanding of taxes.

Can Watson actually help H&R Block win over customers? At the very least, the new technology keeps customers in the loop while their taxes are prepared, and it could prevent them from getting bored or confused while their preparers type away. At best, the graphics controlled by Watson could prompt customers to ask more questions, get an additional tax credit, or maybe even avoid an audit.