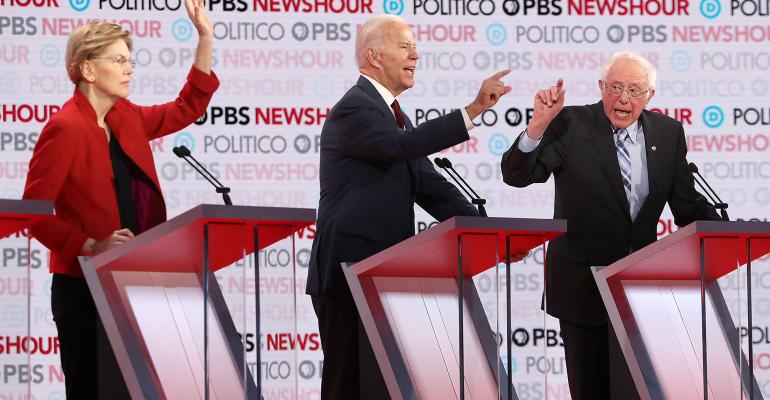 Family-Owned Businesses Urged to Sell Before the Party Ends

For the owner of a multimillion-dollar company, selling by the end of 2020 could result in a much smaller tax bill than striking a deal in 2021 under new rules.

(Bloomberg) -- Families who own businesses are getting this piece of New Year’s advice: Sell.

Not only is it a great time to put a private company up for sale while the economy is strong and many deep-pocketed buyers are circling, wealth advisers are also reminding clients of looming political uncertainty toward the end of 2020.

If President Donald Trump loses the election, Democrats running to replace him have promised to boost taxes on the rich. While the wealth tax proposed by senators Elizabeth Warren and Bernie Sanders gets the most attention, other top candidates have ideas for squeezing the 0.1%. Former Vice President Joe Biden, for example, said he wants to almost double the rate on long-term capital gains to 39.6% for taxpayers earning more than $1 million a year.

“The Democratic zeitgeist now seems to be higher taxes,” said Brad Dillon, senior wealth strategist at UBS Group AG in New York. “If you were thinking about selling your business in the next two years, it’s definitely something to think about.”

For the owner of a multimillion-dollar company, selling by the end of 2020 could result in a much smaller tax bill than striking a deal in 2021 under new rules. Of course, a new president would need Congress to go along with a tax hike, and that’s hardly a certainty even if Trump is defeated.

“This is as good as it gets,” said Marshall Rowe, president for business-owner services at Colony Group, where he advises owners of companies worth about $50 million to $350 million.

With the stock market setting record highs almost daily, interest rates near historic lows and the broader economy doing well, owners are getting high valuations for their businesses. The family of the founder of Les Schwab Tire Centers is weighing a sale that could value the Bend, Oregon-based retail chain, with more than 450 locations in 10 states, at more than $3 billion.

There are plenty of potential buyers seeking acquisitions.

Many super-rich families are also in the hunt, adding to the competition. They’re building out family offices -- mini investment firms set up to manage their personal wealth -- and looking for recession-proof businesses to include in their portfolios. In July, for example, the family office tied to billionaire Chicagoan Tony Pritzker acquired wastewater treatment company Valicor Environmental Services.

When 111 U.S. family offices were surveyed by Fidelity Family Office Services last year, 98% said they expected to maintain or increase direct investments over the next three to five years.

Buyers are also coming to the U.S. from abroad. A Qatari-backed firm snapped up the Montage Beverly Hills hotel last month, while Africa’s richest person, Aliko Dangote, plans to diversify his wealth by opening an investment office in New York.

The decision to sell a family business isn’t made lightly. The process of finding a buyer, agreeing on a price and completing the transaction can take a year or more.

Some families also aren’t sure they want to let go of their life’s work. That’s driving investors to make more creative pitches.

“We’ve seen a number of families that are reluctant to give up control immediately but may be willing to sell a minority position first, then after getting comfortable, sell a controlling stake over time,” said Brian Frank, who runs Declaration Partners LP, which manages Carlyle co-founder David Rubenstein’s family fortune.

“Clients are more open right now because the market conditions are so good,” said Lisa Featherngill, head of legacy and wealth planning at Abbot Downing, a unit of San Francisco-based Wells Fargo & Co. But “they’re not going to take the deal until it’s the right deal.”

In this environment, some business owners are getting offers they can’t refuse.

“There is an acceleration of a desire to sell,” said Joan Crain, global family wealth strategist at Bank of New York Mellon Corp., citing “clients who were lackadaisical” but “are now very motivated.”

If conditions change, advisers want to make sure they’re not blamed for failing to warn clients to sell when times were good. That’s particularly true for the many Baby Boomer business owners who are now approaching retirement age.

Older owners have plenty of good reasons to unload their businesses now, their advisers say. Many are already worried about the future of their industries, especially the threat of disruption from new competitors or technology changes -- “getting Amazon-ed,” as Rowe puts it. Aging business owners often realize that a buyer with deep pockets is more likely to have the expertise and resources to keep up.

Many Boomers hoped their children would take over at some point, but Rowe and others said that’s happening much less than it used to. Advisers often need to offer a reality check to owners whose children aren’t stepping up to take over. “We can see objectively that’s not going to happen -- time is running out,” Crain said. “Sometimes we have to nudge them.”

The 2020 election is one risk among many facing closely held businesses, but it gives advisers more ammunition to persuade clients that they shouldn’t miss the chance for a lucrative exit.

If Democrats win the White House and both chambers of Congress, the wealthy could face a number of expensive tax changes. In addition to targeting wealth and capital-gains income, Democrats, including Sanders and Biden, have proposed changes to estate tax rules that would make it harder for the wealthy to pass on fortunes to children, grandchildren and beyond.

Democrats could also reverse provisions of the tax overhaul enacted in late 2017. The law boosted many companies’ profits and valuations by slashing the corporate tax rate and creating a controversial 20% break for owners of many other businesses.

Then there are regulatory matters that affect particular industries. Many business owners are fans of Trump’s hands-off approach to issues including environmental and labor rules. A Democrat in the White House would almost certainly seek to reinstate and strengthen regulations that Trump rolled back and wouldn’t need Congressional approval to do so.

“If there’s an administration change, the risks are bigger than taxes,” Rowe said. For his clients, “it’s a combination of those things that is getting them a little spooked.”

While it may feel far away and unlikely now, a big Democratic victory in November could trigger a stampede of deals as rich clients grab one last chance to exploit the current rules. Estate planners, financial advisers and lawyers said they would expect an extremely busy several weeks after a Trump loss.

“If a Democrat is elected,” UBS’s Dillon said, “it’s going to be a madhouse.”

--With assistance from Laura Davison and Heather Perlberg.