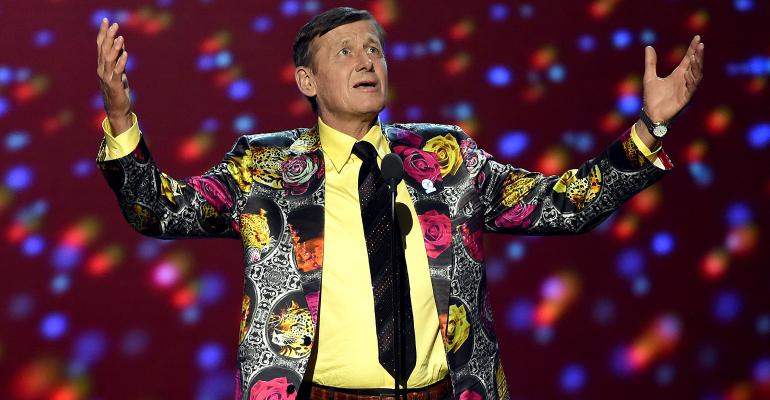 The perils of a blended family.

The widow of a man best known for his interesting stylistic decisions is making an interesting estate planning one.

NBA on TNT sideline reporter Craig Sager, so well-known for his outlandish sartorial choices that no less an authority than Charles Barkley once exclaimed, “We’ve got a pimp doing interviews!”, died in December 2016 after a lengthy battle with leukemia. The details of his will, which went public last week, were somewhat notable for his disinheritance of his three adult children from his first marriage in favor of leaving everything to his second wife, Stacy Jo Sager.

Normally this is the sort of detail we’d jump on, but it seemed as though Sager’s children had been made aware of their status in his will and at least came to terms with it. According to a statement issued via Twitter by Sager’s oldest daughter Kacy, the children had no intention of contesting their father’s will. However, where this story takes an odd turn (and why Kacy had to issue a statement at all) is Stacy Jo’s decision to have the will, which is governed by Georgia law, probated in solemn form, which gives us the opportunity to talk about the different kinds of probate. Fun!

A will needs to be probated in order for it to be deemed valid. “Probate” basically means “to prove.” A nominated executor is not authorized by law to act in that capacity until a will is proven to the court to be the Last Will and Testament of the deceased.

Most jurisdictions, including Georgia, allow the option for an expedited probate process colloquially known as “common form.” Though the exact details vary by state, common form allows a nominated executor to begin the initial proving process without involving anyone else. Potential heirs are entitled to request and receive copies of the will from the court and a deadline is set (in Georgia it’s 4 years after the completion of proceedings) by which any potential will contests must be filed.

Stacy Jo opted for the more traditional solemn form, which requires that all potential heirs (effectively anyone who would stand to inherit via intestacy), regardless if they’re named in the will, be notified and given the opportunity to acknowledge the document as valid. In Georgia, if heirs don’t acknowledge the will’s validity initially, they’ll be served by the court—which is exactly what Sager’s children are going through at the moment.

Though common form probate is easier to get started, it also takes longer to close. It’s not terribly uncommon for beneficiaries to actually receive their inheritances and then subsequently be forced to hand them over to someone else years later after a successful will contest. For most estates, contests aren’t a major issue, so common form is simply easier.

Solemn form is more often employed in potentially contentious estates because it forces heirs to either bring their contests up front (and not years later) or be required to acknowledge the will, generally removing their ability to bring the contest at a later date. In Georgia, for example, an executor can petition to be relieved of their responsibilities within 6 months of being appointed—much faster than 4 years.

Sager’s case is an interesting one because it doesn’t fit quite so neatly into either of these boxes. The children and their stepmother don’t get along, so solemn form appears to be the obvious choice. However, if the children had made their intentions not to challenge the will known beforehand, Stacy Jo electing solemn form probate effectively just rubs it in their faces that they were disinherited, all while forcing a bunch of people who don’t get along into a courtroom together. Then again, why would Stacy Jo take them at their word?

Still, though the intention of solemn form is often to prevent potential contests, it wouldn’t be surprising to me if such action actually motivated a contest where one wouldn’t have been made previously, simply out of spite. Though to be clear, there’s no indication that the Sager children will choose this option in this case.

Ultimately, it’s important to realize that the method of probate an executor chooses has implications beyond just how quickly they can wrap things up.