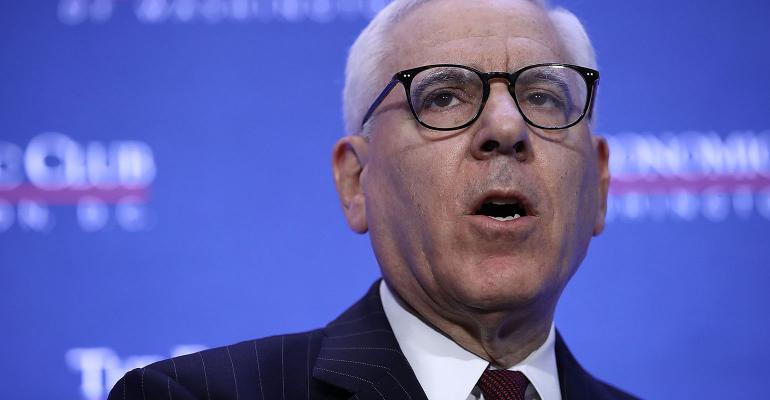 (Bloomberg) --David Rubenstein’s love of historical documents runs deep. The billionaire co-founder of Carlyle Group LP owns a copy of the Magna Carta from 1297, a rare facsimile of the Declaration of Independence and an Emancipation Proclamation signed by Abraham Lincoln.

When it came time for Rubenstein, 68, to name his family office, he dubbed it Declaration Capital. He created the firm last year as he stepped back from his role as co-chief executive officer of Carlyle and became co-executive chairman.

He recruited Brian Frank, a former money manager at Michael Dell’s MSD Partners, to run the unit targeting venture, growth and family-owned businesses, areas that wouldn’t directly overlap with Carlyle, said a person with knowledge of the matter, who asked not to be identified because the plans are private. The firm may ultimately seek outside capital beyond Rubenstein’s fortune.

The staff includes Rubenstein’s daughter, Alexa Rachlin, who did a four-year stint in private wealth management at Goldman Sachs Group Inc. and was an investment director at Cambridge Associates, according to her LinkedIn profile.

Rubenstein declined to comment through a Carlyle spokesman, and Frank didn’t reply to a message seeking comment.

Family offices are increasingly common for the ultra-wealthy to manage their fortunes and take care of their personal needs. Rubenstein, who’s worth $2.8 billion, according to the Bloomberg Billionaires Index, is one of the most active philanthropists in the U.S. and hosts a Bloomberg Television show interviewing world leaders and business titans.

Family offices can present challenges for private equity and other investment professionals. They “need to be sensitive to potential conflicts of interest,” said R. Scott Beach, head of the family office practice at law firm Day Pitney. “They should invest in strategies, assets or sectors that they don’t follow in their funds.”

Bill Ackman invited scrutiny when Valeant Pharmaceuticals International Inc., a company he championed at the helm of his hedge fund, acquired Sprout Pharmaceuticals, a private venture funded by his family office. Some executives with active family offices have been confronted by investors questioning how much time they’re devoting to their funds.

To avoid any potential conflicts of interest, Declaration will have to get approval from Carlyle on transactions. Declaration has completed about 10 deals, a person with knowledge of the matter said. In April, it took part in a $50 million funding round for Workfusion, a company that develops intelligent automation software.

Rubenstein founded Carlyle in 1987 with Bill Conway and Dan D’Aniello, and the trio initially backed the venture with $5 million. They built the Washington-based company into one of the world’s largest managers of alternative assets -- a pioneer in leveraged buyouts that’s expanded globally into credit, real estate, energy and infrastructure investments.

One of its most successful investments was a buyout of DuPont Co.’s auto-paint business in 2013. Carlyle made $4.5 billion, its second-biggest profit ever on the deal, and an annualized return of 80 percent. The gains were second only to the firm’s investments in China Pacific Insurance Group Co. from 2005 to 2007.

Rubenstein and Conway announced in October that they were ceding their roles as co-CEOs to Glenn Youngkin and Kewsong Lee at the start of this year, passing on control of the $201 billion firm to the next generation.