/sites/all/themes/penton_subtheme_wealthmanagement/images/logos/footer.png
Recent
Recent
Morningstar’s ByAllAccounts Integrates With MaxMyInterest
Jul 14, 2020
Redtail CEO Brian McLaughlin Joins Riskalyze Board of Directors
Jul 14, 2020
RIA M&A: Cash Deal Now, Or Opportunity Later?
Jul 14, 2020
Is Diversity and Inclusion a ‘Nice to Have’ or ‘Must Do’ for You?
Jul 14, 2020
RIA M&A Activity Hit Lows, Highs in Q2
Jul 14, 2020
Featured
Poll: 15 Classic Books on Investing and the Markets
Apr 03, 2020
FICO Updates and Their Impact on Credit Scores
May 06, 2020
Franklin Templeton Fires Portfolio Manager Amy Cooper Involved in Central Park Dog Incident
May 26, 2020
The Top Colleges for Financial Planning
Oct 03, 2019
Bloomberg
brought to you by 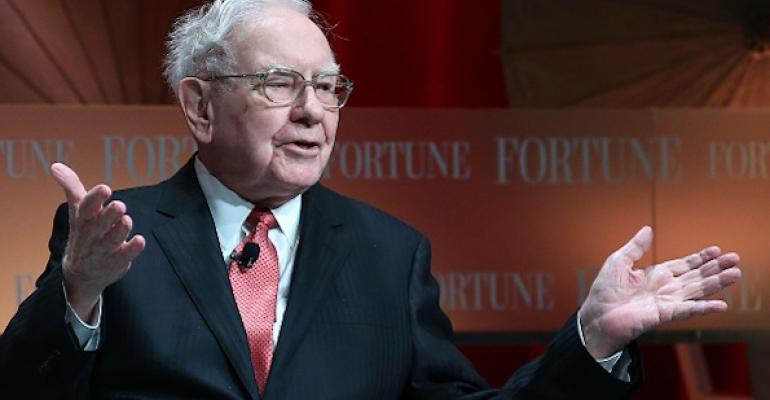 (Bloomberg) -- Warren Buffett said he’s not yet picked a candidate in the U.S. presidential race.

“I think I’m going to wait and see who gets the nomination,” Buffett said Monday in an interview with CNBC. “Normally, I vote for Democrats. We will see what happens.”

Buffett, who runs Berkshire Hathaway Inc., endorsed Hillary Clinton for the 2016 election against now-President Donald Trump, and attended fundraisers for both Clinton and Barack Obama ahead of the 2008 primaries. The son of a Republican U.S. congressman, Buffett, 89, said he’s a capitalist, not a “card-carrying” Democrat.

Democratic candidates vying for the nomination include Vermont Senator Bernie Sanders, who’s gained momentum with victories in Nevada and the New Hampshire primary. While Buffett agrees with Sanders that the country needs to do more for people who are left behind, he doesn’t think that requires dismantling “the golden goose” of capitalism.

“I would certainly vote for him,” Buffett said of Bloomberg. “I don’t think another billionaire supporting him would be the best thing to announce.”

Buffett’s business partner, Charles Munger, said earlier this month that Michael Bloomberg could garner the votes of many moderates, increasing his chances in the election. Munger, a lifelong Republican, declined to name which candidate, if any, he was supporting. Buffett expressed support for Bloomberg in early 2019, ahead of the candidate’s official entry into the race.

U.S. equities dropped Monday as the coronavirus continued to spread beyond China. Buffett said the virus hasn’t affected his long-term outlook on stocks, since he often views investing through a multi-decade lens.

“It is scary stuff,” Buffett said. “I don’t think it should affect what you do in stocks. But in terms of the human race, it’s scary stuff.”

Buffett spoke after releasing his annual letter and fourth-quarter earnings on Saturday. He said in the letter that shareholders can expect to hear more from top lieutenants Ajit Jain and Greg Abel, seen as the top contenders to eventually replace him as CEO. The company’s earnings report showed Berkshire stepped up its share repurchases at the end of 2019, spending $2.2 billion for the biggest tally ever in a single quarter.

Here are some other key takeaways from Buffett’s comments Monday:

“Todd is there and I hope very much that he’s not there very long,” Buffett said. “Our intention always is to promote from within. We would hope to pick out the right person at Geico.”

Buffett criticized companies willing to take on more risk in the hunt for higher returns.

“Reaching for yield is really stupid, but it’s very human,” he said.

Buffett, whose company owns stakes in Delta Air Lines Inc. and Southwest Airlines Co., said it’s “very unlikely” Berkshire would buy an airline outright because of the heavily-regulated nature of the industry.

Buffett’s lunch with Chinese cryptocurrency entrepreneur Justin Sun doesn’t seem to have changed his mind on the asset.

“Cryptocurrencies basically have no value -- they don’t produce anything,” Buffett said.

The billionaire investor’s company owns a sprawling energy empire across the U.S. and even in the U.K. Still, he doesn’t seem to want to add PG&E Corp. to the mix, despite urging from California Governor Gavin Newsom.

PG&E filed for Chapter 11 bankruptcy protection more than a year ago after its equipment was blamed for causing some of the worst fires in California history, resulting in about $30 billion in liabilities.

“It’s too tough,” Buffett said, while praising Newsom. “I don’t know how to solve all that.”

Berkshire sold some of its Wells Fargo & Co. stake in the fourth quarter, taking that investment down to $17 billion at the end of the year. Buffett declined to give his current views on the company and reiterated that the bank made a mistake in not responding to its issues more quickly.

“Some of it was sold down to avoid being over 10%,” Buffett said of the Wells Fargo stake, referring to U.S. regulations governing maximum bank ownership stakes. “We’ve sold more than that.”

Buffett said the company is “still a great business” even after struggles including a major writedown last year.

Berkshire continues to carry the investment at $13.8 billion on its balance sheet, even though its market value was $10.5 billion at the end of 2019.

To contact the reporter on this story:
Katherine Chiglinsky in New York at [email protected]