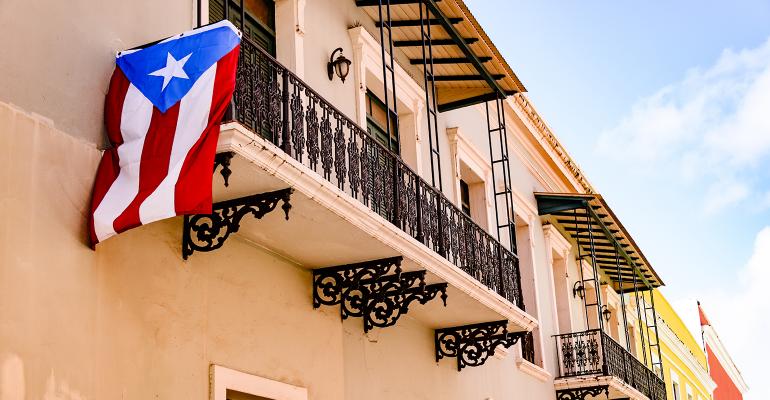 More than 70 law firms have relocated to the island in last decade.

(Bloomberg) -- Veteran plaintiff lawyer Mikal Watts is beginning to learn the meaning of taking it easy.

After 28 years of grinding away on multi-billion dollar mass personal-injury suits, most recently from an office in San Antonio, Texas, Watts decided to make a change. He's still trying cases, but now he gets a big tax break while working from the back deck of his new home looking out onto the Atlantic Ocean near sunny San Juan, Puerto Rico.

The tax incentive is a controversial policy, one that has created bitter resentment among many on the crisis-ravaged island. But Watts isn't thinking much about that right now. He's soaking up the sun and staring out at the blue waters as he sips a vodka tonic at a ritzy outdoor restaurant.

“If I can practice law from anywhere, why not do it from a beautiful beach?” says Watts. “Living here is like a working vacation.”

Watts -- who recently helped negotiate Texas’s $1.6 billion share of a $26 billion nationwide opioid settlement -- reckoned that with the pandemic putting jury trials on hold and pushing court hearings to Zoom, he didn’t need to stay anchored in Texas. So last year, he picked up stakes and joined the steady stream of U.S. lawyers who’ve moved their firms to the U.S. territory over the last decade to cash in on the Caribbean vibe and a 4% federal tax rate, versus 21% on the mainland.

The tax break was launched in 2012 to help lure jobs and investment to the impoverished island, which has grappled with economic fallout from hurricanes and earthquakes. The territory also struggled for five years to restructure more than $70 billion in debt after filing the largest municipal bankruptcy in U.S history.

Public policy analysts are torn over whether the tax incentives are a benefit or a burden to the island. The package has attracted ultra-wealthy hedge fund and private equity managers, and more recently a burgeoning community involved in crypto.

Yet, Puerto Rico’s median income in 2020 was $21,058 and 43% of its residents live below the poverty line, according to U.S. Census Bureau figures.

To qualify for the tax breaks, lawyers and other business owners must buy real estate on the island, live there for at least half the year and make at least $10,000 in charitable donations. Once they’re Puerto Rico residents, they also pay zero tax on capital gains, dividends and interest.

Through word of mouth, several attorneys involved in the opioid litigation each decided to take the Puerto Rico plunge. Their elite firms are now in line to get a portion of more than $2 billion -- one of the biggest legal fee payouts in U.S. history -- for resolving litigation by more than 3,000 state and local governments against opioid makers, distributors and pharmacy chains.

One in that group is Paul Farrell, who moved to the island in January 2021 from West Virginia. He said the tax breaks only apply to legal work physically done on Puerto Rico, such as document reviews, legal research and brief writing.

“So unless the work on the opioid cases was done here, the fees from that work won’t get the 4%,” Farrell said.

Other prominent opioid lawyers -- including Hunter Shkolnik and Paul Napoli –- also have set up shop on the island. Both men declined to comment on whether the move will provide tax breaks for their opioid fees.

Marc Grossman, a New York-based product liability lawyer who made hundreds of millions of dollars suing Merck & Co. over its withdrawn Vioxx painkiller, counts himself as the first U.S. attorney to leave the mainland for Puerto Rico, back in 2014. He says his firm now has about 1,000 employees in his office on the island.

He estimates that more than 70 law firms followed him over the years and opened offices in San Juan -- the territory’s largest city -- and in its suburbs.

“People come for the tax breaks, but they stay for the island life,” said Grossman. He moved his wife and four children to the island and is now co-owner of a professional basketball team, the Guaynabo Mets, along with Watts and Farrell.

Watts, whose maternal grandmother was Puerto Rican, said he knew about the tax breaks long before he decided to make the move. “I got tired of spending half my life on an airplane,” the Texan said. “If I have to go back for a hearing, I’ll do it, but I’d rather just sit on my porch and practice law.”

It’s not a bad perch. The four-bedroom, three-bath oceanfront condominium Watts bought when he sold his San Antonio mansion is in Dorado, about 23 miles (37 kilometers) from San Juan. It adjoins the Ritz Carlton Reserve, a lush 50-acre property developed by the Rockefeller family.

Watts recently stood in his backyard by the infinity pool and watched snorkelers in the ocean ogling brightly colored parrot fish, seahorses and manta rays. In the palm trees, small black birds cooed their songs as a light breeze ruffled leaves. “I’m not much of a beach guy, but my wife sure loves it,” the lawyer said. “And it’s not too bad to sit out here and work.”

Watts won’t say what he paid for his island digs, but real-estate listings for condos in the Dorado area range from about $4 million to about $10 million. Homes go from $9 million to $16 million, according to Sotheby’s Puerto Rican website. Shkolnik and Napoli live in the same development as Watts.

Instead of joining colleagues who snapped up buildings in San Juan, Watts centered his offices in the suburb of Guaynabo and how has more than 70 employees, including 11 lawyers.

Watts, Grossman and Farrell said they didn’t need to bring armies of staff with them when they moved to Puerto Rico. The lawyers say they’ve hired locals for lawyer and paralegal positions and been pleased with the quality of their work.

There’s no shortage of legal talent on the island, thanks to Puerto Rico’s three law schools that have produced a total of about 10,000 attorneys over the years, according to Watts.

Not everybody is happy that big-shot lawyers have come to the territory. Home prices across the island have jumped more than 20% since 2020, according to the Federal Housing Finance Agency. Critics lay the increase directly at the feet of immigrants from the mainland.

The influx of wealthy professionals is “pricing out the middle class in some areas,” said Raul Santiago Bartolomei, a professor of planning at the University of Puerto Rico. He’s skeptical that jobs being created by the law firms arrive will do much to affect the island’s widespread poverty.

Locals are particularly upset that they don’t get to claim the tax incentives, Bartolomei said. “There’s a sense that rich lawyers are getting breaks and those who live here have been left with little,” he noted. “There’s a sense of unfairness.”

Puerto Rican economic development officials credit the incentives with creating some 36,000 jobs and driving investment of more than $2.5 billion in the island.

But the Center for a New Economy, an island-based think tank where Bartolomei is a research fellow, recommended in an April report that some of the island’s 424 tax breaks be eliminated. The center said the package costs Puerto Rico about $21 billion a year, undermines competitiveness, and hinders entrepreneurial activity.

Despite the opposition, the lawyers keep coming.

Chris Coffin, a New Orleans-based class-action lawyer, set up shop in San Juan in February and moved his family to the island. “We visited Puerto Rico and were very impressed with the lifestyle,” Coffin said in an interview. “We don’t see a downside to this move.”

To contact the author of this story:
Jef Feeley in Wilmington at [email protected]