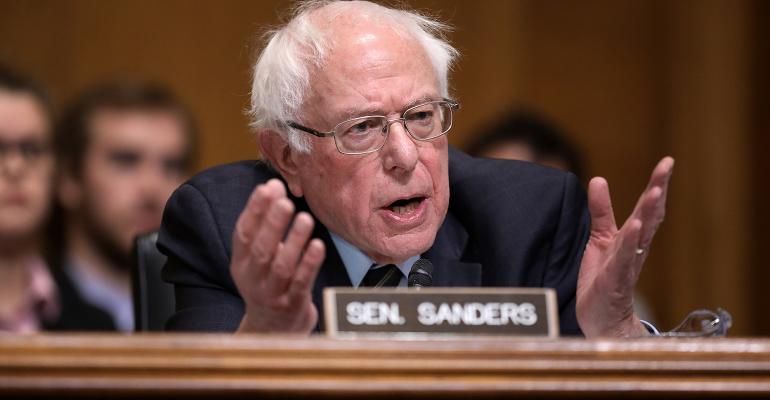 Sanders of Vermont, who is considering a second run for president, said in a statement his plan would apply to the wealthiest 0.2 percent of Americans.

By Arit John and Laura Davison

(Bloomberg) --Independent Senator Bernie Sanders is proposing to expand the estate tax on wealthy Americans, including a rate of up to 77 percent on the value of estates above $1 billion.

Sanders of Vermont, who is considering a second run for president, said in a statement his plan would apply to the wealthiest 0.2 percent of Americans. It would set a 45 percent tax on the value of estates between $3.5 million and $10 million, increasing gradually to 77 percent for amounts more than $1 billion. The current estate tax kicks in when an estate is worth about $11 million.

The legislation would raise up to $2.2 trillion in estate taxes from the families of all 588 billionaires in the U.S. with a combined net worth of more than $3 trillion, according to a summary of the plan.

Sanders’s plan comes as potential Democratic challengers to President Donald Trump eye progressive tax ideas intended to reduce income inequality. Senator Elizabeth Warren of Massachusetts has proposed an annual 2 percent tax on households worth more than $50 million. Sanders, who ran in the Democratic primaries against Hillary Clinton in 2016, hasn’t yet said whether he’ll run in 2020.

The estate tax exemption was $3.5 million as recently as 2009. The 2017 GOP tax overhaul increased the exemption to $11 million through 2025, and some Senate Republicans are renewing an effort to repeal the tax entirely.

While Sanders and Warren represent one approach to reducing income inequality –- breaking up concentrations of wealth among top earners –- other Democratic candidates are directing legislation toward the lowest income brackets.

Senator Kamala Harris, a California Democrat who launched her presidential campaign this week, introduced legislation this month to create a $3,000 refundable tax credit for low-income individuals. The bill includes non-binding language that proposes funding the tax credit by repealing parts of the 2018 Republican tax cut and assessing a fee on large financial institutions.

Polls show that voters are becoming more receptive to the idea of increasing taxes on the wealthy. Freshman Democratic Representative Alexandria Ocasio-Cortez of New York floated a 70 percent top tax rate on incomes of $10 million or more, an idea that 59 percent of people supported in a Hill–HarrisX poll conducted Jan. 12-13.