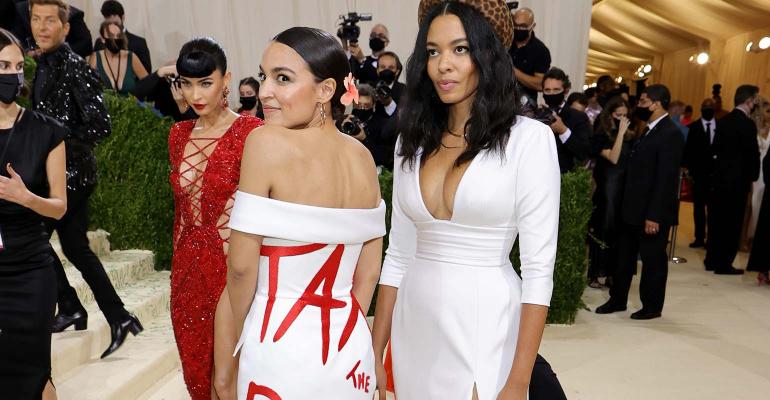 The CFDA fashion awards winner has a history of not paying up.

The statement New York Democratic Rep. Alexandria Ocasio-Cortez was trying to make with her “Tax the Rich” emblazoned dress at the Met Gala last week didn’t exactly go over as planned. Instead, the New York Post this week has exposed that the designer-to-the-rich behind the gown, Aurora James, along with the parent company of her fashion brand, Brother Vellies, has ironically been shirking taxes for years. 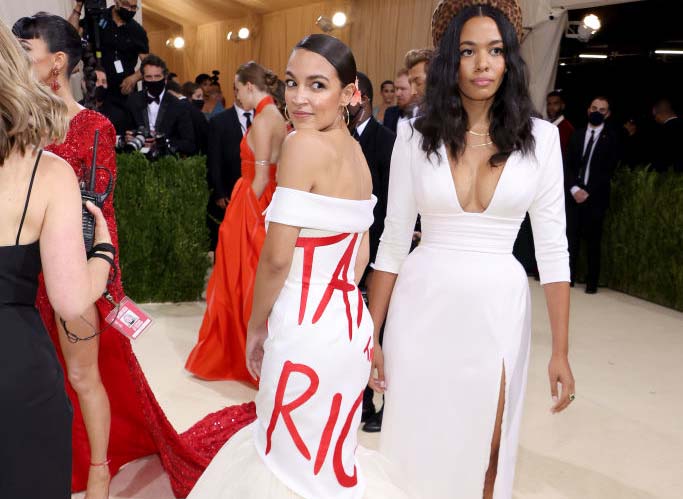 U.S. Rep. Alexandria Ocasio-Cortez (left) made a statement with her dress, designed by Aurora James, at the 2021 Met Gala.

In New York alone, James’ Cultural Brokerage Agency has three open warrants totaling almost $15,000 for failing to withhold income taxes from employees’ paychecks. The company is also in hot water with the Internal Revenue Service—as per the Post, the agency has placed six federal liens on it totaling $103,220, citing its failure to remit employee payroll taxes, meaning it deducted the taxes out of their employees’ paychecks but never sent the money in to the government.

But before one can make the argument that James is a struggling small-business owner of some sort, it’s worth mentioning that the designer is living large—with an Instagram page boasting photos with celebrities in the wealthiest of locals, from Morocco to the Hamptons. If that’s not convincing enough, James also purchased a $1.6 million pad in Los Angeles in September 2020, just as the country was plunging into a coronavirus-fueled recession. That property has already been listed as “delinquent,” owing Los Angeles county $2,504 in property taxes.

It’s safe to say AOC’s collaboration with the designer isn’t a good look for her agenda. AOC also had to take to Instagram to defend her attending the Met Gala in the first place—tickets to the notoriously exclusive event go for $35,000 a pop—writing that “NYC elected officials are regularly invited to and attend the Met due to our responsibilities in overseeing our city’s cultural institutions that serve the public.”