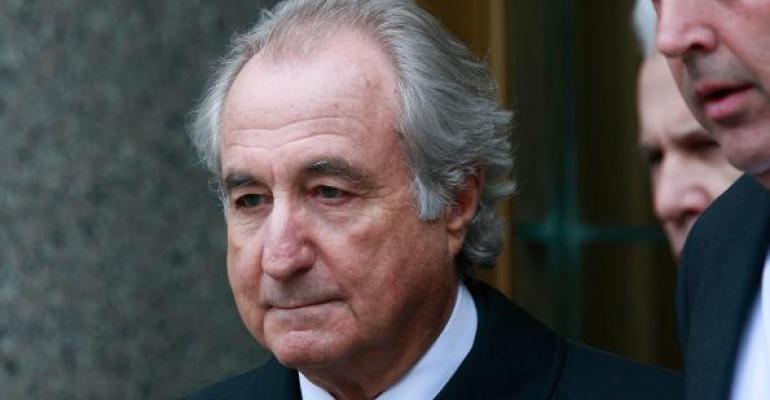 Another Madoff Legacy: Ways for Investors to Keep Ponzi Profits

A series of court rulings have favored investors who profited from the scam, and provided a cheat sheet for how to hold on to suspiciously robust returns.

(Bloomberg) --The legal fallout from Bernard Madoff’s epic fraud includes an ironic twist: a road map for investors wanting to hold on to profits that seem too good to be true.

In the eight years since Madoff’s arrest, a series of recent court decisions have favored investors who profited from the scam, dashing the hopes of trustee Irving Picard to return more to Madoff’s victims who lost $17.5 billion in principal, legal experts say. At the core of the disputes is how far Picard can go to make the Ponzi scheme’s investors whole.

“The rulings all lower the risk associated with investing in something that might be a Ponzi scheme,” said Anthony Casey, a University of Chicago law school professor. “Some of these were inevitable conclusions of law. The courts weren’t necessarily being lenient to the big institutions. It just happens to help the wealthier investors.”

While Picard and his team of New York-based lawyers have recovered about 65 cents on the dollar -- more than anticipated after the collapse of the biggest Ponzi scheme in U.S. history -- the rulings took billions of dollars off the table and now make a 100 percent return seem impossible.

They also provide a cheat sheet for investors on how to hold on to suspiciously robust returns, should it turn out they are the fruits of a fraud. Amanda Remus, a spokeswoman for Picard, declined to comment.

Madoff customers who invested through offshore-feeder funds -- and whose profits were transferred to an overseas account before the scam collapsed -- didn’t need to return them, U.S. Bankruptcy Judge Stuart Bernstein in Manhattan ruled in November. Their cash should stay out of reach in deference to local jurisdictions, Bernstein ruled, meaning victims must turn to non-U.S. courts to recover funds.

The ruling, which may be appealed, rejected the trustee’s claim that investors, including many American citizens, should be subject to U.S. law because they knew their money was going to be invested with Madoff’s New York-based company. It also took about $2 billion off the table for Picard from about 100 cases. The decision “creates a big loophole,” Casey said. “That’s a very straightforward way to reduce your risk if you’re a sophisticated investor.”

That situation benefited early Madoff investors such as Koch Industries, the company run by billionaire brothers Charles and David Koch. They invested with Madoff through offshore accounts, and the ruling allows them to keep more than $20 million in profit. A Koch spokesman did not return e-mail messages seeking comment.

“The court has made it easier for people to benefit from cheating and keep stolen money,” said Tamar Frankel, a Boston University law professor. “If you want to invest in a Ponzi scheme now,” she said, “do it from overseas.”

Picard sued hundreds of Madoff customers who withdrew more money from their accounts than they deposited but weren’t accused of knowing about the fraud. The claims are typical in bankruptcy cases, allowing companies to get back money they transferred out in the years before they were insolvent.

In December 2014, the federal appeals court in Manhattan backed a lower-court ruling that said Picard was allowed to recover only two years’ worth of withdrawals instead of six -- the period of time he thought was available. The court said that because the payouts Madoff’s firm made were “in connection with a securities contract” between Madoff and his clients, clawbacks were limited to two years.

The ruling blocked off another $4.3 billion from Picard, and it was a boon to Madoff’s early investors, some of whom had been taking profits from bogus trades for two decades or more. Investors who came late to Madoff’s plot lost their principal and didn’t get a chance to take out gains.

The two-year clawback limit makes it easier to keep more fictitious profit, as long as it is earned over a long period. “If you do a risk calculation, it lowers the risk,” Casey said.

In April 2014, U.S. District Judge Jed Rakoff barred Picard from suing some recipients of stolen money unless he could prove they had "actual knowledge" that Madoff was running a fraud; the pre-Madoff standard required a trustee to prove merely that red flags had been ignored.

That made it difficult, if not impossible, to recover money from investors who got indirect payments from the scheme, or who ignored what the trustee said were “red flags.”

Bankruptcy law also allows Picard to recover principal invested with Madoff if the recipient lacked “good faith,” and Picard said an investor’s mere suspicion of fraud is enough to allow him to recover the principal. Rakoff put an end to that by requiring a recipient to know there was fraud.

But while ignoring red flags or refusing to do due diligence may sometimes help investors keep fake profit, it can backfire if the fraud collapses before the principal investment is returned, said Kathy Bazoian Phelps, a bankruptcy lawyer at Diamond McCarthy LLP in Los Angeles.

“Burying one’s head in the sand is a dicey strategy,” Phelps said. “Courts will continue to ask: ‘What did they know and when did they know it?’ ”