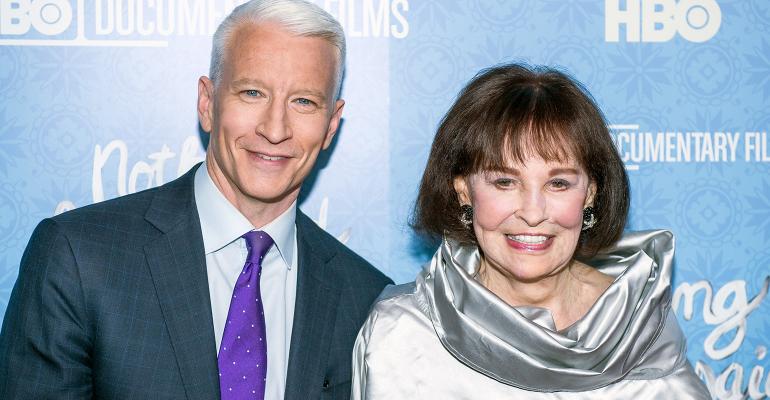 Anderson Cooper to Inherit Almost All of Gloria Vanderbilt’s Estate

The will contradicts previous reports that her celebrity son won’t inherit her fortune.

In a surprising twist of events, a will filed in Manhattan surrogate court on Monday revealed that Anderson Cooper, the CNN news anchor and youngest son of Gloria Vanderbilt, will be inheriting almost the entirety of his late mother’s estate.

It was previously widely reported that Cooper wouldn’t be inheriting a dime and that he’s all right with it, having established a brand and fortune in his own right. It’s not yet publicly known what or how much he will receive. Though Cooper will probably not disclaim the inheritance, it's possible he may choose to donate the money to charitable causes.

Vanderbilt's son from her second marriage, Leopold “Stan” Stokowski, will get virtually nothing. Stokowski stands to inherit only Gloria’s luxurious apartment at 30 Beekman Place in New York (it’s currently estimated to be worth $1.2 million), according to the document.

Gloria left nothing to her (estranged) third living son, Chris Stokowski, the younger sibling of Stan. The younger Stokowski cut off ties to the family some 40 years ago following a dispute with his mother’s therapist. Apparently, Cooper and Chris Stokowski reunited in 2016 following Cooper’s release of a film about their mother, but the status of their relationship today is unknown.

Leaving unequal shares to siblings has a long track record of causing prolonged and bitter estate battles. It remains to be seen if any of the three heirs, particularly the disinherited son, will contest his late mother’s estate.