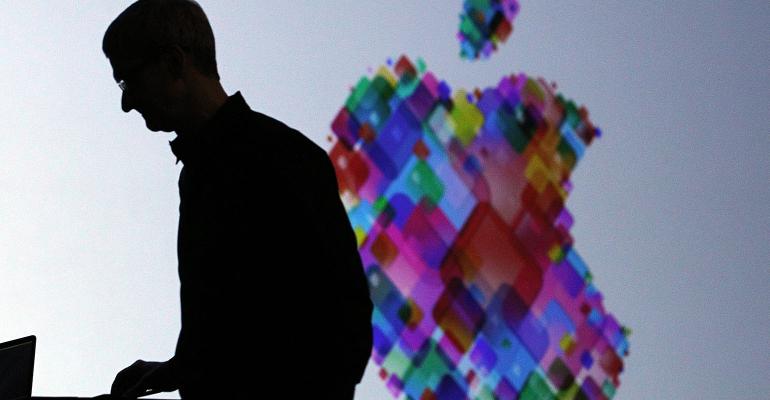 The untold story of Apple and its taxes.

Over the years, Apple Inc. has become the poster child for U.S. multinationals accused of sheltering overseas profits to avoid the IRS. What’s gone largely unnoticed is that it’s been paid more than half a billion dollars by the U.S. government to do just that.

Taking advantage of an exemption tucked into America’s Byzantine tax code, Apple stashed much of its foreign earnings—tax-free—right here in the U.S., in part by purchasing government bonds, according to people with direct knowledge of the matter. In return, the Treasury Department paid Apple at least $600 million and possibly much more over the past five years in the form of interest, a Bloomberg review of its regulatory filings shows.

The untold story of Apple and its taxes wends its way from Cork, Ireland, to New York and then Reno, Nevada. But according to tax experts interviewed by Bloomberg News, the maker of iPhones is hardly unique. Many of the biggest U.S. multinationals have seized on the same exemption, which lets them avoid or delay repatriation taxes by buying Treasuries with their overseas cash. (The top 10 alone hold over $100 billion of the bonds.) That, in effect, enables the companies to turn billions of dollars in potential tax liabilities into millions of dollars in taxpayer subsidies—all while they publicly bemoan the sky-high taxes that make it impossible for them to bring the money home.

From the government’s standpoint, “it’s as if you are paying someone to borrow a bike that’s actually yours to begin with,” said Reuven Avi-Yonah, a professor who specializes in corporate and international taxation at the University of Michigan Law School. “The whole thing is full of uneasy compromises in order to dance around the reality that most of the money isn’t actually offshore—it’s really here.”

The maneuver is perfectly legal and no one is suggesting that it’s a big money maker for Apple or anyone else at today’s low interest rates. If the companies sold the bonds, the cash would still be considered foreign earnings and subject to eventual taxation. What’s more, the interest they earn from buying U.S. debt—which helps finance government spending—is taxable.

But if nothing else, the purchases reflect how the distinction between what’s foreign and what’s not for multinationals often exists only in the world of accounting.

In response to requests for comment, Apple spokesman Josh Rosenstock referred Bloomberg to the company’s annual financial statements filed with the Securities and Exchange Commission, without elaborating further. In the most recent filing, Apple said it paid $10.4 billion in worldwide income taxes for its last fiscal year.

The Internal Revenue Service declined to comment, as did the Treasury Department, which oversees the U.S. government tax agency.

The issue of what to do with U.S. companies’ overseas earnings—which has vexed lawmakers for years—has become more urgent with the election of Donald Trump. As a candidate, Trump promised to get companies to bring back some of the $2.6 trillion they hold internationally by enacting a one-time repatriation tax of 10 percent (from the 35 percent rate).

The current exemption, spelled out in Section 956(c)(2) of the U.S. tax code, has been in place since 1962. But over the past two decades, global companies (particularly in technology and pharmaceuticals) began to use it aggressively as one way to reduce the tax bill on their burgeoning overseas profits. It states companies can repatriate income without paying a penny in taxes—as long as it is used to buy Treasuries or other U.S. securities like stocks and corporate bonds.

If a company decides to use the money for any other purpose, like capital spending, it would still be subject to a 35 percent tax. And the money reverts back to accounts designated for foreign cash if the securities are sold. (Part of the reason companies still earmark the cash as “held overseas” for accounting purposes.)

“It’s an honor system, a self-assessment system,” said J. Richard Harvey, a former top tax official at the IRS and Treasury Department, who now teaches law at Villanova University. “Many companies like Apple are very aggressive in taking advantage of arguably, loopholes in the law.”

It’s impossible to know precisely how much taxpayer money has been paid out to companies that have parked their cash in U.S. government debt, simply because the multinationals aren’t required to provide detailed breakdowns. However, based on a Bloomberg review of annual financial statements filed with the SEC, conservative estimates suggest the 10 U.S. companies with the most reported cash abroad have received at least $1.4 billion in interest payments over the past five years. Apple, which has more than doubled those holdings of Treasuries to $42 billion since 2012, received the most in interest payments over that time, the data show. In the same span, the Treasury has paid Cisco Systems Inc. roughly $430 million, while Alphabet Inc. (Google’s parent) has gotten about $160 million. (The tally excludes Microsoft Corp., Qualcomm Inc., and Coca-Cola Co., which are in the top 10 but don’t provide a detailed accounting of their investments.)

The companies in the Bloomberg review, which also include Johnson & Johnson, Amgen Inc., Gilead Science Inc. and Oracle Corp., either declined to comment or didn’t respond to requests seeking comment.

The interest payments have ballooned as they’ve amassed more and more Treasuries with their overseas profits. Together, these 10 multinationals, which control almost 20 percent of all the cash held abroad by American corporations, have boosted their investments in government bonds to $113 billion from $67 billion over the past five years, data compiled by Bloomberg show.

“If these companies don’t need the money in the U.S., there’s no incentive to give Uncle Sam” that money in taxes, he said. “What sane chief financial officer, who’s doing their fiduciary duties to shareholders, would pay money to some entity for no good reason? If there’s a moral issue, I’m not sure whether there’s immorality to that.”

Nevertheless, the purchases shed light on how multinationals have blurred the definitions of onshore and offshore earnings.

In Apple’s case, more than 90 percent of its $238 billion cash hoard is considered “overseas” in its accounting statements. Most of it belongs to the Cupertino, California-based company’s Ireland units. But like many multinationals, Apple’s cash sits in custodial accounts with U.S.-based banks such as JPMorgan Chase & Co. and State Street Corp., said people with direct knowledge of the matter, who asked not to be identified because they’re not authorized to speak on the issue.

Apple typically directs Wall Street bond dealers and big money managers like BlackRock Inc. and Pimco to buy Treasuries at debt auctions and in the secondary market on behalf of its Irish subsidiaries, all from a nondescript, three-story building in Reno, Nevada—a state with no corporate taxes, the people said. That’s where its internal investment firm, Braeburn Capital, is housed. Apple established the unit in 2005 to manage its cash and short-term investments.

As for Ireland, Apple isn’t alone. Nine of the 10 U.S. companies with the most cash abroad have foreign subsidiaries there.

Over the years, lax Irish regulations have encouraged multinationals to pursue aggressive accounting practices that enabled them to shift much of their profits to those subsidiaries and minimize U.S. tax liabilities, according to tax experts.

In one of the more notable examples that’s drawn particular scrutiny, companies will book a disproportionate amount of revenue as “offshore” by claiming the underlying technologies are owned by their Irish units—even if the intellectual property originated in the U.S.

Apple went even further. According to a 2013 report by the U.S. Senate Permanent Subcommittee on Investigations, it exploited gaps in U.S. and Irish laws so that it didn’t have a tax home anywhere.

The company is already in hot water with the European Union. Regulators ordered Apple to pay $14.5 billion in back taxes in August after concluding it paid an effective tax rate of 0.005 percent in 2014 because of preferential Irish treatment. Last week, Apple called the EU decision “seriously flawed.”

In November, Ireland filed an appeal against the ruling after repeatedly saying the country “fundamentally disagrees” with the analysis.

“They don’t want to pay taxes, but they’re using the U.S. financial system to benefit from our laws, security, productivity and all the rest of it,” said Elise Bean, the former chief counsel who led the Senate probe into Apple’s tax practices. “They’re using the money to buy U.S. Treasuries, which is so ironic.”

Using Irish subsidiaries to funnel all that cash into Treasuries may help explain a bond-market curiosity that’s emerged in recent years: how Ireland, a nation of less than five million, managed to amass $271 billion of U.S. government bonds, based on data compiled by the Treasury, and become America’s largest foreign creditor, after China and Japan.

Whatever the case, the need to address companies’ untaxed profits may be one of the few things Republicans and Democrats can agree on. During the campaign, both Trump and opponent Hillary Clinton proposed one-time tax breaks on overseas earnings (a so-called repatriation tax holiday) to help fund competing infrastructure plans.

Yet absent a wholesale tax overhaul to close the repatriation loophole, such one-offs are Band-Aids that will only make things worse over time, according to H. David Rosenbloom, an attorney at Caplin & Drysdale and the director of the international tax program at New York University School of Law.

He pointed to a similar 2004 tax holiday under President George W. Bush, which ultimately led companies to accumulate more profits abroad after it expired. Almost all the repatriated cash during that time was used for shareholder rewards and executive bonuses—rather than investment and hiring in the U.S. that many companies promised.

Last time, “it just encouraged companies to send more money abroad and wait for the next amnesty,” he said. “It would be really foolish to do.”

With assistance from Yun Li and David Kocieniewski

Methodology: Based on conversations with people with direct knowledge of the matter, estimates for the interest paid by the top 10 multinationals were made by taking the amount of Treasuries they held with their overseas cash during each fiscal year, and then taking the average interest rate on two-year U.S. notes sold at auction in each of those periods. The calculations assume the securities are held to maturity. The data exclude Microsoft, Qualcomm and Coca-Cola, which are among the top 10, but don’t provide a detailed accounting of their investments. Oracle, which holds $48 billion in cash abroad, has minimal investments in U.S. government debt.