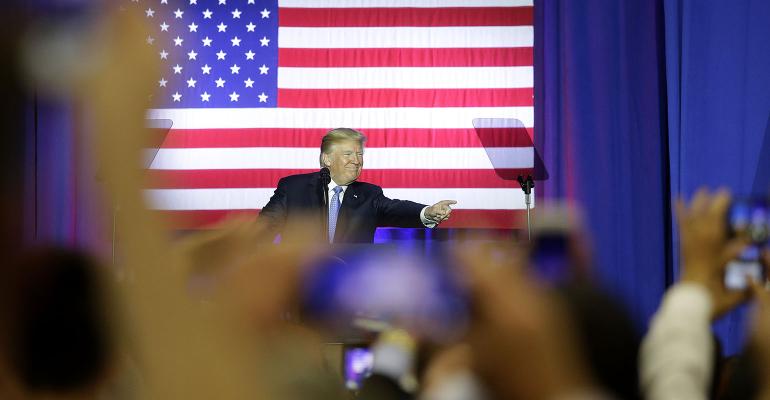 With only some reservation, most advisors expect Trump’s tax plan to benefit their clients, as well as their own businesses, according to a WealthManagement.com flash poll.

The Trump administration unveiled its sweeping plan to change the federal tax code this week, including tax cuts for individuals and corporations, the elimination of the estate tax, a new 25 percent tax rate for pass-through entities and the removal of state and local income and property taxes as deductions on federal returns.

Advisors, for the most part, were pleased with the tax outline, with nearly 45 percent indicating it will be good for their businesses, according to a WealthManagement.com flash poll of about 330 advisors. That compares to almost 39 percent who are unclear about the impact on their businesses and nearly 17 percent who believe it will be bad. Forty-six percent say the plan is good for clients, while nearly 32 percent are unclear on how clients will be affected. Twenty-two percent had a negative outlook for clients. “Tax cuts result in more money in the hands of taxpayers,” said Robert Chopping, an advisor with Edward Jones, in a written response to the poll. “Whether it is spent, saved, or used to pay down debt is all good for the country and our economy. It results in more taxpayers, and hence, more revenue. This is not a zero sum game, and certainly not a giveaway to the rich. It is not their money to give in the first place; it is ours.”

“If tax rates go down, then it is a great opportunity for my clients to pay lower taxes now than pay what they might pay in the future, especially by converting tax-deferred dollars to tax-free using Roth conversions,” said Jared Davis, an advisor with Davis Wealth Management. Some advisors were more mixed on how the plan will affect them.

“I believe the proposed tax plan would have positive and negative affects on our clients,” said Donna Murray, an advisor with South State Private Wealth. “Overall, it will probably be net neutral for revenue. Just like when the estate tax exemption went up tremendously under the Obama administration, some estate attorneys thought they would be out of business. Almost all of them have evolved in their practices to still be viable.”

Others had a negative reaction to the plan.

“It will devastate the economy by withdrawing trillions of dollars from circulation,” wrote James L. Druffner, an accountant and financial planner.

“It's a way to raise taxes on middle income people,” said Henry Frattaroli, president and founder of Wealth Management Advisors Group. “The only ones that will benefit are the rich and the poor.”

Trump’s tax plan includes a repeal of the estate and generation-skipping transfer taxes. How much impact this will have on clients remains unclear, as the collective exemption for these taxes has increased drastically in the last decade or so, currently sitting at about $5.45 million per person and about $10.9 million per couple. Unsurprisingly, very few estate tax returns are filed in any given year—roughly 0.2 percent of Americans dying in any given year are liable. However, it remains to be seen what, if any, transfer tax replacement fills the void.

Nearly 80 percent of advisors said they had at least a few clients who would benefit from the repeal. “Estate tax repeal will eliminate unnecessary purchase of huge life insurance policies, sometimes millions of dollars in annual premiums,” said Sid Jain, president of MoneyMallUSA. “It will also eliminate a huge portion of paid attorney tax and estate planning. CPAs are likely to see decline in estate tax preparation revenue. The estate tax repeal is fair for millions of small family farms and businesses. Yes, it will help the billionaires also, but their philanthropic contributions to society are staggering already.”

Estate planning attorneys were not as rosy on their outlook.

“As an estate tax planning attorney, it would kill that part of my practice, although estate planning without tax considerations would continue (e.g., Wills, Trusts, Powers of Attorney, Advance Health Care Directives),” said Eugene Gorrin, owner of The Law Office of Eugene Gorrin. “But without federal estate tax and GST tax concerns to drive business and client planning, clients will likely delay estate planning because there would be no urgency to reduce the tax impact on their estates and the amounts passing to their family and other heirs.”

The reform also includes a new 25 percent cap on taxes for pass-through entities, and according to the poll, a majority of advisors (52 percent) structure their businesses in this way. Pass-through entities, which include sole proprietorships, partnerships, LLCs and S corporations, don’t pay income tax. Instead, profits “pass through” and are taxed directly on the owners’ income tax returns. For larger entities, this is a major boon, cutting a potential 15 percent off of their current income tax bills. However, the current 25 percent tax bracket caps at about $153,000 annually, so those making less than that won’t see much impact.

The plan also includes a nebulous reference to some future legislation that will prevent taxpayers attempts to recharacterize incomes as “pass through,” to take advantage of the cap. What that preventative measure turns out to be—and if it happens at all—remains to be seen. “A large percentage of pass-through entities are small businesses—the creators of the future,” said Ken Kovalchuk, president of Financial Solutions Group. “Let the creators keep more of their money and they will create. That's what they do best.”

How do you think Trump's tax plan will affect your clients and their business? Comment below.