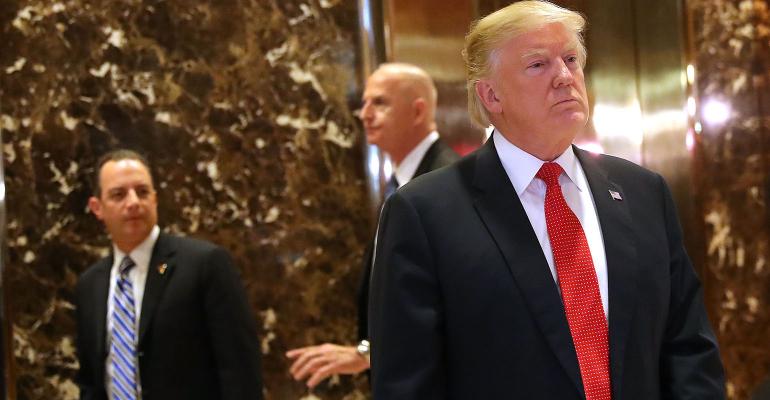 The $14 Billion Cabinet (and Counting)

Donald Trump is building the wealthiest cabinet ever, equities exposure at a record high and employees are using stock purchase plans to boost their 401(k)s.

President-elect Donald Trump is in the midst of assembling the wealthiest cabinet in U.S. history, with his appointees already having a combined net worth of more than $14 billion. CBS News reports that Trump defended his choices, stating, "I want people that made a fortune." Among his picks, according to CBS, are Education Secretary Betsy DeVos, who married into the $5.1 billion Amway fortune, and Deputy Commerce Secretary Todd Ricketts, whose $5.3 billion fortune is due to his father's business, Ameritrade. Trump has also tapped three former Goldman Sachs executives for his inner circle: Gary Cohn as national economic policy advisor, Stephen Bannon as chief strategist and Stephen Mnuchin as Treasury Secretary, according to Bloomberg. The combined net worth does not include that of presumed Secretary of State, ExxonMobil CEO Rex Tillerson. U.S. equities accounted for 80 percent of equity allocations in advisor portfolios at the end of the third quarter, a record high level in the history of Natixis Portfolio Clarity U.S. Trends Report, a quarterly report that tracks the asset allocations and performances of 306 moderate model portfolios submitted by U.S. financial advisors. That hindered performance, Natixis said, as global and emerging market stocks rallied during the quarter. The average moderate risk model portfolio analyzed by Natixis returned 3.24 percent during the third quarter, compared to 3.85 percent for the S&P 500. Average expenses declined from 83 basis points in 2013 to 69 basis points in the third quarter. Also interesting, for the first time Natixis looked at how portfolio performance relates to expenses and found that the more expensive portfolios outperformed the lower-cost ones 60 percent of the time over the past three years. Gains from employee stock purchase plans (ESPP) are helping investors' 401(k)s in more ways than one, a Fidelity survey suggests. While paying off debts was the top use of ESPP cash gains on the part of employees, reinvestment and retirement savings were the second most prominent uses of the money. Moreover, the survey found that investors in ESPPs are three times more likely to sell company stock for cash rather than borrow from their 401(k)s. “ESPPs are sometimes overlooked as a workplace benefit," said Emily Cervino, vice president, Stock Plan Services at Fidelity Investments. "As many as two-thirds of eligible employees do not participate in their ESPP. These plans are easy to use and can help workers address a variety of planned—and unplanned—expenses.”