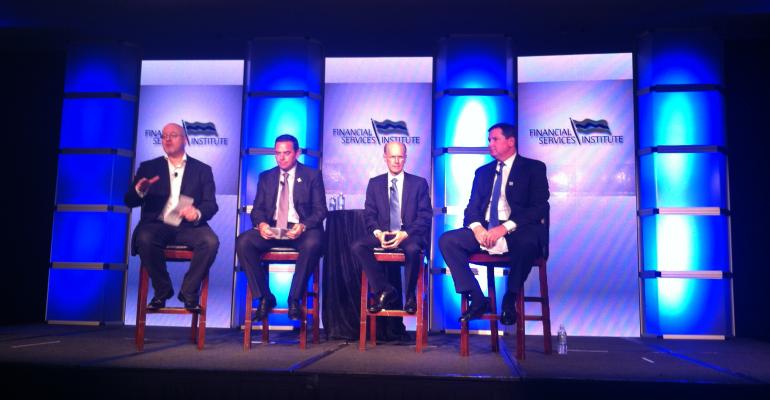 Social Media: Not All It’s Cracked Up to Be, B/D Execs Say

Although advisors are demanding access to social media at a rapid pace, broker/dealers say there's limited adoption and limited results from social media.

Although advisors are demanding access to social media, broker/dealers are now faced with limited adoption and limited results from advisors’ use of social media, b/d executives said during a panel session at the FSI OneVoice 2013 conference in San Diego, Calif.

Only 15 to 25 percent of advisors are actively involved on social media, said Brett King, founder and chairman of Movenbank.

Adam Antoniades, president and CEO of First Allied Securities, and Stephen Chipman, president and COO of Foothill Securities, said a lot of the adoption is being driven by the fear of falling behind the technology curve. The panelists discussed the opportunity created by Generation X and Y investors—the next wave of assets—who communicate electronically. Adoption of social media is coming out of fear of missing out on capturing those new clients and the revenue they can create.

“We’re driven by fear,” Chipman said. “If we can’t figure that out, there’s going to be someone looking at us in the rearview mirror.”

The problem is, even after giving their advisors access to social media, only a handful of advisors were active and having success with it. This was the case for both Antoniades and Chipman.

At Cambridge Investment Research, there is a reasonable percentage of advisors having success with social media, but the larger groups are best positioned to benefit because they can have a dedicated person in-house, said Eric Schwartz, founder, chairman, and CEO of Cambridge.

Many advisors believe that new clients are just going rain in from using social media sites such as Facebook, but that’s just not the case, Antoniades. Advisors’ main focus is still on the baby boomers and high-net-worth investors, 53 percent of which have social media access.

Schwartz said most b/ds are having limited results from advisors using it, although there are some benefits with existing clients. Some advisors have been successful at acquiring new clients with social media, but that’s because of their age. Younger advisors know how to use it and can make social media a core piece of their long-term strategy. With one team in particular, 96 percent of their contacts with clients is electronic. They have added a lot of young doctors as clients through their use of social media, Schwartz said.