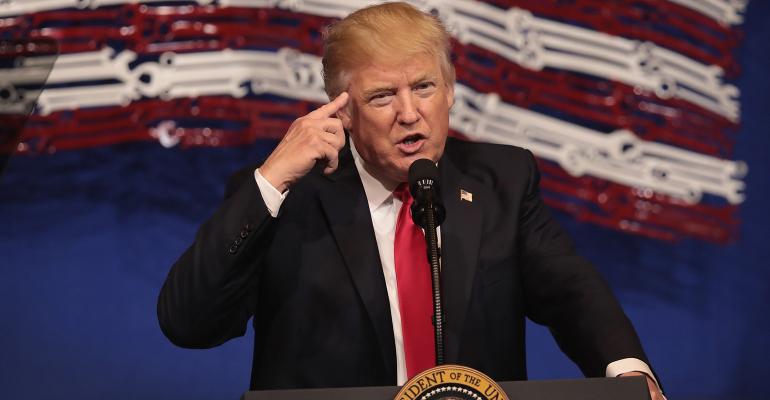 What’s Behind Drop in Treasury Yields?

Geopolitical uncertainty, as well as growing skepticism over President Trump’s reflation story, is not something risk markets like. Inversely, bond markets do.

Earlier in April, longer-end treasury yields fell to lows not seen since November 18 while short-end yields meandered, providing a flatter yield curve. The inspiration for this move was largely if not entirely geopolitical in the wake of the U.S. missile strikes against Syria, and heightened rhetoric directed to North Korea and the Trump Administration accusing Russia of covering up Syria’s use of poison gas. Needless to say, geopolitical uncertainty is not something risk markets like, the inverse of which is that bond markets do.

Further comment on the immediate driver of interest rate movement is probably unnecessary but here it goes: Adding to the above are hints (actually more than hints) that tax reform will be postponed somewhat from what was already a vague sense of timing as Trump now says he plans to finish health care reform before tax reform. As Trump put it, “We’re going to have phenomenal tax reform, but I have to do health care first.”

As the sage put it, “You say you got a real solution, well you know, we'd all love to see the plan.” The point is not to offer skepticism over health care changes or tax reforms, but rather to say that we don’t know what, where or when. To the degree that markets reacted to Trump’s victory, they are clearly showing significant signs of weariness or impatience as political realities confront election campaign rhetoric.

All of the above combine with, I suppose, Brexit and French elections, to give us an immediate sense of jitters. The manifestation of that is perhaps best displayed in the jump in the VIX index to the highest level it’s been at since November 8. Rather telling, no? A simple overlay of the VIX (and MOVE which measures Treasury market volatility) shows a reasonable inverse correlation between VIX and 10-year yields. Economic data was less of an issue or influence, but even on its own accord would not have been an inhibition to lower yields. The Fed’s Labor Market Conditions Index rose a paltry 0.4 percent — half what was expected — while Import Prices slipped 0.2 percent. Still, on balance, recent data has softened a bit and dovetails with some of the rally in rates.

None of that had much of an impact on anyone’s thinking about the Fed, though Fed Fund Futures did rally. November Funds, for instance dipped to 1.17+ percent from a peak near 1.22 percent at the close of prior week. That’s within the recent range, though at the lower end of it. It is reasonable to suggest that the front end is at least thinking about the Fed’s balance sheet; heck, everyone else is. On Tuesday, the Fed tested the waters with three small sales of MBS. While they said it was just that, a test, it was a reminder that balance sheet considerations are not far from the agenda. If the market really embraced it as a warning, the curve would presumably have steepened a bit. I merely mention it as an afterthought.

Less of an afterthought was a recent Wall Street Journal piece on business lending slowing — and how no one seems to know why. To quote that directly, “One of the great mysteries and biggest concerns is the slowing growth of bank lending.” Amongst the reasons they cited was 1) corporations issuing debt in the bond market at low rates to 2) pay down more expensive bank debt. Energy companies are specifically cited here, but that doesn’t explain the full dollar amount. There has been slowing in other lending such as mortgages, consumer loan and real estate, and, naturally, political uncertainty enters the fray.

Isn’t that last one curious? If it’s politics, then why are confidence and other sentiment measures so high? This brings me back to the conundrum of sentiment measures grossly outperforming other measures of the economy i.e., harder real data. Perhaps the simplest explanation is the best: sentiment has run ahead of reality. I’ve included a chart of Bloomberg’s Economic Surprise components at the end to illustrate the point.

While the near-term daily technicals look overbought, the weekly charts look bullish and portend lower yields still. There’s a gap in the 10-year Treasuries from 2.15-17 percent that looks tempting, though I’m on record for an edge to 2.20 percent. Note, also, that seasonal patterns are just a few weeks away from turning bullish.