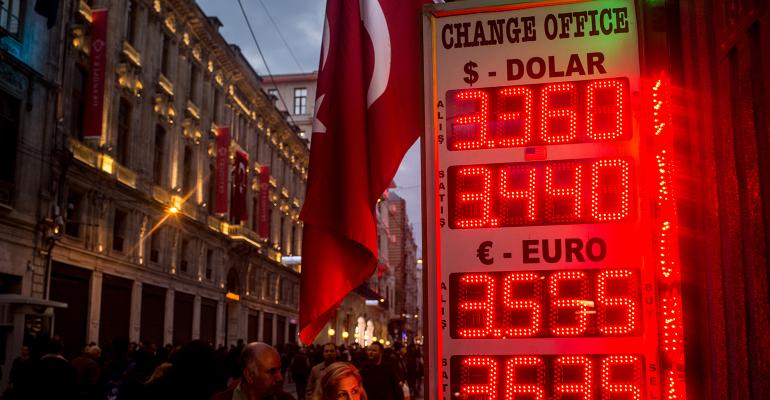 Is Turkey the Problem or a Symptom?

So far, Turkey’s problems seem contained. That could change, and quickly.

Representing 1 percent of world GDP, Turkey is punching above its weight class in the present crisis. Perhaps the reason for this is not so much the impact on Turkey itself, but the fear of contagion stemming from its predicament that could quickly spread to other countries. It raises the question, is Turkey the problem or a symptom of a wider malaise that investors should be concerned about.

Let’s first focus on the reality that this crisis could quickly spread, despite the fact that at this juncture it seems that Turkey’s destiny is undoubtedly controlled solely by its own actions, and could all be solved tomorrow if the right decisions were made. That said, one could argue that despite the intransigence of the present Turkish leadership, the seeds of the present predicament in which Turkey finds itself is caused by the increasing shortage of U.S. dollars around the world that also is affecting other countries. More on this later.

First, let’s look at the specifics of Turkey and what this present crisis means for the country. It stems directly from the intransigence of President Erdogan and the Turkish government. The refusal to release the American hostage demanded by the U.S. administration, as well as the apparent complete lack of understanding of economics and how markets work. By refusing to release the hostage, Turkey now finds itself in a trade dispute with the United States. At the very least, this discourages foreign investment, reduces growth and encourages capital to want to leave the country, and more specifically, sell the Turkish lira. Reduced trade with the U.S. also reduces the amount of U.S. dollars available to pay U.S. dollar-denominated debt. The concomitant fall in the currency has been exacerbated by the government’s lack of effort to defend its own currency by raising interest rates and conduct open market purchases of the lira. These actions itself are negative for growth, potentially explaining the reluctance of Erdogan to approve them.

However, the lack of response has consequences. Turkey’s stock market in U.S. dollar terms is down 55 percent this year, the cost of funding U.S. dollar-denominated Turkish debt has soared and the excess capital base of Turkey’s banks severely eroded, which will hamper their ability to lend in the future. Turkey’s credit default swaps, a measure of its credit market risk, have also widened sharply by 200 basis points and are now priced at over 500 bps.

In the short term, much of this deterioration could be stemmed if the authorities changed course. However in a speech this past weekend, Erdogan sounded like a modern day Macbeth when he said “You cannot say I did it” when referring to the U.S. sanctions, and showed little sign of backing down.

However self-imposed Turkey’s problems are, the fear is it  will reach a point of no return and the government loses control. If the cost of U.S. dollar debt service continues to rise, the likelihood of default also rises sharply. In the near term, most vulnerable debt maturities remain private and not sovereign in nature. If a default occurs, the biggest losers are likely to be the European banks. Italian, French and Spanish banks have large exposures of Turkish debt. The last thing the Italian banking system needs is more non-performing loans.

If Turkey’s problems are solved, the underlying issue of dollar shortage remains. The gradual dollar squeeze is caused by a combination of the Federal Reserve’s pull back of its quantitative easing program, as well as the U.S. administration’s defined objective of reducing the U.S. trade deficit using tariffs. A lower deficit will mean a decreasing supply of U.S. dollars for overseas entities. Dollars which are needed to pay off and service U.S. dollar-denominated foreign debt, among other things. A shortage of dollars, like any other commodity, naturally leads to a rising price. These dynamics are in play, and given the rhetoric of the Trump administration as well as the stated Fed policy, are unlikely to end soon. To some extent, though the spotlight is on Turkey, there are already signs that the contagion is spreading. Many currencies have also deteriorated against the U.S. dollar, in both developed and emerging markets. Argentina has seen a 38 percent decline year-to-date along with Brazil which has fallen by 15 percent in the same period. In the developed markets, the Chinese yuan has seen a decline of almost 6 percent along with the British pound down 5.6 percent. The effect of a strong dollar is also being felt in commodity prices, which have generally been flat to weak, most notably copper, which has fallen by over 30 percent since its recent June peak.

Nevertheless, despite a respite in the lira’s collapse, Turkey is running out of options if it doesn’t capitulate. The possibility of capital controls remains on the table but this would likely only make things worse and lead to defaults as companies would be unable to roll over U.S-denominated debt. To use an aeronautical term, right now Turkey is somewhere between V1 and V2 on the runway, in other words, not beyond the point of no return but rapidly approaching it if it doesn’t change course.

To conclude, while the markets focus on the problems of Turkey surmise that the barometer of stress is the Turkish lira, the real problem may reside not in the intransigence of the Turkish government, but the U.S. dollar squeeze which led to the crisis in the first place. So far stable U.S. Treasury yields and a lower gold price imply the problem is still contained. At some point, however, the U.S. may have to address the dollar shortage before it effects the U.S. economy negatively.

Graham Allen is a Senior Portfolio Manager at Tortoise.