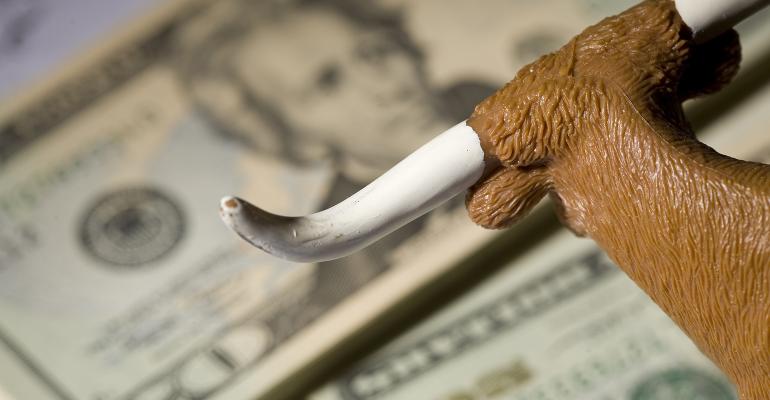 These Nine Factors Could Cause a Recession by 2020

Are we nearing the bull’s last stand?

I may be affected by the blistering humidity I’ve experienced from Lake Memphremagog to Westport, but it’s with this droopy mindset that I figured I’d talk about what could cause a recession by 2020. I do want to credit Ben Levisohn’s lead piece in Barron’s, “The Bull’s Last Stand,” for inspiration.

First, let’s start with the easy part, the yield curve. Simply, the curve is flattening quite steadily because the Fed is hiking. The long end is doing well with 30-year yields down some 30 basis points from this year’s peaks, so you can’t really call it a bear flattening but rather a tale of two curves. This is classic late cycle: a flatter curve going with Fed hikes and lower long-end yields. The curve warns that the market thinks the hikes will be effective in slowing inflation and that such curve activity can tip the economy into recession.

Related: The Trouble with Treasurys

Why is the curve helping tip the scales?—Higher borrowing rates for adjustable loans, less profitability for banks, lending restraint and, presumably, more competition from higher bond yields for what has been improving stock markets. This process seems underway, especially if you look at Treasury yields vs. S&P dividend yields.

Second, there’s these trade wars. So much has been said, it’s hard to add to the discussion other than to say when you have the likes of GM warning of job losses, U.S. farmers up in arms, and just about every economist, non-administration politician and a vast majority of CEOs opining the same way, it’s worth taking notice. Think of the impact on investment. Tariffs will lead to some self-imposed inflation, a more aggressive Fed and job losses, which seems like a reasonable set of recessionary preconditions.

Third, high equity valuations meeting profit-taking. To the extent the stock market is a proxy of economic sentiment, any allocation shifts in favor of, say, the bond market will take their toll. I too think that at these sorts of levels selling begets selling as investors strategically rebalance.

Fourth, politics here and abroad. It’s about uncertainty, nationalism, changing political agendas and disruptions to norms, which enhance the uncertainty that inhibits risk-taking. I don’t know how this will all ultimately transpire, but we have Brexit yet to confront, murmurs from Italy and mid-term elections, to name a few.

Fifth, the Fed is not the only central bank ladling off the punch bowl. It would be disingenuous for us to negate their impact on holding rates low since the great financial crisis; helping to boost, at least, risk markets and so the unwind should extract from that. Newton’s third law says that for every action there is an equal and opposite reaction.

Sixth, whether the Fed hikes three or four times in the next year, it’s fair to say they’re going to, which has bullish implications for the dollar and bearish ones for emerging markets, as we’re seeing. The softer behavior in the yuan suggests that that’s China’s other weapon against tariffs, but it does have a negative implication for their and other Asian stock markets. This harks back to an equity correction, which in this case is inspired by the correction coming from overseas.

Seventh, U.S. corporations have the highest level of debt ever. As a percent of Gross Domestic Product, at 45.4 percent, it’s also pretty much at the highest we’ve ever seen it. With spreads starting to widen, I think it’s reasonable to see investor appetite shy, especially if we see the economy start to slow. With illiquid corporate bonds in liquid ETFs, I think we are vulnerable to an “exaggerated” selloff. Note that levels of corporate debt near 45 percent of GDP preceded the last two recessions. Higher borrowing costs will inhibit buybacks that have so fueled the equity rally in these last years.

Eighth, Barron’s points out that the tax stimulus was front-loaded and starts to peter out by 2020, leaving us with the Federal debt hangover to pay for it and the Fed’s end of balance sheet reinvesting.  Which brings to mind the stock market’s behavior now; if we’re in the best point of the cycle for those tax cuts to be working, why isn’t the stock market doing better? It seems all of the above are the balancing offsets, even as we eye a 4.2 percent Q2 GDP, according to the Atlanta Fed.

Ninth, it’s been a long recovery. I allow that some say recoveries don’t die of old age, but the rest of us do, and I believe that the longer the recovery has gone on, and equity markets edge sideways, the itchier people get about taking profits and more anxious businesses get about expanding. There has been some pickup in the latter, but corporate America still seems to be using its cash for buybacks, dividends and acquisitions, rather than organic investment. I think that’s a telltale signal that they’re not so confident in growth, which inevitably brings me to our budget deficit and the ultimate need to, somehow, pay for it.  But that’s another story.