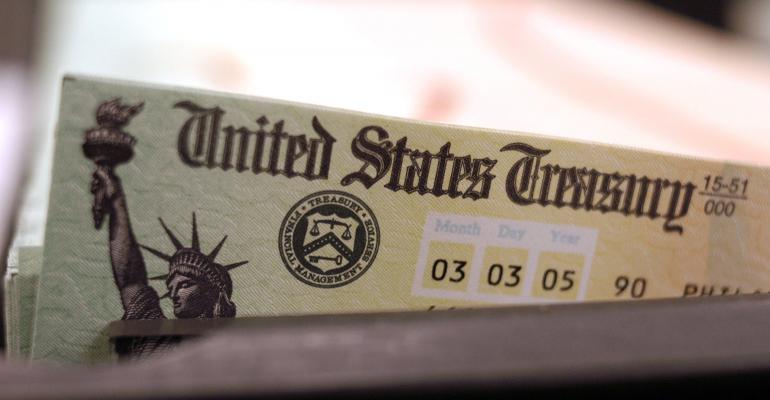 (Bloomberg) -- Charles Schwab Corp. said Treasury yields will stay low following a record-setting rally as a survey showed money managers own the most U.S. debt since the start of May.

“Yields may have hit generational lows, but it’s unlikely they will rise sharply or substantially any time soon,” Kathy A. Jones, who’s in charge of interest rate and currency analysis for the San Francisco-based brokerage, wrote on the company’s website Wednesday. “The forces holding yields down -- slow growth, deflationary pressure from abroad, a firm dollar and demographic trends -- are likely to remain intact.”

Fund managers boosted Treasury holdings to 24.3 percent of assets in the seven days ended Tuesday, the highest since the period ended May 3, according to a weekly survey of portfolio investors conducted by Stone & McCarthy Research Associates, a fixed-income research firm in Princeton, New Jersey.

Money managers differ over whether yields can extend their unprecedented decline as the U.S. economy shows improvement, while central banks in Europe and Japan consider boosting stimulus to foster inflation. Morgan Stanley, one of the 23 primary dealers that underwrite the U.S. debt, predicts the 10-year yield will drop to 1 percent in the first quarter of 2017. J.P. Morgan Asset Management says Treasuries don’t offer much value after accounting for inflation.

For an article on J.P. Morgan Asset’s views on risks in the Treasury market, click here.

The Treasury market’s 5 percent return in 2016, including the biggest back-to-back quarterly gains in almost five years, is at stake should an improving U.S. economy add to bets for the Federal Reserve to raise interest rates.

“Our positioning indices also showed that investors are getting long on Treasuries,” said Mohit Kumar, head of rates strategy at Credit Agricole SA’s corporate and investment-banking unit in London. “The bid for fixed-income assets was mostly driven by expectation of central banks’ policy action, as well as risk aversion.”

A long position on Treasuries is a bet that their prices will rise and yields will fall.

The U.S. is scheduled to sell $13 billion of 10-year Treasury Inflation Protected Securities Thursday. Consumer prices in the nation are rising at a 1 percent year-on-year rate. The Fed’s inflation target is 2 percent.

Economic data to be released Thursday include initial claims for jobless insurance, existing home sales and an index of leading indicators.

While U.S. data have been beating forecasts, futures contracts indicate a less than even chance the Fed will raise interest rates this year. The Bloomberg Economic U.S. Surprise Index, which measures the strength of data relative to analysts’ predictions, showed the numbers are outpacing predictions by the most in 18 months. Futures show 47 percent odds of a central bank move by Dec. 31.

Fukoku Mutual Life Insurance Co., which has $61.7 billion in assets, plans to buy Treasuries if 10-year yields rise to 2 percent. “I believe the Fed will hike interest rates this year,” said Yoshiyuki Suzuki, the head of fixed income in Tokyo. “They will go up -- I hope."