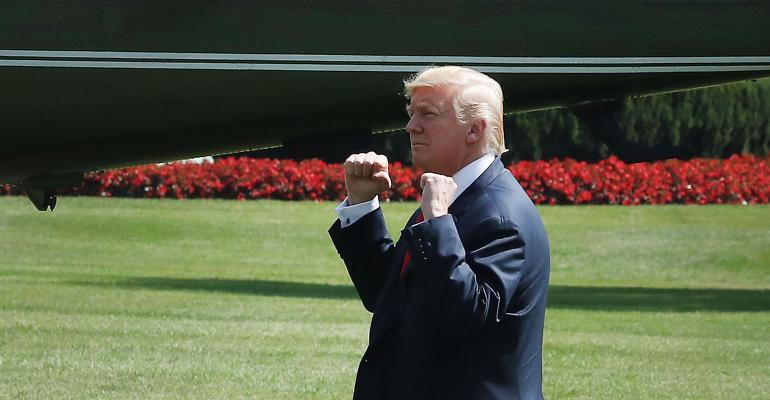 Saber Rattling No Match for Summer Doldrums in the Bond Market

I suppose that in the week just passed, the big story that kept yields from doing anything major (other than edging lower sans drama) was the rhetoric between Donald Trump and Kim Jong-un, which is notable in itself. This hints that the domestic data was worthy of a yawn, which it was, even though my take was that it points to ongoing slow-mo growth that doesn’t do a thing to threaten more-intense Fed action or provide solace to the bond bears out there. Nor, for that matter, does it do all that much for the bulls. Fence-sitters rejoice.

I’m de-emphasizing the bond rally. I’m not ignoring the gains or the data and have, for now, a somewhat bullish bias. The thing is, it still looks like a range containment for the most part. In other words, if geopolitics, low inflation figures, softish data and dovish Fed comments can’t break these narrow trading ranges, I don’t know what will. Still, in the context of the range, the latter influences give a bullish bias perhaps exacerbated by the reduced liquidity given the calendar. Out-of-office responses are rife...

Fedspeak sounded rather dovish (though I concede I may be listening too hard). Dudley spoke of the weaker dollar boosting import prices, but that it will take "some time" for inflation to rise to 2 percent. “Some time” in Fed parlance (6 to 12 months from Dudley) is longer than "some time" in market parlance. He also said sluggish productivity was dampening wage gains, which sounds a bit more dovish than he has been. Bullard meanwhile opined that 2 percent GDP growth may hold for the next couple of years, and that inflation expectations, already low, have come off with Fed hikes. Hence, there’s risk the Fed may be too aggressive on rates. Also, dovish. Evans said inflation weakness questions outlook and soft wages signal there’s some room for the jobs market to run. He adds that 2 percent inflation in the next few years is reasonable. Next few years? Really? The Fed takes a longer view of things than the market does, for sure. None of this did much to change either fed-funds futures or any expectations for when the Fed will start its glacial balance-sheet reduction.

Getting back to the geopolitical stuff, I find it telling (and surprising) that markets have not responded more to the frightening exchange between Trump and Kim Jong-un. Perhaps we’ve grown accustomed to the hubristic and narcissistic egotism of these two and simply don’t take it all that seriously. Certainly, market behavior would suggest that. I don’t know if that’s particularly comforting as these two haven’t had much experience facing off against each other, but China’s recent willingness to countenance sanctions does change the paradigm. We have little option but to watch how this unfolds, but I don’t trust complacency; I suppose, per tradition, it means buy gold and the VIX. Note too that the tension between Trump and McConnell can take a toll on confidence as well—tax breaks, infrastructure, etc.—but continues the narrative of this particular administration as being at odds with the world.

On a related topic, while much of this last week’s data was somewhat second tier compared with non-farm payroll or the consumer price index, there were some disappointments to note. Consumer credit, for instance, dipped in June. The National Federation of Independent Business’ optimism was up, but compensation plans came off, as did plans to increase capital spending and, at a reading of 2 percent, inflation remains tied with interest rates as small business’s least important problem. The Bureau of Labor Statistics' Job Openings and Labor Turnover survey shows job openings were up, but hires and quits were lower (odd, no?), while the layoffs were up a smidge.

Further, non-farm productivity continues along a very muddling path, while unit labor costs do nothing threatening on that front. Indeed, productivity was such that it warranted a WSJ front-page story saying, “Workers’ Pace Dents Growth.” Real compensation actually fell on a year-over-year basis. The Producers Price Index came in weaker than forecast, and negative on a month-over-month basis. That sort of speaks for itself.

In short, for the most part the most recent set of data doesn’t do much to enhance anyone’s bearish views, nor is it quite weak enough to inspire a major bullish bias. The sideways range dominates a while longer.