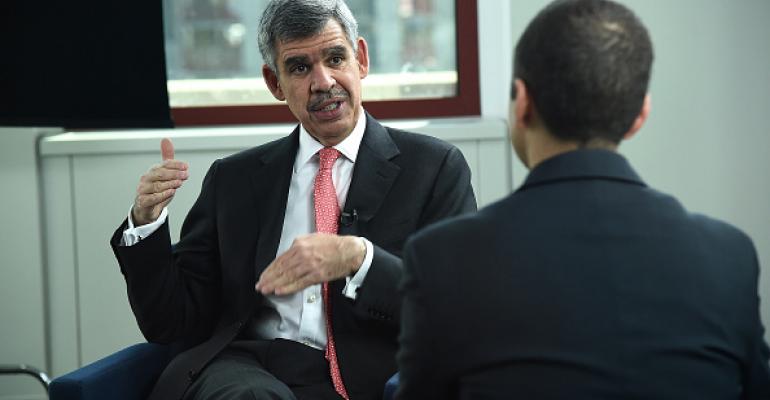 Mohamed El-Erian: In Investing, the Journey Is Not the Destination

Asset prices have decoupled from fundamentals, giving investors a smooth ride—so far. But there is a difference between the investment journey and the destination, and investors are right to be concerned about what happens when fundamentals start to matter again.

Mohamed El-Erian, 58, has seen a lot of history in the investment world through his career as CEO of market titan Pimco, head manager of Harvard University’s endowment, chair of President Obama's Global Development Council, deputy director of the International Monetary Fund, and now as chief economic advisor at Allianz, Pimco’s parent.

What strikes him perhaps most about the current investment environment, in which asset prices continue to rise, is the extent to which they have decoupled from fundamentals. The gap between the two has been filled by central banks’ quantitative easing, the large cash reserves held on corporate balance sheets and worsening inequality, he says.

El-Erian discussed these ideas and a host of others in a recent interview.

WealthManagement.com: What are the most interesting developments you've seen in the investment business during your career?

Mohamed El-Erian: The most memorable, of course, is the global financial crisis—both the period leading up to it and its aftermath. It has been a time of great fluidity, during which many improbables, if not unthinkables, have become reality.

And it is one that has repeatedly illustrated the importance of maintaining the right mix of resilience, agility and optionality. It also has illustrated the extent to which cognitive diversity and the prior use of scenario analyses help investors navigate in an unusually uncertain world.

Other interesting developments include:

WM: What kind of changes in the business do you see going forward?

MEE: Institutionally, I expect more competitive pressure on mid-size asset managers as developments on the ground favor the larger firms on one hand, and smaller specialized boutiques on the other.

Analytically, there will likely be a pickup in the move toward greater use of risk-factor analysis in formulating and tweaking approaches to return generation and risk management.

On the regulatory side, I expect a gradual increase in focus on nonbanks. And when it comes to external influences, I expect a lessening of the impact of central banks in boosting investment returns, repressing volatility and altering correlations in a manner that most asset classes have done well at the same time.

WM: Have you changed your investment philosophy over the years?

MEE: It has evolved, particularly given the impact of central banks.

This has served as part of an appreciation of the impact on markets of the unusual level of liquidity injections associated with three sources.

WM: What are the most interesting elements of the current investment environment? Is there anything that makes them unique compared with the past?

MEE: A notable development, and one that I think about quite a bit, is the extent to which asset prices have decoupled from fundamentals, with the unusual liquidity injections cited earlier acting to fill the gap between the two, at least for the time being.

This helps explain why markets have been quick to dismiss what is an unusually high degree of geopolitical and institutional uncertainty and fluidity. It helps explain why, even for long-term investors, it has been important to add a significant tactical component to strategic ones.

And it helps explain why investors have spent little, if any, time worrying about negative interest rates, the distortions imposed by central banks’ prolonged period of reliance on experimental policies, and the range of possible collateral damage and unintended consequences.

WM: What are the implications of this for the future?

MEE: One of the most important questions is whether fundamentals will improve quickly enough to validate asset prices and push them higher. Or, to the contrary, will asset prices converge down to fundamentals, with the additional risk of an overshoot that would then pull fundamentals lower?

Ample liquidity, and its soothing effect for investors in repressing liquidity and boosting returns, makes the investment journey comforting and rewarding. But it is not a destination. The destination is underpinned by economic and corporate fundamentals.

Investors are right to bet on the journey for now. But they should do so recognizing that ultimately it is the destination that matters. And, here, it is less a question of policy design and more of implementation. Put another way, it is not about policy engineering but about politics.

WM: What are the most difficult parts of investing now?

MEE: This is a really important question. From my perspective, it boils down essentially to striking the right balance among a number of potentially competing considerations:

WM: What do you think financial advisors do well, and where can they improve?

MEE: Of course, there is quite a range, with the most effective financial advisors being those who spend a lot of time understanding their clients’ objectives and are able to talk with them about both what may go right and the range of possible (and unintended) mistakes.

That includes mistakes from which a recovery is possible over time, and those where this is unlikely. And they need to do all this with an open mindset that takes into account the unusual uncertainty of today’s world.