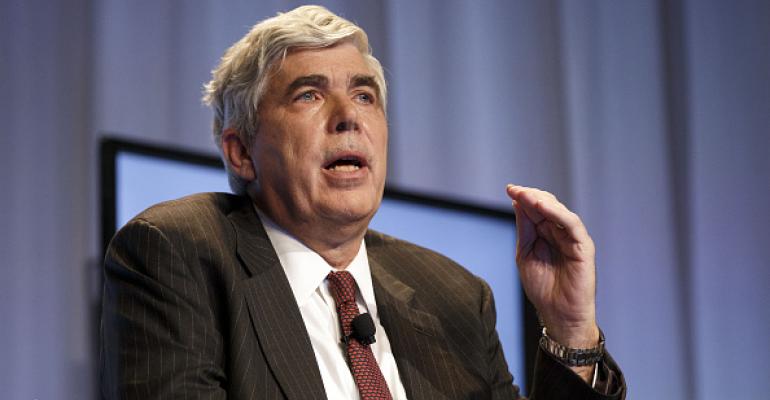 Western Asset Management's CIO on why bond indexes give active managers an edge, "stubbornly" low inflation and his counterintuitive jump into emerging markets at the dawn of the Trump presidency.

The passive/index investing craze that is dominating the stock market has infiltrated the bond market too, with passive bond mutual funds and exchange-traded funds (ETFs) seeing a net inflow of $185.8 billion during the 12 months through May, according to Morningstar.

But Ken Leech, chief investment officer of $433 billion Western Asset Management, says passive investing is unlikely to play as large a role in fixed-income as in equities. That’s because active money managers are outperforming their benchmarks much more in the bond market than in the stock market.

Leech discussed this topic and many other bond-market issues in a recent interview. He thinks now is a good time to be in emerging markets, and he doesn’t see U.S. bond yields rising sharply anytime soon.

Leech, 63, has been in the fixed-income investment business since 1977. He and colleagues from Western Asset, an independent affiliate of Legg Mason, were named Morningstar fixed-income fund managers of the year in 2004 and 2014.

WealthManagement.com: Will passive, index investing grow in the bond market like it has in equities?

Ken Leech: Indexing has spread to bonds. But we’ve been fortunate that the record of active beating passive is strong in fixed-income. The index is around the bottom quartile of the active community, in terms of performance. We’re hopeful that evidence is compelling, and that active management will continue to play a dominant role.

WM: Why have active strategies done better in the bond market than in the stock market?

KL: Bond indices themselves have a problem. Amazon becomes a bigger percentage of the [stock] index when it does well. In bonds, it’s the people who increase their debt, say Japan, that increase their weight in the index.

In addition, government and government-sponsored agency bonds make up more than half of indices. Most studies suggest that overweighting high-quality bonds with higher yields than Treasuries gives you a powerful advantage over time compared to indices.

WM: What are the most interesting developments in the bond investing business since you began 40 years ago?

KL: The biggest change has been the approach to fixed-income. Prior to then you had to go to a library to find what a bond’s coupon was. Not many people could calculate yield to maturity or calculate true cash flow. The inception of understanding the basic arithmetic of bonds came in the late 1970s and early ‘80s.

The industry then exploded in size, with product proliferation and smart people. Now there are crazy [advanced] quantitative models. That’s a spectacular change from when basic math was a real advantage in the 1970s.

WM: What caused these changes?

KL: Deregulation helped the business expand. With the spectacular inflation of the 1970s, buy and hold came under assault. That’s why active bond management came into being. It wouldn’t be so necessary in a more stable environment. The budget deficit was increasing in the early 1980s. You had fluctuations in bond markets and exchange rates around the world.

You also had the securitization explosions of the 1980s and ‘90s. Once people could evaluate building blocks of securities and then figure out what made sense for buyers and sellers, it all came together very quickly.

WM: Were all these changes for the better, the worse or were they just inevitable?

KL: They were largely inevitable. Globalization enabled people to be specific about what they want to buy or sell. And quantitative analysis advanced. All that causes the potential for financial instability as we have seen in many episodes.

But it also helps facilitate globalization and improvement of the global economy. It creates investment opportunities too. There is a myriad of securities available. It’s a key tailwind to the active investment management process.

WM: What kind of changes might we see in the future?

KL: After the mounting inflation of the 1970s, Paul Volcker talked about the need to restore price stability. That was seen as laughable at the time. We had torrential inflation. But lo and behold, he got it to happen, starting the disinflationary process. Foreign central banks got on the trend too.

So many people were confident the bond bull market would end after 5 years, after 10 years, after 15 years, etc. Now here we are after 35 years, and yields are down here at spectacularly low levels.  That’s a challenge. People need income.

The point to be made is that the story of long-term interest rates is just the story of inflation. If you say rates are going up, you’re saying inflation is going up. But the inflation rate has stayed stubbornly low. It’s a long bottoming process. That requires a different approach to fixed-income investing than when rates were higher. We see a slow bottoming of inflation. It’s a many-year process.

WM: What kind of investment opportunities are available in this environment?

KL: Our big move this year has been into emerging market debt. At the beginning of the year it looked like a counter-consensus trade. The Fed was raising rates, and President Trump was seen pursuing a protectionist trade policy.

But coming into the year, we thought there would be better global growth, with China more solid and less disinflation. Those fundamentals with unbelievable valuations were more important than the Fed nudging interest rates higher. And some of the worst-case protectionist fears may not come into play.

WM: When it comes to bond investments, what do financial advisers do well, and where can they improve?

KL: The challenge for financial advisers is the ability to think long-term rather than short-term. It’s not really the advisers’ fault. They’re responsive to their clients. Individual investors tend to underperform even indexes by large amounts because of human emotion. When the markets crater, fear rises, and people want to get out. They want to get in when prices are back up, rather than having a long-term strategic allocation.

Bonds are an important provider of stability when equities are under stress. They provide income and play an important role in diversifying portfolios. A long-term time horizon would serve people better.