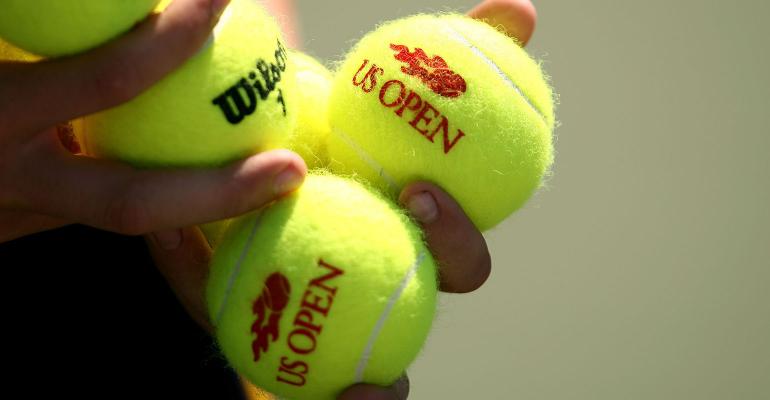 Bloomberg's bond reporter reports having fun at the peculiar contest—and a chance to reflect on the similarities between tennis and trading.

(Bloomberg) --Every year the U.S. Open hosts a special ball boy/ball girl tryout for members of the press a few hours before the serious recruits come in. The idea is to score some free publicity—say, a colorful first-person feature on the surprising demands of the job.

I’m a member of the press, with Bloomberg News. But I wonder if they knew, when they put me on their email blast (Try Out to Be a US Open Ballperson), that I’m a corporate finance reporter specializing in newly issued bonds and investment-grade debt.

As a decorated high school all-state and college club tennis player, I had dreamed of dashing across the court between Graf and Hingis, without getting arrested. I’d aimed higher, too, trying out for the women’s singles draw three years ago and taking on the top contender in the playoffs for a wildcard into the tournament. In our historic match on Court 11, she double-bageled me (6-0, 6-0) and sent me away with a T-shirt. So I figured these tryouts were my best shot at legally sharing the court with the giants.

Plus, I knew things. The Williams sisters don’t hold an extra ball when they serve, so you have to be ready to throw them one, dead on target, should the first delivery fail. After a long, grueling point, players are likely to want a towel. If you’re good, you’ll provide it before they have to motion for it. They are thoroughbreds.

Just received an email with the subject line, "Try Out to Be a US Open Ballperson"

As for the feature color, I’ll spare you and leave it at this: A tennis ball doesn’t fly like a baseball. I managed the 78-foot length of the court but struggled to repeat the act with precision. Veteran ballperson Laray Fowler, running drills for us, said, “You’ve got a good arm.” I thrilled to this, in my patriotic Polo outfit and pristine white sneakers.

Then, standing at the intersection of the service boxes and hitting balls into the net for us to scoop up in a flash, Fowler threw in some fakes, clearing the net to mimic a point still in play. I fell for her bluff and leaned forward, drawing scorn. “We got a leaner!” my proctor announced, marking down my score. At the net post, I asked if I needed to kneel, as I’d seen the greats do on TV. No, that was only for ball-tending on Ashe.

So now I’m back at the Open as a spectator, as I’ve been a dozen times. Tuesday night I filed an update of my story, “Apple, IBM Sell Corporate Debt in Busy Session as Rates Drop,” and jumped on the 7 train to see Venus play Kvitová.

I did have a sizable tranche of fun at the tryouts and, while waiting for my turn, a chance to muse on some exotic similarities between the courts in Queens and the trading floors of Wall Street.

For example, both in the market and on the court, everybody is watching the conditions. In tennis, that would be the surface and the weather. As fans of Fed (Roger Federer, silly) will tell you, there's a reason he accumulated his record eighth Wimbledon and 19th major without dropping a set this summer. His effortless game of easy power and finesse is made for grass. The court plays faster, especially in the heat, and the ball stays lower, a nasty combo for anyone trying to return one of his slice backhands.

In fixed income, it’s that other Fed we watch. The U.S. central bank is gradually raising interest rates from the historic lows it maintained after the financial crisis, creating a nice environment in which to sell debt.

Not too hard to pose once it's all done though @usopen pic.twitter.com/lGkdcruaUG

Or controlled aggression. As a former tennis coach, I taught the strategy—developing a point, waiting for the opening, and striking when the opportunity arises. Bond traders use options, waiting for the bond price to reach a certain level before striking, or buying or selling the securities. Like a barrage of cross-court forehands, it requires patience and an instinct for the window of opportunity.

Madison Keys had evidently taken a page from my playbook during her Monday night Round of 16 win over Ukraine’s Elina Svitolina. The American came out firing with her trademark power game, chalking up both winners and unforced errors and eventually taking the first set in a tiebreak. The second set went Svitolina’s way, as Keys got sloppy. In the deciding third set, though, she patiently used topspin forehands to pull Svitolina off the court, ending the point with a winner when the timing was right.

Maybe I’m just in the grip of my new obsession. There was a ton of construction going on throughout the Open, including a grand entryway and the makings of a new Louis Armstrong Stadium with a retractable roof. “How did you guys pay for all this?” I asked Tina Taps, the U.S. Open ballperson director, on my way out.

She referred me to a colleague, who got to the bottom of it.