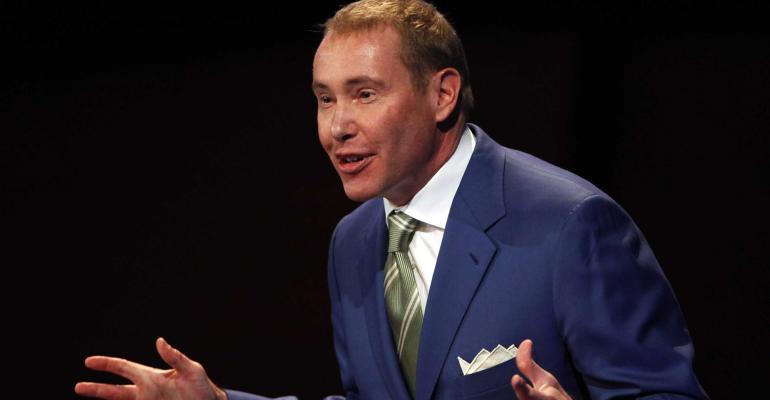 It’s better to be cautious now than to hold on until it’s too late, DoubLine Capital's CEO warns.

(Bloomberg) --Jeffrey Gundlach sees too much of a good thing -- in financial markets and in his industry -- and he wants no part of it.

The co-founder and chief executive officer of DoubleLine Capital LP says risky assets such as junk bonds and emerging-market debt are overvalued. He’s reducing those positions in DoubleLine funds and investing more in higher-quality credits with less sensitivity to rising interest rates, mindful that doing so may mean he gives up some performance for a while.

Gundlach, 57, says he can’t predict what event or development will trigger a change in investor sentiment. Like Howard Marks, the co-chairman of Oaktree Capital Group LLC, who last month warned that markets had crossed into “too-bullish territory,” Gundlach says it’s better to be cautious now than to hold on until it’s too late.

“If you’re waiting for the catalyst to show itself, you’re going to be selling at a lower price," he said in a phone interview Monday from DoubleLine’s office in Los Angeles. “This is not the time period where you say, ‘I can buy anything and not worry about the risk of it.’ The time to do that was 18 months ago.”

‘Turning Money Away’
Gundlach is taking a similarly conservative approach to building his eight-year-old firm. While some competitors embrace the mantra “size matters,” he believes there’s a limit to how much DoubleLine can manage well and says the firm may stop marketing altogether once assets reach $150 billion, up from about $110 billion today.

That attitude is out of step with an industry that prioritizes asset growth, both as a means to generate more revenue and as a way to defray fixed expenses such as technology and compliance. Janus Capital Group and Aberdeen Asset Management Plc each combined with other firms in part to gain scale. Vanguard Group has more than quadrupled its assets to $4.4 trillion in less than a decade, and in an interview in March, Larry Fink, whose BlackRock Inc. oversees $5.7 trillion, said “scale has become a greater necessity -- and for us a greater advantage.”

Bill Gross once managed a single fund with $293 billion in assets, the Pimco Total Return Fund. By comparison, Gundlach, who co-founded DoubleLine in 2009, said he’s debated whether to close the $54 billion DoubleLine Total Return Bond Fund, the firm’s largest, to new money.

“We can’t do $100 billion in the Total Return Bond Fund,” he said. “The market isn’t big enough for our style, the things we invest in.”

That fund has invested largely in mortgage-backed securities and returned 3.5 percent annually for the past five years, outperforming 92 percent of its peers as measured by Bloomberg. In 2016 it trailed the benchmark Bloomberg Barclays US Aggregate bond index for the first time, a lag Gundlach said was mostly because the fund doesn’t invest in corporate debt.

He also said a decline in the Total Return Bond Fund’s assets from $62 billion last September, traditionally seen as a warning sign, reflects a decision to concentrate less on a single product. While other firms discounted fees to lure more investors, DoubleLine sought instead to attract assets to its other funds, including the Core Fixed Income and Shiller Enhanced CAPE, both co-managed by the firm’s deputy chief investment officer, Jeffrey Sherman.

“I don’t want one $150 billion fund, I want 10 $15 billion funds. A diversified business,” Gundlach said in the interview. “We lose business because our fees are too high and I say, ‘Fine, that’s a way of regulating growth.’”

DoubleLine has adapted the “smart beta” programmatic approach to investing in stocks, first used in the Shiller CAPE fund, to a similar product for European markets, and Gundlach said the next step may be a global stock fund.

DoubleLine’s funds have consistently outperformed their peers. That’s what appeals to investors even if its fees aren’t the industry’s lowest, according to Todd Rosenbluth, fund research director at CFRA, a New York-based investment research firm. An example is the SPDR DoubleLine Total Return Tactical ETF, which has continued to attract assets and has a $3.4 billion market cap.

“People were driven to buy a Gundlach-driven portfolio -- DoubleLine-driven, not just him,” Rosenbluth said. “As long as the firm follows the same approach and delivers the same return, I think investors are going to be very pleased.”

Gundlach started DoubleLine after a dispute with management at TCW Group led to his ouster and prompted a legal battle. Oaktree took a 20 percent stake. When DoubleLine’s Total Return Bond Fund hit $50 billion in 2015, many speculated Gundlach had ambitions to build a giant firm.

Instead, his goal is to keep DoubleLine small enough that it can continue buying a range of assets at good prices and outperform its benchmark indexes and peer funds. Anything larger would require a corporate infrastructure at a "totally different level" and many more employees than the more than 200 DoubleLine has now, Gundlach said.

“To get to $300 billion, I think you need a thousand people," he said. "You need offices in Beijing and Mumbai and London, because you really have to go big on sovereign wealth funds and a lot of wholesalers in the retail industry. And it just becomes a very big company, and I don’t want that."

Currently, DoubleLine has only two corporate offices, its headquarters in Los Angeles and an outpost in Tokyo, where the firm oversees about $1 billion in assets. Gundlach said his strategy has Oaktree’s full support.

The challenge right now is figuring out how quickly to dump lower-quality but higher-yielding assets in favor of safer securities that return less. In the meantime, Gundlach said he recently bought five-and eight-month put options on the S&P 500, positions that could generate returns of 400 percent if the index drops by enough.

"Volatility is about to go up," he said. "That’s my highest-conviction trade right now."

Gundlach took such concerns to Twitter last week, cautioning his some 32,000 followers that bond investors were buying into “riskier and riskier" strategies. More recently he’s been tweeting about a potential news story -- a “fake news ruse" -- he expects will be critical of DoubleLine and which he believes is being motivated by a competitor. He declined to identify the rival firm in the interview.

The complacency in markets is understandable. Gundlach acknowledges that there are no obvious signs of a recession within six months, the only thing he says would bring about a major correction in asset prices. Everything from consumer confidence to employment to gauges of manufacturing health are strong.

He expects the Federal Reserve to raise rates again in December and in successive quarters so long as the data are supportive. He doesn’t see the unwinding of the Fed’s balance sheet as a threat because Chair Janet Yellen and others have communicated their plans “extremely well.”

Also, while optimism for tax reform and infrastructure spending have faded, Gundlach said it’s not clear when doubts about the Trump presidency will start to weigh heavily on investors.

“I don’t see the big drop, unless there’s something out of left field, like some sort of really escalating conflict,” he said. “I think you’re supposed to be gradualistically moving toward the exits.”