The uptick in risk appetite and expectations and another rate hike is less than a month away chased some money out of U.S. Bond Fund groups.

Fixed income investors branched out, in a cautious fashion, during late August. A week after U.S. Bond Funds were the only major geographic group to attract fresh money, Emerging Markets Bond Funds snapped a four-week run of outflows and Asia Pacific Bond Funds posted their biggest inflow since the first week of February as EPFR-tracked Bond Funds collectively recorded their ninth inflow in the past 10 weeks.

At the same point last year Global Emerging Markets Bond Funds were the best performing group, up 6.7 percent going into September, while Europe and Asia Pacific Bond Funds brought up the rear. This year Europe Bond Funds are the second-best group in performance terms while GEM Bond Funds are off over 7 percent. 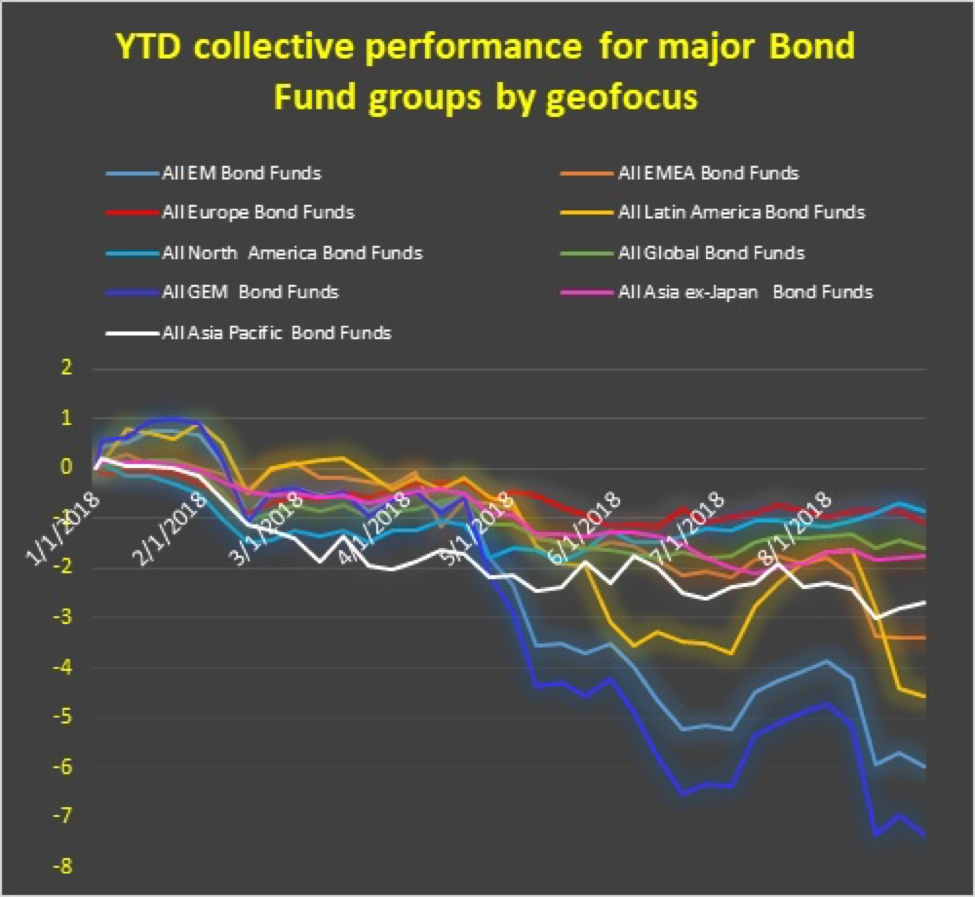 Much of the pain being experienced by Emerging Markets Bond Funds stems from the tightening of U.S. monetary policy, with another hike in U.S. interest rates widely penciled in for next month. David Ader, Informa Financial Intelligence’s chief macro strategist, believes that the dovish interpretation of U.S. Federal Reserve Chief Jerome Powell’s remarks at the Fed’s annual Jackson Hole summit, which helped fuel the modest rebound in EM Bond Fund flows, is wrong and the odds of a another hike in December are higher than many believe.

Asia Pacific Bond Funds, meanwhile, benefited from investors perception that the Bank of Japan may be closer to tapering its highly accommodative monetary policy than previously thought. If true, the blanket effect of its asset purchases on Japan’s bond market could be lifted. Flows to Japan Bond Funds hit a 42-week high.

The uptick in risk appetite and expectations with another rate hike is less than a month away chased some money out of U.S. Bond Fund groups. U.S. Short Term Government Bond Funds posted their biggest outflow since early June and Mortgage Backed Bond Funds chalked up their fourth outflow in the past six weeks. Flows to U.S. Inflation Protected Bond Funds did climb to a seven-week high and Municipal Bond Funds took in fresh money for the fourth week running.

Among the major multi-asset groups Balanced Funds recorded their 12th consecutive outflow, their longest run since 1Q09. Since mid-2009, however, this fund group has absorbed over $285 billion in fresh money and seen assets under management grow five-fold to $2.4 trillion.